“We stand not at a crossroad, but at a precipice.” — Atty. Jose Manuel Diokno

MANILA — Impunity, according to human-rights lawyer Jose Manuel Diokno is the “dark side of accountability.” It is, he said, a thousand guns aimed at perceived enemies of the state.

Impunity, said Frank La Rue, a Guatemalan academician and the UN Special Rapporteur on Freedom of Opinion and Expression, is a state policy. La Rue cited as reasons for the prevalence of impunity: a weak state, state negligence, or a conscious policy of the state. By not investigating a case, the state gives the message that it could be repeated over and over again. Thus, said La Rue, impunity multiplies geometrically. 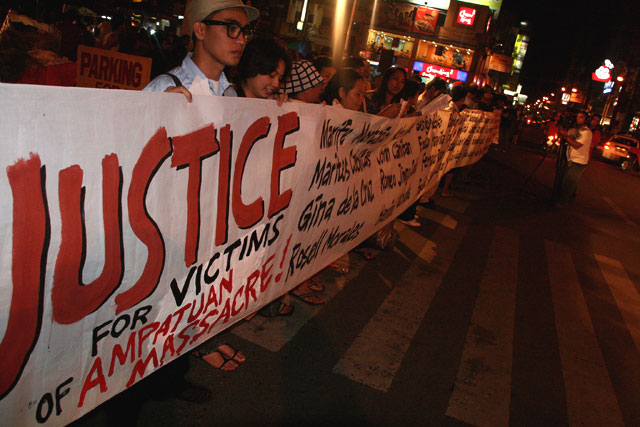 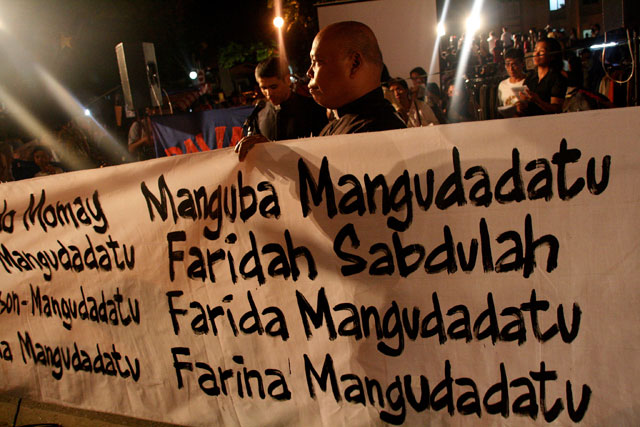 To end the culture of impunity in the country is the call of Bagong Alyansang Makabayan Southern Mindanao as they spearheaded a protest rally and liturgy together with the National Union of Journalist of the Philippines and other progressive groups gathered around Rizal Park, Davao City a day before the 1st anniversary at of the Ampatuan Massacre that killed 58 individuals. (Photos by Jose Hernani / bulatlat.com)

To stress his point on impunity, Eric Mallonga of the University of the Philippines (UP) College of Law and the UP Law Center Institute of Human Rights, cited the massive violations committed during the implementation of the counterinsurgency program Oplan Lambat Bitag during the administrations of Cory Aquino and Fidel V. Ramos and how this “total war” policy of the Philippine government and the Armed Forces of the Philippines is being implemented up to now.

This was how impunity was defined and dissected in a forum with the title “Journalism Asia Forum 2010: Media and the Culture of Impunity,” which was held at the Manila Hotel last November 23 and was sponsored by the Southeast Asia Press Alliance (SEAPA). The Center for Media Freedom and Responsibility and the Philippine Center for Investigative Journalism are the Philippine members of SEAPA. Representatives from Indonesia Ms. Bina Bektai of Tempo, a Jakarta based news magazine, and Thailand Mr. Anucha Charoenpoh, a senior reporter of the Bangkok Post shared their experiences with impunity in their own countries. The forum was also participated in by SEAPA delegates from the different Southeast Asian countries such as Malaysia, Myanmar, among others.

While the forum was meant to discuss the problem of impunity in the killings of journalists — especially on the day which marked the first year anniversary of the Maguindanao massacre that claimed the lives of 58 people, inlcuding 32 journalists — and the legal remedies available in the pursuit of justice, it could not help but touch on the whole question of justice, or the lack of it, in the country up to the present.

To end impunity in the country, Diokno, Mallonga, and La Rue were one in saying that there is a need to pursue justice and strengthen the justice system in the country. 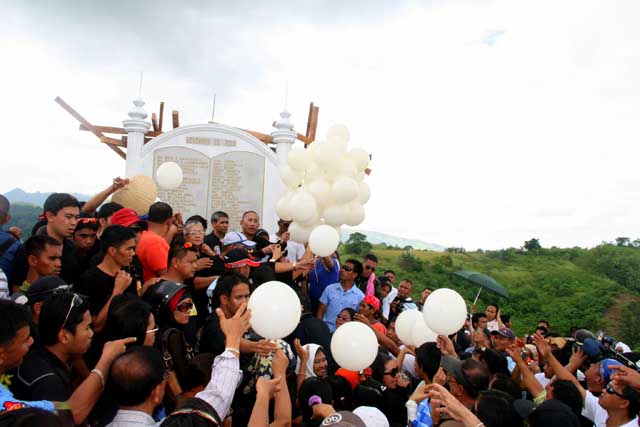 In the massacre site, progressive groups join the families of the victims of the Ampatuan Massacre in commemorating the 1st anniversary as they call to end impunity, to seek justice for all of the victims of human rights violations in the country and to trial former president Gloria Macapagal Arroyo as the primary violetator. (Photo by Jose Hernani / bulatlat.com)

Diokno pointed to the excruciatingly slow grind of justice in the country as the reason behind the dismal record of convictions of those responsible for the killings and the need to amend the rules of court through legislation or by an act of the Supreme Court. Specifically, Diokno said, the courts should allow the “perpetuation of testimony” so that witnesses could have their testimonies recorded immediately to be able to move on with their lives. According to Diokno, a case that normally takes two to three years creates a tremendous amount of pressure on the witness who has to endure being under confinement for his or her protection while the accused roams freely. What happens is that witnesses decide to get out of the program and are either killed or intimidated. He also pushed for the strengthening of the Witness Protection Program (WPP). Not like in the US, Diokno said, the Witness Protection Program in the Philippines does not provide for the relocation of witnesses and their families. After the case, the witness is practically left on his or her own. Mallonga added that not only are there very few convictions, those convicted are only the truggermen and not the masteminds. He also batted for the plugging of loopholes in current laws and available remedies.

La Rue said the formation of an international body such as the Comision Internacional Contra Impunidad en Guatemala that would investigate the killings of journalists and activists could contribute a lot in pursuing justice for the victims and strengthening the state and its justice system toward ending impunity. However, he said, it would require a lot of humility on the part of the government and the president to admit that the justice system is weak and that it needs outside assistance. Also the government needs to formally request for a partnership with the United Nations and to solicit the support of a group of funders.

Meanwhile, La Rue said, to push press freedom forward, there is a need to decriminalize the freedom of expression, referring to laws that constrict it such as laws on libel and censorship.

On the other hand, journalists should professionalize and be accountable to the public, not to the state because that would constitute censorship, said La Rue. Journalists should also be wary of media conglomerates, which control what and how news would be broadcasted and published.

In any case, La Rue stressed, violence against journalists must end, citing reports that the Philippines ranks first in the list of countries with the most number of cases of violence against journalists. Joining the Philippines in the top five are Somalia, Iraq, Afghanistan and Mexico. Somalia is under a violent civil war; Iraq and Afghanistan are being occupied by the US, which has been encountering stiff resistance from local armed groups; in Mexico the drug war has turned increasingly violent.

The speakers called on journalists, organized groups and the general public to continue the fight against impunity. “We stand not a crossroad but at a precipice,” Diokno concluded. (Bulatlat.com)