MANILA — The kuliglig is one of the quickest ways to go in and around Metro Manila’s inner streets. It can navigate the smallest alleys with ease.

If only the struggle by the drivers of these uniquely Filipino contraptions to keep their jobs and livelihood were as trouble-free.

In fact, the efforts to keep the “linyas,” or what passes for a public-transport route franchise, for the kuligligs have been arduous for the many people who earn primarily from owning and driving these vehicles.

“(Manila Mayor Alfredo Lim) did not give us any jobs. We were the ones who found this. What is his right to take it away from us?” Fernando Picorro, spokesman of the Alyansa ng Nagkakaisang Pedicab at Kuliglig Drivers ng Maynila (ALNAPEDKU), said in a press conference on December 2. Picorro and his group urged both the local and national government to act in the interest of poor people like the kuliglig drivers. 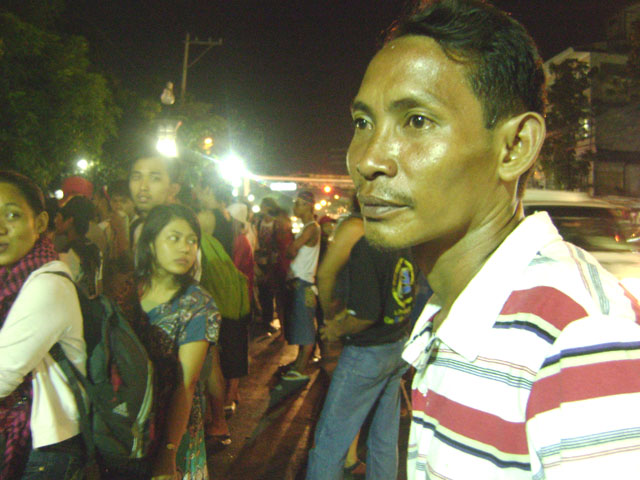 Through Executive Order Nos. 16 and 17, Lim banned kuligligs from Manila’s main streets. He altogether banned the kuliglig from the streets of Ermita. Both executive orders were issued on September 2. But in an interview, Picorro said the city government “did not conduct any consultation with us.”

EO No. 16 stipulates that the engines that the kuligligs use could not be registered with the Land Transportation Office. It said there has been “mounting complaints against their continued operation as they cause pollution and contribute to the worsening traffic situation.” The EO No. 17, on the other hand, states that banning the operation of three-wheeled vehicles from Ermita would meet the “need to maintain road sanity and full compliance with all traffic rules.”

Under the EOs, drivers would face heavy penalties each time they are caught by the police plying the city streets. “If we experience hardships whenever we fail to ply the streets for just a day, how much more for a week or for a month if our kuligligs were impounded?” Picarro asked.

Picarro said the kuliglig drivers are very much willing to work on a compromise with the Manila local government. “We are willing to be regulated if there is a fair ordinance that would be passed,” he said. “But for that to happen, Lim should first recognize (kuliglig) as a mode of public transportation.”

So far, the least that Lim has offered, via television interviews, is for kuliglig drivers to “simply remove” the kuliglig engine and to revert to manual pedaling. “But that is impossible. Kuliglig units are custom-built for the engine. It is heavier and bigger than ordinary pedicabs,” Picorro said.

Kuliglig drivers have lobbied with city councilors, even among their village officials, to stop to Lim’s order to phase out kuliglig and other three-wheeled vehicles in the city. Picorro said that there were some councilors who have expressed support to them but were unwilling to put up a fight and side with the kuliglig drivers for fear of “being singled out by the city government.”

On Nov. 25, the kuliglig drivers filed a petition before the Supreme Court to issue a temporary restraining order, prohibiting Lim from implementing EOs 16 and 17. Their petition states that Lim does not have the authority to exercise police power as stipulated in Republic Act 7160 or the Local Government Code. “Police power is properly vested, and may only be exercised, by the City Council of Manila, through the passage of ordinances,” their petition read.

Picorro said the EOs did not provide substantial reason to ban the operations of the kuligligs. In their petition, they said it is “patently obvious that any vehicle that runs on the road contributes to the traffic load, and any vehicle with emissions contributes to air pollution.”

Picorro pointed toward United Nations Avenue in Manila: “You would not see a single kuliglig but the traffic load remains heavy.” As for air pollution, the petition also stipulates that each kuliglig unit would have to undergo and pass emission tests at accredited testing centers by the Manila Tricycle Regulatory Office before they are issued permits.

The petition also highlights due process in confiscating properties. EOs 16 and 17, as the petition stipulates, failed to provide a definition of what a kuliglig is. As a result, “a traffic enforcer will have to rely solely on his own discretion to determine whether or not a certain vehicle is banned or restricted in given thoroughfares.”

“It leaves everyone and anyone vulnerable to an infringement of rights without due process of law,” the petition said.

Leaders and members of the drivers’ alliance have tried to contact and hold a dialogue with Lim so that they could present their counter-arguments on the two orders. On Nov. 15, however, only Lim’s chief of staff and a lawyer faced the drivers. “They remained firm that the city government will phaseout the kuligligs,” Picorro said.

On the night of Nov. 30, kuliglig drivers held a protest vigil in Liwasang Bonifacio. They trooped to the Supreme Court the following day to ask for a temporary restraining order.

After that, the drivers went to the Mehan Garden, a park beside Manila City Hall. Picorro said they were demanding for a dialogue with Lim. But, just like in their previous attempts to talk to him, it was only his chief of staff and lawyer who faced them. The police also wanted to drive them away and told them to hold their protest actions far from the city hall.