Children Hold Rally for Peace Based On Justice

The Children’s Rehabilitation Center (CRC) had documented six cases of frustrated killings, four victims of torture, two illegal arrest and detention, two victims of rape and 136 children affected by forcible evacuation during Aquino’s first five months in office. In all these cases witnesses tagged state military forces as the perpetrators.

MANILA – Theirs looked like the usual rally in Mendiola except that majority of the participants were children aged nine to 17. A few five-year-olds brought along by adult guardians and child rights advocates were also there. In what was billed as Children’s Solidarity Action, some 150 children staged a rally at the Mendiola Peace Arch last Sunday. Its emcees and speakers were children; only three guest speakers were adults from the Gabriela Women’s Alliance, Salinlahi or Alliance for Children’s Concerns, and the Children’s Rehabilitation Center (CRC).

The Children’s Solidarity Action is a Salinlahi tradition started in 1995, said Liberty Dipon, president of the group’s Council of Leaders. 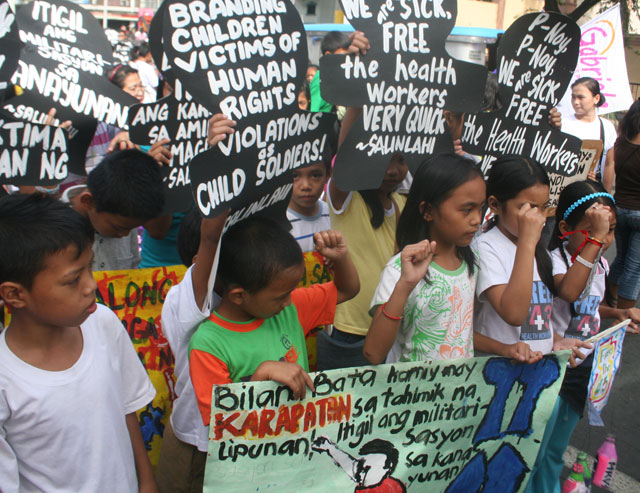 Unlike the usual rallies, the protesters’ placards also consisted of more colourful tapestries and artworks, which the children said they themselves have made. Are these children merely being used by adults for their own ends? Organizers from Salinlahi explained that the messages being said in the rally, the skits being presented by the children, and the demands being aired by child speakers in the program came from the children themselves. They have held a year-long activity including workshops and discussions in different urban areas in Metro Manila. In other regions outside of Metro Manila, other workshops were held directly involving children who were orphaned as a result of extra-judicial killings, or who had witnessed it. 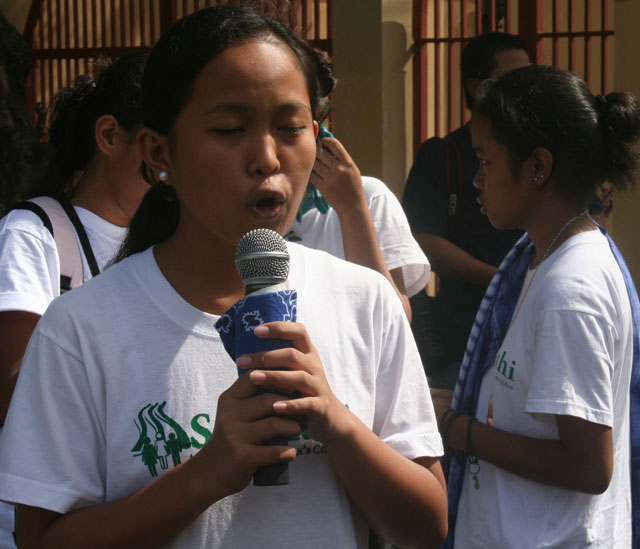 Clarissa Nocido, 15, has been a member of Salinlahi for barely a year. She said that she feels for every story her fellow children share in their workshop-discussion. She cited as example the story of Ading, who had told them of how their entire family were driven out of their hometown by relentless military harassment. “It hurts us, too. We also feel it,” said Nocido. 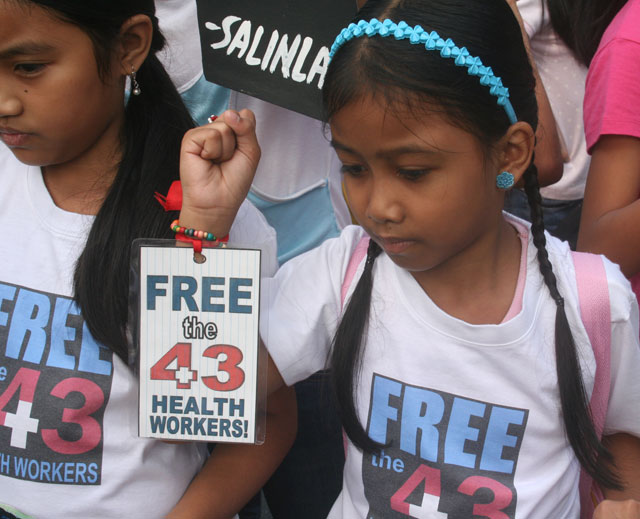 Some children appeared nervous and were quick to laugh at themselves during the two-hour program, where they took turns telling stories about how Filipino children are “still deprived of their basic rights to survival and development.” Some were taciturn while others readily answered questions such as why they joined the rally.

Gerald Andres, 11, from an elementary school in Batasan Hills, Quezon City, stepped out from among his giggling, shy friends to tell Bulatlat that he joined the rally because like the other kids with him, “I, too, want to fight for our rights.”

Like adult ralliers, the children chanted various calls. They demanded “Decent Housing, Not Violence,” “Put an End to Militarization in the Countryside,” “Jobs for Mom and Dad, Not Violence,” among others.

No Change Under President Aquino

“Under Aquino, a lot of people remain poor and many children still can’t go to school. Many children are still being forced to work instead of going to school or playing. Many still get accused of being child soldiers,” Kai Ra Cabarong, 13, said in a speech before the children ralliers. 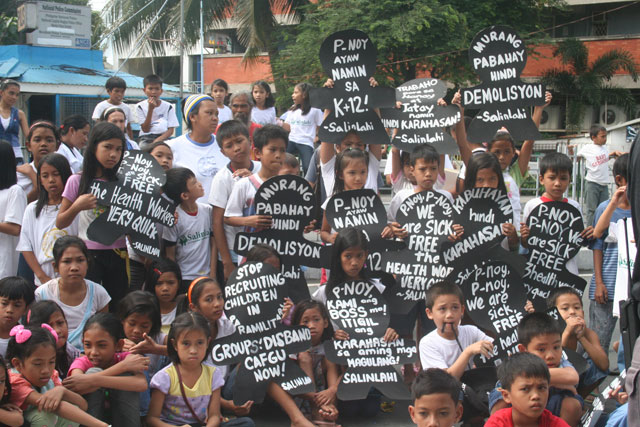 A first year high school student from PUP, Cabarong denounced the budget cuts on state colleges and universities and the “so-called solutions such as the K+12, which is not a solution at all.” Given the low quality of education, Cabarong said the proposed additional years of required education will only make it more costly for parents to send their children to school.

“This year, even with the advent of Noynoy Aquino’s presidency, the plight of Filipino children continues. We find him guilty of having neglected Filipino children by having no clear agenda pertaining to their welfare,” said Dipon.

In fact, Aquino “shows no difference from his predecessor when it comes to the record of grave child rights violations that happened under his watch,” Dipon said.

The Children’s Rehabilitation Center (CRC), a Salinlahi member-organization, had documented six cases of frustrated killings, four victims of torture, two illegal arrest and detention, two victims of rape and 136 children affected by forcible evacuation during Aquino’s first five months in office. In all these cases, witnesses tagged state military forces as the perpetrators.

“We have also received reports of minors being recruited to join the CAFGU either by means of force or by joining ‘young adult organizations’ such as the YMCA, said Dipon.

Ading also criticized soldiers for their habit of “courting female minors in our community.” A similar complaint has been aired against the military in other provinces. 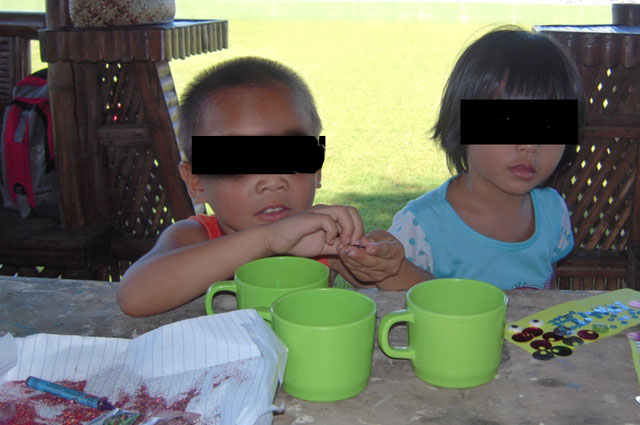 Losing a parent to EJK is a personality-changing tragedy. (Photo Courtesy of CTUHR / bulatlat.com)

In the island of Negros, one of the priority areas in the government’s counter-insurgency operations, groups of child rights advocates have found out through workshops with children survivors of killings that “it is clear to children here who their enemies are.” That it is the military who is killing their loved ones and driving them out of their homes and causing their hunger.