According to Gibe, the gunfire lasted about 20 minutes. He crawled and hid in the buttress of a tree near Tree No. 4. When the gunfire stopped, he saw men in military uniform with firearms and ammunition approaching their place. After the gunfire stopped, Borromeo was not moving while Co and Cortez were already dead.

Balute was able to run away from the place of the shooting.

Gibe said if he moved, he could have been hit. “I didn’t have the opportunity to run because I felt that the guns were aimed low because there were bullets hitting the tree where I was hiding. I could see the bark of the trees being sliced by bullets.”

When he saw the soldiers approaching, Gibe went out with his hands up and said, “I am here; They are with me, we are not enemies!” 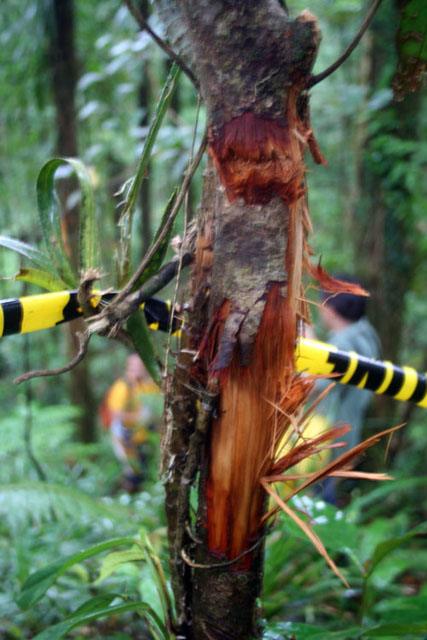 The bark of this tree has been shed off due to intense firing.(Photo by Anne Marxze D. Umil/ bulatlat.com)

Then the soldiers told him to step out of hiding and put down his firearm. They asked him where his two companions carrying firearms went. He said he had no firearm nor his companions. He pleaded to the soldiers to bring his wounded companions to the hospital, but he was ignored. Then Gibe was told by the soldier to “lie down and look away.”

For two hours, Borromeo was left lying on the ground with a gunshot wound near his heart. Gibe said he could still hear Borromeo moaning and moving. It was only by around 2:00 p.m. when the soldiers administered first aid on Borromeo. Gibe was told to get up and proceed to pad W403. At around 3:00 p.m., Gibe heard from the soldiers that Borromeo was already dead. The bodies of Co and Cortez were also brought down to the pad.

“The failure of the military unit involved to provide immediate medical attention and hospital treatment to Borromeo prolonged his agony and ultimately led to his death. The military waited at least one hour after they approached Gibe before bringing down the bodies and the survivor despite repeated requests from Gibe and Borromeo, who was still alive then,” the team said.

Tutaan said that at around 12:30 noon, a unit from the 19th IB led by 1Lt. Ronald Odchimar chanced upon the NPA, and an exchange of gunfire ensued. According to Tutaan, the gun battle lasted for some 10 to 12 minutes.