MANILA — The year 2011 started not with a bang but a lot of whimper – whimper, that is, from many Filipinos who complain about tough times ahead.

Much of the discontent so far is focused on the increasing cost of transportation. There’s the 300-percent increase in the toll fees for the South Luzon Expressway (SLEX); because many of the capital’s produce are sourced from the south, this inevitably raised as well the prices of certain goods, such as vegetables.

There’s the increase as well of the flag-down rates of taxis and the hike in the prices of basic commodities such as sugar and flour.

Then there’s the increase in MRT and LRT fares, which is eyed for implementation by March 1.

The only thing that doesn’t increase, many minimum wage earners complain, is their salary, which in Metro Manila is pegged at P404 (less than $10) that barely covers the most basic necessities of a small family.

Shirley Pascua, 35, a housewife, thinks that the poor are getting poorer under the administration of President Benigno S. Aquino III. “He is proving to be a disappointment. The price of everything is going up,” she told Bulatlat.com.

Pascua’s husband is a taxi driver. She said what he makes is barely enough to make ends meet. They have two children; Adrian, 13, and Marielle, 12. “It’s a good thing my eldest is in a good school. If not for his scholarship, we will not be able to send him to a school like that,” Pascua said. Her youngest will also apply for the scholarship in the same high school. 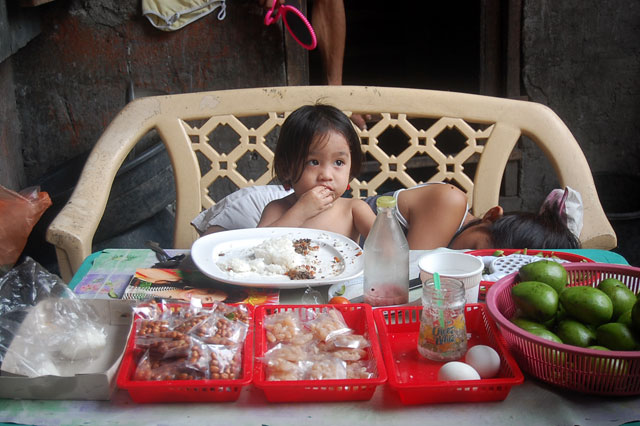 A child in the slum community of Isla Puting Bato. Many like her are certain to suffer more as prices of basic commodities shoot up. (Photo by Ayi S. Muallam / bulatlat.com)

Her husband’s take-home pay is barely enough for their daily needs. “I just hope that none of us gets sick,” she said, noting a concern raised by many poor Filipinos.

Rowena Lopez, 34, is also a housewife with seven children. Her husband is a jeepney driver who earns P700 a day. She said the increase in prices of basic commodities affects their budget especially with seven mouths to feed. “We make do with what my husband earns,” she said.

A consumer buying vegetable at a Quezon City market told Bulatlat.com that all prices are going up but not their salaries. A 40-year-old government employee said there is nothing left for to save, what with all prices going up.

In a statement, Bagong Alyansang Makabayan (Bayan) secretary general Renato Reyes said this week that “no MRT fare increase can be deemed ‘reasonable,’ not when wages have remained nailed to the floor and not when prices of other commodities and services are also increasing.”

One of the 1.2 million commuters that will be affected by the MRT fare increase is Vincent Tolosa, 20, a systems engineer. He was stunned upon learning that the MRT and LRT will implement a 100-percent increase on March 1. He said the increase in MRT fare will affect his budget. He is a regular passenger of both MRT and LRT. “It will be a huge deduction from my earnings,” he said.

Even a non-regular passenger of MRT sympathizes with the rail commuters. Anikka Yap, a 20-year-old student, said the current fare is affordable. “There will be many regular passengers of MRT if the fare hike is implemented,” she said.

Yap noted the hassle in riding the MRT, especially during the rush hour when huge numbers of people are lining up in stations. Asked by Bulatlat.com if she believes that the fare hike will help to improve the rail services, as claimed by the government, Yap replied: “No. It will still be same old, same old.”

A 72-year-old regular passenger of MRT, Bert Santos, laments that the government doesn’t seem to care for the poor. “Nothing seems to be stopping them from increasing the prices of everything. All they think about are themselves while the poor suffer,” Santos said.