You Are Here: Home → 2011 → January → 16 → The Slaves of Madagascar: Abused OFWs Repatriated for Fighting for Their Rights

The Slaves of Madagascar: Abused OFWs Repatriated for Fighting for Their Rights

Kentz, a major contractor that operates one of the world’s biggest nickel-cobalt refineries in the world, is accused of mistreating its Filipino workers, one of whom the company allegedly kidnapped to prevent the other abused workers from protesting.

MANILA — Among the small community of overseas Filipinos workers who were recently repatriated to the Philippines runs a joke that is at once funny but bitterly ironic: Madagascar is known for its beautiful animals and how well these are supposedly treated. These animals are more fortunate than the Filipinos who worked there, in one of the largest nickel-cobalt mining refineries in the world.

“Madagascar was supposed to be a place where the most beautiful animals can be found,” said Eleutario Cusi, one of the dozens of OFWs who were recently repatriated after suffering abuse and mistreatment from their employer. But, he added, this was also a place where “the proud and hardworking OFWs are treated almost like animals.”

Cusi’s co-worker, Albert Costes, 46, was one of those who suffered such abuse and is now trying his best to correct the injustice. Having been allegedly duped and mistreated, Costes and the others are pursuing their case against their former employer and their cohorts before the Philippine Overseas Employment Adminsitration (POEA), seeking to blacklist them, to prevent them from abusing workers like them in the future.

On January 11, Costes and the others filed cases before the POEA to blacklist Kentz Engineers and Constructors and the local employment agencies that hired the workers: EastWest Placement Center, Omanfil International Manpower Development Corp., and Krisalis Construction Company. The workers accused these companies of unfair labor practice and for removing them from work and repatriating them to the Philippines.

Kentz, which operates in nearly 30 countries for nearly a century, employs more than 2,500 Filipino workers, according to reports.

Costes had arrived in the Philippines from Madagascar the day before. He said he decided to join the OFWs’ struggle against their former employers because an injustice had been committed them.

Being an OFW is not new to Costes; he has been one since 1999, when his children were still small and when his wife was still alive. Costes was forced to work abroad, such as in Dammam, in Riyadh and in Qatar, out of the need to survive and to secure a brighter future for his family. 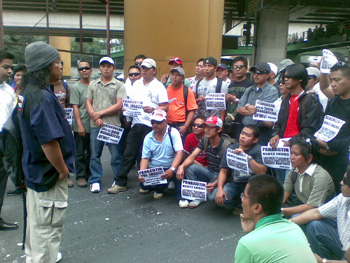 OFWs from Madagascar protest at the POEA on Jan. 11. Costes is at left, with the bonnet (Photo by Janess Ann Ellao / bulatlat.com)

“I had no choice. Although I was employed, I was only earning the minimum wage, which was roughly P380 a day,” Costes told Bulatlat.com in an interview. “There was no way that it could meet my growing family’s needs.”

When his wife died from a vehicular accident in 2008, Costes worked even harder for their three children. The following year, he landed a job in Madagascar as a piping foreman at the Ambatovy Project, nickel-cobalt mining refinery that is one of the largest in the world. At that time, the company that hired Costes, SNC Lavalin, was still working with Keangnam, a South Korean contractor that directly managed the operations at the mining site.

Costes said Keangnam treated workers like him well. Though their work requires much physical strength, Costes felt that it was all worth it as he and the others were compensated properly, including overtime pays. They worked for eight hours a day at a rate of $4 an hour. Their salary was directly deposited to their bank accounts in the Philippines. Food and lodging was also provided them. Workers took their offs on Saturdays and Sundays and during holidays, as prescribed by Madagascar laws.

“All was well,” Costes said. In August 2010, when he returned to the Philippines for a short vacation, Costes was already hearing gossip that Kentz would come in to replace Keangnam. Costes was actually happy  about the news, thinking that since Kentz is a bigger company, the workers would continue enjoying their rights and privileges, probably even receive better benefits.

Costes was supposed to return to Madagascar in September but his former recruitment agency told him that they could not deploy him any longer due to the change in management. Undaunted, he approached another agency, EastWest Placement Center, to help him return to Madagascar. He left the Philippines on October 29, 2010.

Costes was surprised to learn, upon arriving at tge project site, that they would now work 10 hours a day. Kentz did not compensate them overtime pay for the two extra hours even though Madagascar labor laws prescribe only eight hours of work a day. The workers are also required to work for six days a week and would no longer enjoy holiday breaks.

“It was very tiring. Our work demanded so much physical strength from us. If machines could no longer fit into the small tunnels of the mining site, we had to go and do things manually,” Costes said in Filipino. “It is hot (inside the tunnels). Every inch of our body ached after every work.”

While they were given free accommodation, Costes said that since Kentz handled the operations, their quarters, which he called barracks, became overcrowded and was so small there was hardly enough space between beds for people to pass through.  There were also times, he said, that workers could no longer take their meals because so many workers lined up to get their food and there was very limited time for their lunch breaks.

According to Costes, Kentz also assigned tasks to workers even if these were not their within their capabilities and qualifications. Carlito Velasco, a welder, became a structural crew. Roland Villena, an electrician, became a material controller.  Rolando Ancog, a steel erector, became a manlift operator.

The company also did not give due medical attention to an ailing colleague, Rey de Lima, who had suffered a mild paralysis while working for Kentz. He was not brought to the hospital where doctors could check  whether or not his medical condition had arisen due to his work, Costes said.