OceanaGold’s FTAA covers 17,626 hectares of mineral lands in Didipio. In December 2008, OGC stopped their mining development in the area because of financial trouble, disapproval of local government units, and strong community resistance. The situation reached a critical point in October 2009 when in an attempt to demolish several houses, more than a hundred PNP members used truncheons, shields and tear gas to disperse residents protesting the operations. Among those who fought against the demolition team were the mayor of Kasibu and the baranggay chairman.

After a review of all information and documents it gathered, the CHR declared that OceanaGold had committed a number of violations against Dipidio residents, including their Right to Residence, Right to Adequate Housing and Property Rights, Right to Security of Person, Right to Freedom and Movement and the Right not to be subjected to arbitrary interference. The CHR said that the company also violated the residents’ right as members of an indigenous group to manifest their culture and identity. 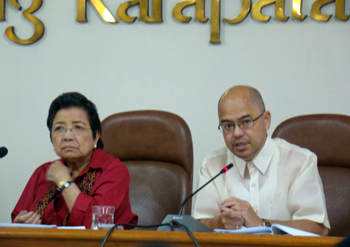 CHR chair Etta Rosales and Commissioner Jose Mamauag, who said the commission’s finding is a “wake up call” to other mining companies operating in the Philippines. (Photo by Ina Alleco R. Silverio / bulatlat.com)

A ‘Wake up Call’ to Mining Firms

Commissioner Jose Manuel S. Mamauag said the resolution should serve as a “wake up call” to all other mining corporations. He said that the Dipidio case throws light on how mining firms address the welfare of the people in the areas where they have operations.

“This entire case makes us ask for whom is national development for. Does it serve national development to throw away the cultural identity of our indigenous brothers and sisters? The policies that allow corporations to mine or harvest our country’s natural resources should be regulated for the sake of the indigenous peoples and even those who do not belong to indigenous groups. We should say a firm ‘no’ to giving blanket authority to any agency to allow mining firms to operate without seeing first what is best for communities, for residents, for the environment,” he said.

An Ifugao leader in Dipido, Tolentino Inlab, hailed the resolution, saying that it validated their complaints. “We suffered much because if OceanaGold’s operations. It’s good that the CHR took our side against it,” he said.

Another resident, Lorenzo Pulido, said that because of the CHR’s intervention in 2008, the company’s abuses let up.

“Now it has resorted to negotiating wth us, the community residents, trying to convince us to give up the land. We don’t care to listen to what they have to offer – we have seen enough of OceanaGold,” he said.

Pulido expressed hope that with the release of the CHR resolution, the mining operations would come to a complete halt. “This is what we really want. No number of promises about development and improvements in our livelihood and income can ever be enough. We don’t want this kind of development that comes at such a huge cost to our lives as indigenous peoples, and at the expense of the environment.” 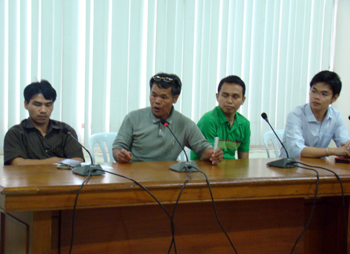 In June 2008, residents filed a complaint with the CHR, asserting that the mining company illegally and violently demolished some 187 houses in Dipidio. Residents said the company did this without securing writs or special orders of demolition from the court. Company representatives also facilitated the demolition unaccompanied by the sheriff, without payment of just compensation, and without providing alternatives or options for relocation or resettlement for the residents.

The demolition was also said to have been attended by unnecessary violence and destruction: residents said that when they resisted and defended their homes, they were beaten up by members of the demolition team. Houses were run over by bulldozers or set on fire. In their complaint to the CHR, the residents also said OceanaGold fenced off large sections of the roads and pathways which residents have been using for the past 30 years to transport produce from their farms to the market. The mining firm also set up checkpoints around the baranggay, causing unjust restrictions on the social and economic activities of the residents.

It was also reported that the Philippine National Police (PNP) Regional Mobile Group served as a ‘private security force’ for OceanaGold, and policemen were stationed inside the company premises.

In its resolution, the CHR said it would recommend to the Aquino government to consider the probable withdrawal of the FTAA granted to OceanaGold in view of the gross violations of human rights it committed.

It also said that it would require all concerned agencies, particularly the National Commission on Indigenous Peoples , the Mines and Geo-Sciences Board of the Department of Environment and Natural Resources, the PNP and the Armed Forces of the Philippines to submit reports to the Commission regarding the concrete actions they have taken to respect, protect, and fulfill the rights of the people in Dipidio within 30 days after they receive copies of the resolution.

The Commission also said that the company was also guilty of endangering the community’s water resources and the residents’ access to clean water.

OceanaGold’s gold-copper mining projects intends to produce 120,000 ounces of gold in its first 10 years of operation which also amounts to at least 3.846 billion liters of freshwater that would be expended every year for the next 10 years.