In last Wednesday’s hearing, the Employers’ Confederation of the Philippines (ECOP) and the labor department’s National Wage and Productivity Commission (NWPC) aired the same scenarios that had been debunked in past hearings in past congresses.

These projections were amplified by the director general of ECOP, Vicente R. Leogardo, who told the hearing that majority of Philippine firms are micro-small enterprises that cannot afford paying increased wages.

But all these dire projections have been belied both by empirical evidences and in previous deliberations in Congress, said Bayan Muna Rep. Teddy Casiño. “In past congressional hearings, we have found out that any increase in wages is very well compensated for by improvement in purchasing power”. 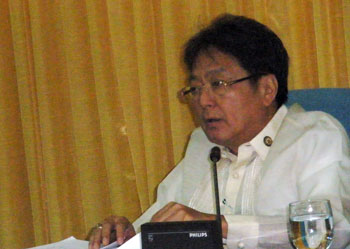 Sonny Africa, research director of Ibon Philippines, a non-government think-tank, cautioned the House sub-committee against relying on technical simulations, such as those the NEDA, NWPC and ECOP have cited, because these are not based on reality. The reality, in fact, based on an International Labor Organization wage study, is that in the Philippines, there has been an insignificant unemployment effect from minimum wage raises.

As for the problems being faced by micro to small enterprises, the government is advised to balance the incentives, privileges and subsidies being extended to foreign investments with that of the domestic and homegrown industries, rather than ignore the long-delayed nationwide wage hike. According to the Center for Trade Union and Human Rights (CTUHR), a non-government labor rights advocate, the government should help micro, small and medium enterprises (MSMEs) cope by removing policies that favour big corporations and disadvantage them.

It is not true also, said CTUHR’s Daisy Arago, that a legislated P125 wage increase will drive away investors. In an ADB study in 2008, foreign investors were reported to be discouraged from doing business in the Philippines not because of wages. The leading causes why investors leave are government incapacity, poor infrastructures including poor transport, lack of power and public works.

Tug of War Between Profit and Wages

Ibon’s Sonny Africa also urged the House Sub-Committee on Labor Standards not to be swayed by “commonsensical arguments.”

“The way the economy functions is different from the way an individual firm functions. True a firm may find it difficult to function at first – but a national economy has dynamics far beyond that of an individual firm. A peso you will pay your worker will go to fares, food, etc – the aggregate effect of a wage hike is vast,” said Africa.

With the Ecumenical Institute for Labor Education and Research (EILER), they asked Congress to speedily legislate P125 wage hike, because a “P125 wage hike will strengthen aggregate demand and help create a more viable domestic economy.”

According to Anna Lea Escresa, executive director of EILER, an across-the-board wage hike “will benefit most vulnerable sectors who are earning less. It will create a ripple effect.” Even if the wage hike will affect only the formal sector, in due course even the informal sector workers will benefit, said Escresa. In the end, she reasoned that a nationwide wage hike will benefit the MSME – who indeed make up most of the establishments in the country. “Majority of them are in consumer production. (So) If you raise the workers’ purchasing power, which you’ll do when you raise the wages, it will largely go direct to consumption which will ultimately benefit the MSME.”

In short, the dim projections of more unemployment, shutdown and economic contraction as a result of wage hikes are at best only theories that have not been proven. Meanwhile, even the ILO has been raising the alarm over the fact that even professionals in the Philippines are getting lower wages and joining the ranks of the poor.

The direct impact of wage increases is reduction of profits, not reduction in employment, said EILER’s Escresa. As such, the issue of wage hike is a “tug of war” between those who seek to increase their profits and those whose wages are shrinking.

From 2001 to 2009, Africa said profits in the Philippines increased by 552 percent but the average basic pay from 2001 increased by only 31 percent “This is essentially a profit versus wage thing,” Africa said of the “grossly exaggerated” simulations against wage hike. With whom will the Congress side in the end?

“Congress’ action on the wage hike bill will be an assessment of Aquino’s sense of duty to Filipino workers,” said Anakpawis Representative Mariano. “If the Belmonte-led Congress tries to block the P125 wage hike bill like what former President Gloria Arroyo and her allies did in the 13th Congress, then Aquino will be adjudged as Arroyo – anti-worker and pro-capitalist.”

Toward the end of last Wednesday’s hearing, Rep Cosalan conceded that “we will have more hearings; we will be able to submit it to the floor for the deliberations.” Marathon hearings in the Visayas, Mindanao and Northern Luzon or Bicol may also be held soon, according to Bayan Muna Rep. Casiño, to gather more views and participation in legislating a nationwide across-the-board wage increase.