Some 300 teachers from all over Quezon City, Manila, Taguig, Malabon, Caloocan and Pasig marched from the Sandigan Bayan offices to the House of Representatives on March 15, 2011 and called on lawmakers to support, approve and pass House Bill 2142, or” An Act Upgrading the Minimum Salary of Public School Teachers from Salary Grade 11 to 15.”

The proposal is authored by Alliance of Concerned Teachers (ACT) Teachers Partylist Representative Antonio Tinio. If approved, it will raise the entry-level monthly salary of teachers from P15,649 to P24,887 ($356 to $566) .

Quezon City High School teachers Corazon P. Recto and Generosa M. Cureg have been teaching for 11 and 13 years respectively, and both say that their campaign for higher wages is not only an economic issue, but a fight for their dignity as well. 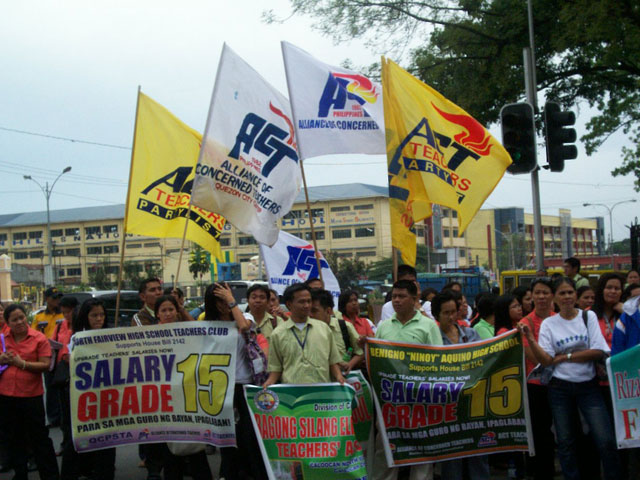 “The national government keeps saying that education is a top priority, but it keeps neglecting teachers. If you want to approve the system of education, you have to first ensure the welfare of your educators. Every year the government points out how it gives education the lion’s share in the national budget, but it’s clear that teachers have been left out in the cold when it comes to apportioning the budget,” said Recto.

Cureg points out that teachers are among the lowest paid government employees. 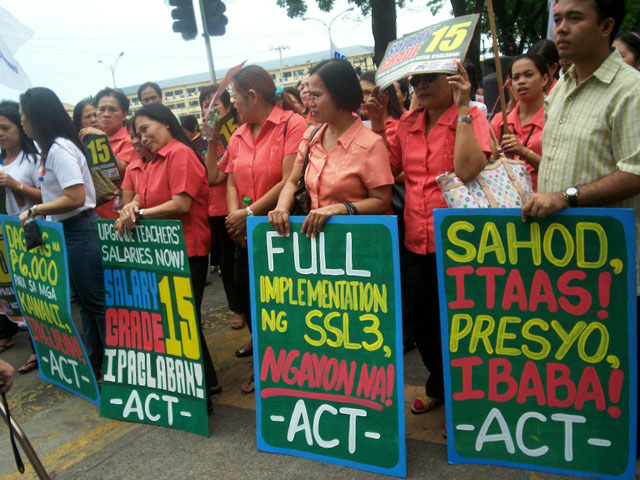 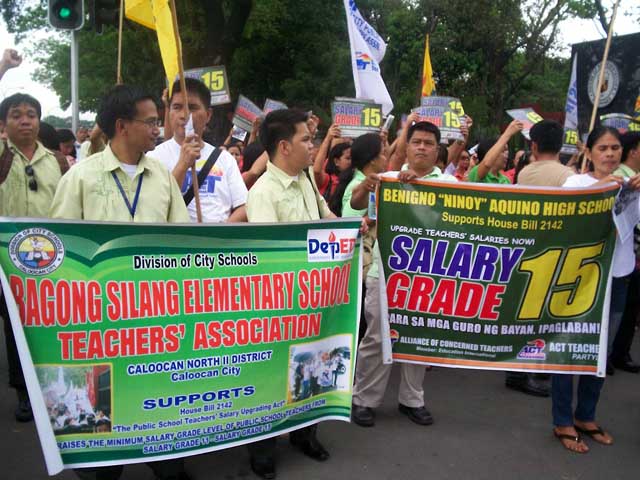 “There is no doubting our commitment to the teaching profession. We consider teaching as a genuine vocation; but it really hurts to see how respect is sorely lacking in how the government views us. Why do we have to take to the streets to demand for salary increases? Why are there so many teachers deeply in debt? This is a sorry state of things that need to remedied, “ said Cureg.

Act vice-chairperson Benjie Valbuena said that if Malacanang really cares about teachers, it will prioritize measures like HB 2142 and call on its allies in both congress and the senate to support the bill.

“But Malacañang hasn’t lifted a finger to help teachers. President Benigno Aquino III is all for increasing the salaries of members of the Armed Forces of the Philippines (AFP), but he isn’t interested in helping improve the welfare of teachers, “ he said.

“The combat duty pay in amount of P240 per month being received by members of the AFP assigned in the field units is not commensurate to the sacrifices and difficulties which our troops experience,” the EO read.

It was also stated in the EO that members of the AFP who figure directly in actual combat should be adequately compensated in as much as their assignments threaten their lives.

Aquino also vowed to provide proper health and housing benefits for soldiers and work on the increase of their monthly salaries.

“Teachers may not be in the combat zone like soldiers, but daily we devote our lives to teaching the youth and ensuring that the next generation of Filipinos receive the best education the public school system can offer. We face our own set of challenges, dealing with the rising costs of living, regressive tax measures, and almost inaccessible social services,” said Jack Bacabac, vice-president of the Quezon City Public School Teachers Association.

According to Bacabac, their demand that teachers’ salary levels be raised is reasonable and just. 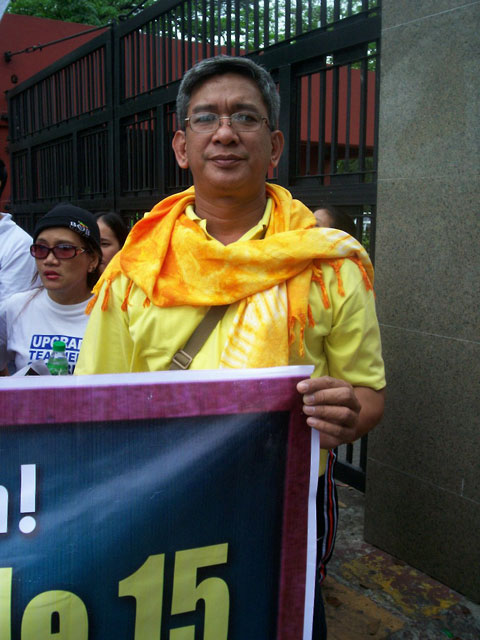 Mr. Jack Bacabac, QCPSTA vice-chairman said “We are not demanding the moon and the stars ; we are demanding only what is rightfully due us.” (Photo by Ina Alleco R. Silverio / bulatlat.com)

“We are not demanding the moon and the stars ; we are demanding only what is rightfully due us,” he said.

“This is a far cry from the P15,649 ($356) monthly salary of a level one Teacher. We have not even taken into account the effects of the oil price hikes and the increase in public transportation fares when we make a final computation of what’s left of teachers’ salaries after taxes, loan payments and contributions to Philhealth and the Government Service Insurance System have been taken out,” he said.

A Move to Prevent Brain Drain

After the rally, the delegation of teachers went to the congress plenary hall and listened to Rep. Tinio deliver a privilege speech on the issue of just compensation for teachers.

In his speech, Tinio said his measure was a means to encourage all government teachers to stay in the country, give what is due them, and not push them to seek better pay and working conditions overseas. He said that because of low wages, many teachers are forced to leave the profession and go abroad to work as domestic helpers. “Brain drain is happening because the government is unable to take care of its professionals including those in the teaching profession,” he said.

Tinio said Republic Act No. 4670 or the Magna Carta for Public School Teachers sets the criteria for salaries of public school teachers to make these at par with those in other occupations requiring equivalent qualifications, training, and abilities.

He said the current pay scheme for teachers is not competitive with most other positions in government.

“A duly licensed professional teacher occupying the entry-level position of Teacher 1 with a monthly salary of P15,645 ($356) earns substantially less than a high school graduate who enters the Philippine Military Academy (PMA) as a cadet, with monthly salary of P21,709 ($494),” he pointed out.

Because of pittance salaries, the teacher turned lawmaker said teachers resort to borrowing, making them heavily indebted to government financial institutions such as the GSIS, private lending institutions or loan sharks.

“Government efforts to upgrade the educational system cannot succeed unless the plight of public school teachers is alleviated. Facilities and equipment are as good as the people who manage and operate them. Teachers in dire conditions can never be expected to turn in good quality students and future leaders of our land,” he said.

As of this writing, 89 lawmakers have signed as co-authors to HB 2142 including the representatives of progressive party-list groups Bayan Muna, Anakpawis, Gabriela and Kabataan. Saranggani representative Manny Pacquiao is among the co-authors, as well as Rep. Lucy Torres-Gomez of Ormoc, Leyte and Rep. JV Ejercito of San Juan.