The Alliance of Concerned Teachers (ACT) held a picket in front of the national office of the Department of Education in Pasig City on the opening of its eight-week Kindergarten Summer Program (KSP) in all schools nationwide to protest against delays in the salary payments of kindergarten teachers.

France Castro, secretary-general of Act said their organization has been receiving reports from kindergarten teacher n Eastern Rizal, Davao City and other parts of the country saying that that they have not been paid their salaries since January, 2011.

“This situation is very alarming,” Castro said. She said the enthusiasm of many teachers has been affected because of the neglect they have been suffering. She said that the teachers have been having a most difficult time finding means to support themselves. “They have also been forced to borrow money from various sources because they don’t have enough funds to keep their families afloat,” she said.

As the DepEd begins its KSP program, Castro expressed doubt that it has the funds to pay the teachers who will handle the summer classes.

“The DepEd has to settle its debts to the teachers first,” she stressed.

In it’s Order No. 23, the DepEd said that the KSP will be held in all schools nationwide. Under the KSP, permanent Kindergarten teachers and those who were hired under the DepEd Subsidized Kindergarten Program during the school year will handle the Kindergarten Summer Classes (KSCs). The program is meant for prospective Grade 1 entrants without preschool experience as of June 2011. Participants are children at least five years and six months of age as of April 2011.

Recently, ACT Teachers Party-list Representative Antonio Tinio received complaints from Deped contractual kindergarten teachers in Davao City saying that they had not been given their monthly honoraria since January.

On April 5, Rep. Tinio referred the matter to the DepEd Region 11 Director Susan Estigoy, who said that she would discuss the issue with Davao City Schools Division Superintendent Helen Paguican. Afterwards, Tinio received the following text message from Director Estigoy: 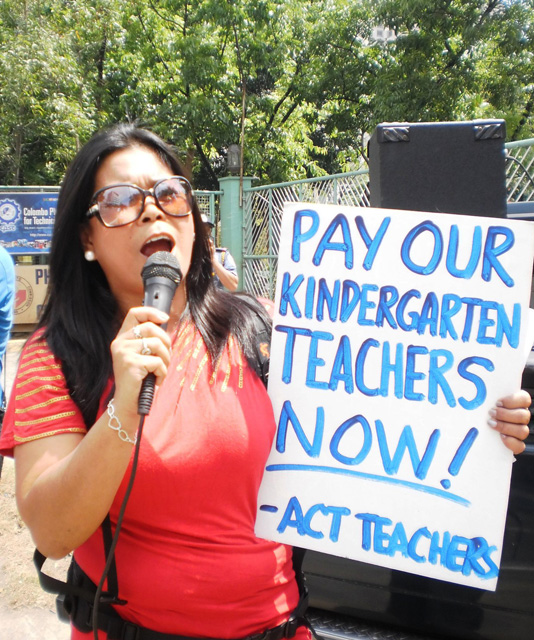 Castro explained that what Paguican’s message means is that the payment of the kindergarten teachers will be made available the following day, April 6.

“It’s sad how teachers are expected to work long hours and uphold the highest standards of teaching, but we are often subjected to these delays in remuneration. Teaching pre-school is a mentally and physically-demanding job and our teachers hardly complain abut their low salaries; but to impose delays in the release of these already small salaries is too much. It’s adding insult to injury,” she said.

“We condemn the months-long delay in the payment of honoraria of the DepEd’s contractual kindergarten teachers not just in Davao but throughout the country. We call for immediate payment of their back wages. We also call for the regularization of all contractual teachers who must be paid in accordance with the Salary Standardization Law,” she said.

It is not the first time that teachers have sought the help of Act over the late salary payments. Earlier in March , school teachers in Rizal said their salaries have been delayed for a week already.

After Act forwarded their complaint to the DepEd, the agency took action. DepEd Region IV-A Officer-in-Charge Dr. Lorna Dino said that the unpaid public school teachers would be receiving their salaries immediately. The official said that the delay was because they encountered problems with their computerized payroll system and it was unable to release balanced accounts. According to her, because of the system glitches, there was the possible problem that teachers might receive overpayments or underpayments, hence they have to make the necessary corrections.

Castro reiterated the Act’s position against the DepEd’s K+12 program, saying that there are other pressing issues that must be addressed before the agency embarks on its new education program.

“The implementation of the program will create a standing army of reserved teacher-laborers who will be more than willing to offer their services for lower salaries for the sake of getting a job and hoping for tenure later. We are against the DepEd’s plans to outsource the teaching employment through contractualization,” she said.

Earlier last year, Education Secretary Armin Luistro announced plans to implement President Aquino’s agenda of increasing the basic education cycle from the current 10 years to 12 years, a plan that was referred to as the “enhanced K+12 basic education program.”

“K” refers to “Kindergarten” while the number “12? refers to the sum of seven years of grade school and five years of high school. According to the DepEd official, reforms will be implemented gradually over a number of years and may go beyond the term of the current or even next administration.

Castro insisted that in the DepEd’s new program, teachers end up being “losers.”

“They are the ones who will be alienated and overburdened by the demands of the program. In the meantime, very young children beginning their formal schooling will be subjected to the same miserable conditions that their elder brothers and sisters have been forced to endure or continue to endure when they themselves entered pre-school. In other words, the program will only expand the already sorry situation in the primary schools to include the earlier years — exposure to overcrowded classrooms and exhausted teachers,” she said.

The activist educator said that the universal kindergarten program of the Aquino government is “an ill-conceived program that repeats perfectly the bureaucratic, anti-democratic and populist manner of implementing educational reforms” in the country.

“Those who will bear the brunt of the programs are reduced to mere conveyor belts who are expected to faithfully implement the program from the higher authorities,” she said.

Teachers are also among those calling on the Aquino government to implement wage and salary hikes. Act is a convener of the Wage Fight! Alliance which is campaigning for a P6,000 (US$140) salary increase for all government employees and a P125 (US$3) across-the-board wage hike for private sector workers. 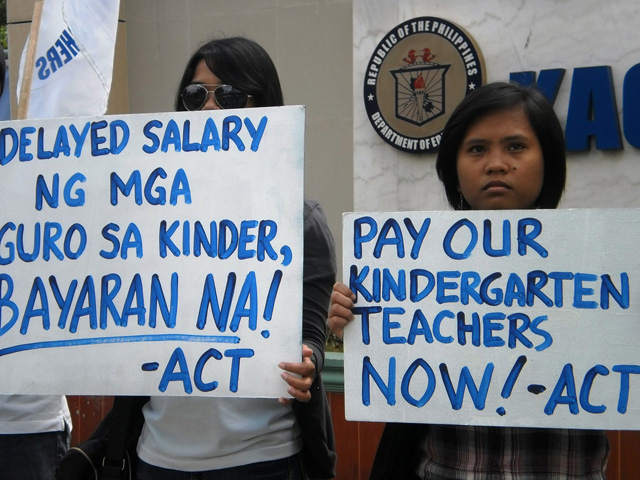 In the meantime, since July last year, Act Teachers’ Party-list has been pushing for the upgrade of the salaries of some 500,000 public and 200,000 private school teachers nationwide to Salary Grade 15 (P24,887 or US$579) in accordance with the guidelines set by the budget department.

Teachers’ current salary scale at Grade 11 amounts to only P15,649 (US$364), and amount which is below government-declared decent living standards.

ACT Teachers’ Party-list Tinio said that because of various deductions and high interest rates from loan sharks who take advantage of teachers desperate to secure loans from them, teachers’ net pay usually end up between P5,000 (US$116) to P6,000 (US$140) a month. Teachers, based on reports, are the lowest-paid professionals in the country. Almost 80 percent of the teachers teach in elementary and secondary public schools, as well as in state universities and colleges. The rest are employed in private schools.

In congress, the party-list group is also campaigning for various economic reforms to improve the welfare of teachers and educators in the country. It is pushing for the removal of the Claims and Loan Interdependency Program (CLIP) of the Government Social Insurance System (GSIS); the transparency in the governance of fund agencies such as the GSIS, the Social Security System , Philhealth, the various housing agencies and others.

“We are also calling for the enforcement of the Magna Carta for Public School Teachers. This has been , in force since 1966, but its various provisions are either violated or unenforced. There is a need to to strictly monitor its implementation. In the meantime, we also want the enactment of a Magna Carta for Private School Teachers,” said Tinio.

Tinio said that their group also wants the government to have budget reserves for teachers – “We want enough funds for the benefit of teachers and educational staff, and to regularize its disbursement.”

Finally, Tinio said that teachers are also still campaigning for the right to form unions. “This is a right teachers have not freely and fully exercised, particularly in the public sector. The legal framework for this right is supposedly provided by Executive Order 180 (1987), but the order imposes significant obstacles to the formation of public school teachers’ unions and the right to strike despite that this right is recognized by the Constitution,” he said.