‘Palparan should go to jail, not to Congress’

MANILA – “He is so shameless!”

This was the reaction of Concepcion Empeño, mother of missing activist Karen Empeño on Gen. Jovito Palparan Jr.’s recent announcement about his plan to run for a partylist seat in 2013.

Palparan, then commanding general of the 7th Infantry Division of the Philippine Army, is co-accused in the criminal complaint filed by the mothers of Karen Empeño and Sherlyn Cadapan, students of the University of the Philippines who have been missing since June 26, 2006.

Palparan told reporters after a hearing at the Department of Justice (DOJ), Sept. 23, that he intends to run again as nominee of the Bantay party list next elections. Palparan said, “In Congress, I can do a lot against terrorists.”

“He would not win again unless he would cheat. His reputation is tainted,” Mrs. Empeño told Bulatlat.com in a text message.

After his retirement from the military, Palparan ran as nominee of the anti-communist Bantay partylist in the 2007 congressional elections. The partylist ranked 32nd and, by virtue of a Supreme Court decision increasing the number of partylist seats, Palparan was proclaimed as Bantay representative in April 2009.

Edre Olalia, secretary general of the National Union of Peoples’ Lawyers (NUPL), said Palparan, by making such an announcement, was only “trying to smokescreen the strength of the evidence against him.” 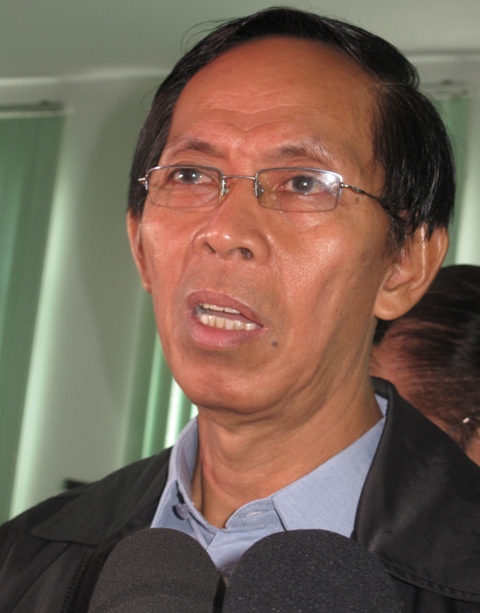 Olalia and five other NUPL members serve as lawyers of the mothers of the missing students.

“Given the strength of the evidence against Palparan and his cohorts, the context and the circumstances of the case and related incidents, we trust that there is sufficient ground to bring the respondents to trial and that the corresponding charges will be filed soon,” Olalia said.

Olalia noted that at the Sept. 23 clarificatory hearing, “Palparan was compelled to make damning admissions that further connect the dots on the circumstances surrounding the disappearance of Karen and Sherlyn.”

“He should not be daydreaming this early. It would be healthier for him if he deals with the reality that he is facing and will be facing a string of multiple charges in different fora and that sooner or later, justice will catch up on him,” Olalia said.

“Gen. Palparan’s incorrigible, remorseless and unmitigated demonization of defenseless civilians merits him a place behind bars and not a seat in Congress,” Olalia said.

“They [Palparan and other military officers] must pay for their crimes. It is very clear that they are the perpetrators. If justice would prevail, Palparan could no longer get off the hook,” Mrs. Empeño said.

Not belonging to the marginalized

Anakpawis Rep. Rafael Mariano said, “We don’t need another pseudo partylist group in Congress. Palparan must be punished for all the human rights violations and atrocities he orchestrated.”

As then representative of Bantay partylist, Palparan co-authored three bills, including the revival of the anti-subversion law. He did not author any resolution.

Kabataan Rep. Raymond Palatino said Palparan should go to jail, not to Congress. “He isn’t marginalized, his advocacy it to silence the marginalized.”

Olalia said Palparan continues to label activists, progressive groups and members of Congress as enemies of the state. “This fascist way of thinking and messianic delusions, is the mindset for extrajudicial killings and enforced disappearances as it makes no distinction between armed rebels and defenseless civilians and as it gives no regard to legal processes and to human rights,” he said.

At the sidelines of the Sept. 23 DOJ hearing, Palparan once again branded progressive partylist groups as fronts of the Communist Party of the Philippines (CPP), adding that the said groups have no place in Congress.

The NUPL revealed that one of the eyewitnesses, Wilfredo Ramos, was approached by soldiers three times to recant his testimony in exchange for economic rewards.

In his affidavit, Ramos recounted how soldiers abducted Karen and Sherlyn and farmer Manuel Merino from their house in Hagonoy, Bulacan more than five years ago. Ramos also recognized Staff Sergeant Edgardo Osorio of the 24th Intelligence Service Unit of the Philippine Army, a security aide of Palparan, as one of the abductors.

“This is clearly a case of subtle harassment by the military in a desperate attempt to weaken the merits of the case and to relieve of any criminal responsibility all those who are part of the conspiracy,” Olalia said.