“It’s really ridiculous that the people are already paying for the cost of constructing roads and on top of that paying for taxes on their payments.” – former Rep. Renato Diaz, consultant when the VAT law was crafted 17 years ago

See also: VAT on toll fees, a precedent for all public services under PPPs

MANILA – Does silence mean yes? Is it wise to assume that what is not expressly excluded is perhaps legally included? Did the Supreme Court over-extend itself when it approved the Value–Added Tax (VAT) on toll fees, even if it was not expressly stated in law?

These and other questions were probed in a meeting of the House of Representatives’ Committee on Ways and Means Tuesday, which decided to approve and consolidate the pending bills here seeking to explicitly exclude from the scope of Value-Added Tax the fees on toll roads. The Senate already has a matching bill. “We’re just awaiting the bill of the House of Representatives,” said Sen. Ralph Recto.

Former Rep. Renato Diaz, consultant when the VAT law was crafted 17 years ago, told the committee on ways and means that the law does not provide for the imposition of VAT on toll fees. “It’s not true the SC decision mandates the BIR to implement VAT on toll fees. That is misleading.” Diaz explained that it is “the decision of the executive if they would press ahead with imposing the VAT on toll fees or not.”

The Supreme Court decision, which is being used by the Bureau of Internal Revenue (BIR) as basis for levying a VAT on toll fees this October, has prompted moves in the two chambers of Congress to craft a “simple” law explicitly excluding toll fees from VAT coverage. 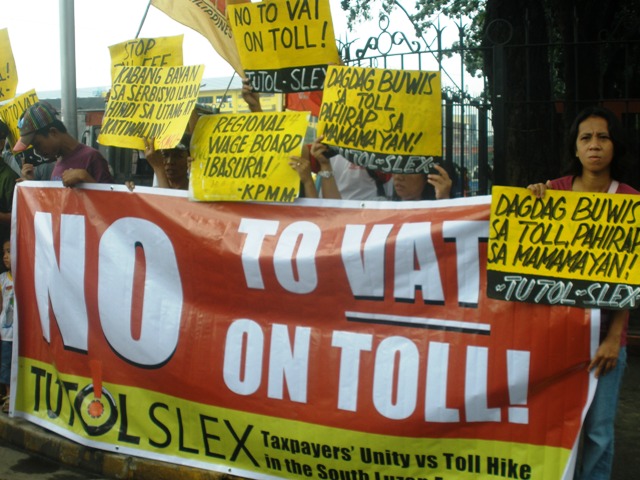 Members of TutolSlex urged the public to press Congress and Aquino to exempt toll fees from VAT. (Photo by Marya Salamat / bulatlat.com)

A few days after the VAT began to be imposed on toll fees, motorists, commuters and peoples’ groups are still protesting the decision. They have been calling on the public to put pressure on the country’s legislators and the president to stop the “regressive tax” and “double taxation.”

The Taxpayers’ Unity vs Toll Hikes (Tutol Slex), for example, continues to conduct protest actions in the toll booths and in Congress as they urged lawmakers to pass House Bill 5303, authored by Bayan Muna Rep. Teddy Casiño. The bill seeks to explicitly exempt from VAT coverage the fees on toll roads.

On Tuesday, too, members of TutolSlex urged the Supreme Court to issue a temporary restraining order on collecting VAT on toll fees.

A commuters’ group, the National Council for Commuters’ Protection, and a transport group (Piston), also expressed in Congress their strong opposition to VAT on toll fees, as well as to VAT in general and excessive toll fee increases in particular.

To respond to this “deafening cry from the constituencies,” members of the House of Representatives’ committee on ways and means chaired by Rep. Hermilando Mandanas approved and decided to consolidate as soon as possible, without needing a technical working group, the similar bills filed by Bayan Muna Rep. Teddy Casiño and Rep. Homer Mercado.

Asked to estimate a likely timetable for Congress to enact the bill, Bayan Muna Rep. Teddy Casino told Bulatlat.com that the committee can finish its report and transmit the consolidated bill for plenary discussion in just a day, but its passage will depend on how the entire Congress and the Aquino government itself would heed the continued people’s protests. Casiño urged President Benigno “Noynoy” Aquino to certify the bill as urgent.

The Supreme Court decision approving the VAT on toll fees had “thrown the ball in Congress,” said Rep. Homer Mercado, author of a pending bill in Congress “similar to the bill of Bayan Muna Rep. Teddy Casino,” as Mercado himself said. As such, Mercado explained that that is what the Congress is now doing, making necessary amendments to the (VAT) law.

Mercado aired the same justification raised by Bayan Muna in opposing VAT on toll fees. He said the highways being subjected to VAT now are actually public facilities – despite being under BOT or build-operate-transfer agreements. Indeed, at the end of a certain period, 25 years in the case of the roads constructed under BOT, these would be transferred to the government. 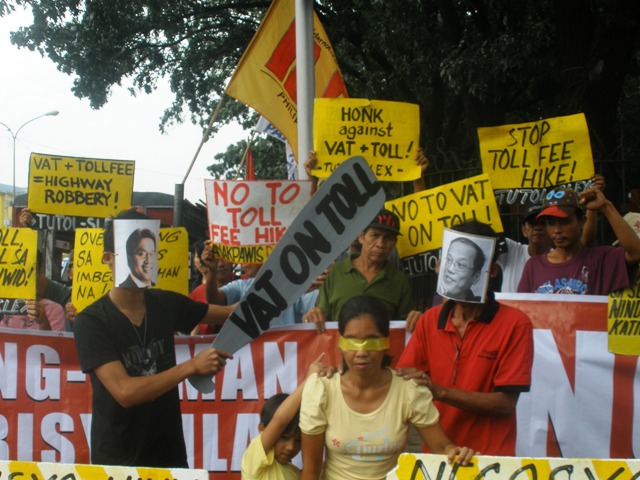 Protesters remind govt that roads are public services, not business for profit and tax.(Photo by Marya Salamat / bulatlat.com)

Under the BOT, the government passes the “burden” of building highways to the private sector, which the government, in turn, authorizes to collect toll fees from road users to enable it to recover the cost (and earn profits) from building and operating toll roads. Toll fees are already taxes, lawmakers opposed to VAT on toll have said. The VAT on toll fees, they said, will therefore amount to “a tax on tax.”

Former Rep. Diaz reminded lawmakers that VAT only seeks to tax “ordinary sales of businesses,” and toll operations are “not ordinary sales but public services.” He pointed to the TRB’s function of deciding the toll fees as “best exhibit that there is no ordinary sale, and that the seller has no discretion.”

Diaz warned against the impact of imposing a VAT on toll fees. “Here is the government streamlining operations by outsourcing, then they will impose the VAT on it?”

The idea sparked fears that projects under PPPs (public-private partnerships) may soon not just collect higher fees as well, but also be subjected to VAT.

Taxing the poor while giving incentives to the rich

Government taxmen estimate that the VAT on toll fees will yield P2.2-billion ($50m) annually. TRB executive director Manuel Imperial said they “rounded down” the amount of toll fee increases instead of rounding it up as the toll operators had requested. The rounding down, Imperial said, meant “losses for the government of P123-million ($2.8m).”

But according to former Rep. Renato Diaz, “It’s really ridiculous that the people are already paying for the cost of constructing roads and on top of that paying for taxes on these payments.”

He asked Congress to place “safety nets” with regard to VAT, recalling that when they crafted the VAT law, they never intended to cover the toll fees.

George San Mateo, secretary-general of Piston, said it is not true that the VAT on toll fees will have little effect on the people, as the representatives of BIR claimed. As an example, he said, Piston members using the South Luzon Expressways (SLEX) have complained that at the rate the new toll fees are digging into their pockets every time they use the toll roads (ten times in a working day), they would be paying P1,000 ($23) in toll VAT in a month.

That, he said, is on top of the 300-percent increase in toll fees. Added together, it would mean a P5,000 ($114) loss of income per month of the already low-earning drivers, San Mateo said.

Representatives of the BIR also belittled the added cost the VAT imposition will put on commodities that will pass through the toll roads. But the president of a national commuters’ association appealed to the Aquino government’s conscience.

“When two of you are working in Metro Manila, it is very difficult to budget for the increase,” Elvira Medina told the legislators. She said many working people, some of them government employees, had bought low-cost housing units in Metro Manila suburbs. She said they may turn into “weekend parents” if the rising cost of transportation forced them to “go back to renting” in Metro Manila.

Why don’t you tax the big foreign investors coming into the country’s economic enclaves, Sammy Malunes, spokesman of Tutol Slex, asked the BIR, the Department of Finance and the lawmakers. He decried the numerous tax incentives being given to the rich, while the poor are not spared from new taxes. He also urged the BIR to go after the “tax delinquents” instead, and to the “big fish” tax evaders.