MANILA — In Tuesday’s hearing in Congress by the Committee on Constitutional Amendments, few groups expressed support for amending the economic provisions of the constitution. Of the nearly 20 groups that arrived to take part in the discussion, most expressed opposition to cha-cha. Even the few cha-cha supporters also expressed disapproval of some of the eight proposed amendments to the economic provisions.

The group Philconsa (Philippine Constitutional Association), which nixed some of the proposed amendments even as it expressed approval or openness to some, is in favor of amending the Constitution but “through a Constitutional Convention.”

The House committee is conducting hearings on House Concurrent Resolution 10 which calls for Congress to constitute itself into a constituent assembly.

Philconsa said with foreign investments coming in amid all that liberalization, “how can we ensure that they will not siphon off all the gains and leave the Philippines holding the bag?”
Even though the group said during the House public hearing that they have “no problem with the liberalization of the economy,” they noted that “when the Parity Rights or equal rights between the US and the Philippines was in force (from 1946 to July 1974), the much ballyhooed economic development did not happen.”

These fears and more were aired by most leaders of progressive organizations who panned the proposed cha cha at the House committee hearing.

Representing 65 provincial chapters in 15 regional groupings with two million members, the Kilusang Magbubukid ng Pilipinas (KMP) secretary-general Danilo Ramos told lawmakers that they are “emphatically opposed” to the proposals to amend the constitution.

Ramos stressed that they are opposed to the Congress-proposed cha cha and 100-percent foreign ownership of Philippine land.

“Of the eight points of the Resolution 10, five are about farmers and agriculture,” noted Ramos. He reminded Congress that three in four Filipinos depend on agriculture for their livelihood.
“If you removed the 60-40 restriction to foreign ownership, it would result in this country’s resources being more than a hundred percent owned by foreigners,” warned Ramos. He based this scenario on data gathered by KMP in its last national congress, that despite the present 60-40 restriction in foreigners owning land, for example, as much as 2million hectares of prime agricultural lands are already under the control of foreign corporate plantations such as Dole and Del Monte in Mindanao.

If you add the lands covered by mining permits under the liberalization pushed by the Philippine Mining Act, you would get a sense of the extent of Philippine lands already under foreign control, said Ramos. The “usual victims” of this frenzied grab for land and its natural resources, Ramos said, are the farmers, farm-workers and indigenous peoples.

Thus, for peasants, said Ramos, this current move to further open up the country’s economy and natural resources to exploration and exploitation of foreign investors will “only worsen” the plight of its “usual victims.”

Cha-cha is not the solution to the problem of economic underdevelopment, Ramos said, but “free land distribution so that the 75-percent of the Philippine population will have control over the land.” He urged the Congress to craft instead measures for “genuine agrarian reform and rural development,” coupled with “nationalist industrialization” and “not this export-oriented, foreign dominated” setup of industries.

Zen Soriano, leader of peasant women’s organization, Amihan, also told Congress that they are “strongly opposed” to House Concurrent Resolution 10 and to adding another 25 years to the right of foreigners to lease Philippine lands, explore and exploit its natural resources.

“The possibility that we could ever own the lands we are tilling will dwindle all the more if foreigners are given the right to all the more own and control our mountains, waters, forests,” Soriano told the lawmakers in Filipino at this Tuesday’s hearing.”

When that happens, “it would mean our death,” Soriano said, as she recounted that, already, the country may be threatened with food insecurity due to prevalent land use conversion for industrial and tourism purposes, and for the shift to the production of biofuels in prime agricultural lands.

If passed, the current proposed cha cha measures “will exert a big impact on the already destitute women,” said Soriano. She asked Congress to “stop all moves to further open up the country to foreign investments.” She urged Congress to “strengthen food production through land reform with appropriate support services,” and to “prioritize local investments in exploration and exploitation of the country’s natural resources.

Soriano also asked the lawmakers to craft an enabling law to “ensure sustainable land and resource utilization, for the next generation.” She said all these proposals of the peasant women are in conflict with the current cha cha proposals.

The organization of fisherfolks Pamalakaya, represented by its chairman Fernando Hicap, also expressed their opposition to cha cha in Congress. Hicap said as it is, there are already many varied ways in which foreign investments are coming into the country displacing the locals in the process. 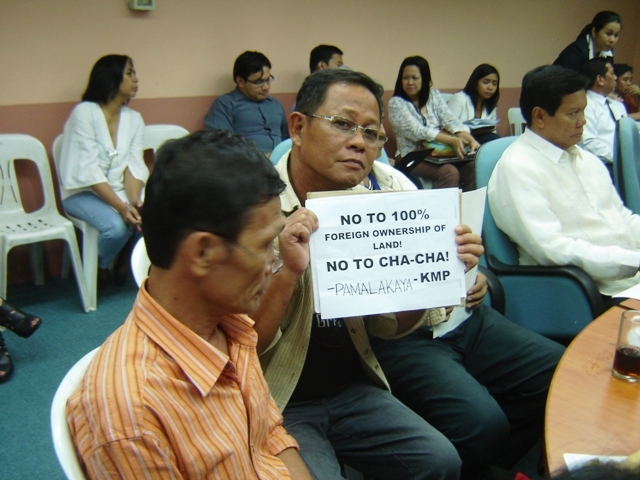 Fernando Hicap of Pamalakaya shows his organization’s stand at the House hearing on cha cha.(Photo by Marya Salamat / bulatlat.com)

He cited as examples the “corporate agriculture, fish cages and mariculture, such as a Korean firm’s plan to plant seaweed in Bohol;” the conversion projects seeking to turn agricultural lands into eco-tourism sites, such as the planned five artificial islands in Bohol; the planned reclamation in Cebu and in Manila Bay, which include the 175-hectare remaining mangrove area in Las Piñas and Parañaque; the planned 5,000-hectare casino in Manila Bay and the North Bay Blvd. Business Project; the magnetite mining that is getting more widespread; the planned exploration and drilling for oil and natural gas as President Aquino unveiled 14 areas of the Philippines up for grabs for exploration permits.

As such, if Congress pressed ahead with giving foreigners the right to 100-percent ownership of lands in the country, the incidences of hunger among fisherfolks and the people will only get worse, said Hicap. He likens the cha cha proposals to “renewed colonization of the Philippines.”

“Contrary to what the expensive paintings of national artist Fernando Amorsolo are depicting, the Philippine peasantry is not leading idyllic lives in the countryside,” Rodel Misa, chairman of UMA or union of farmworkers, told the lawmakers. Misa decried the continued usurpation of lands by big landlords that he blames for the downgrade of some one million peasants into agricultural workers in the past decade.

“The cha cha proposals in Congress is a nightmare for the people in the countryside,” said Misa, saying it would be “10 times more disastrous to our lives than the past typhoons that ravaged the country.”

Only foreign corporations will benefit from liberalizing the economy, Misa continued. But aside from pushing the farmers into deeper poverty, he warned that the entry of these foreign investments into the country’s agriculture will “engender widespread plunder and disasters.”

To address underdevelopment, like his fellow peasant leaders, Misa urged the lawmakers to abandon the cha cha proposals and craft laws instead calling for land reform and nationalist industrialization.

The proposed House Concurrent Resolution 10 seeking to liberalize the entry of foreign investments in tertiary education sits on a doubtful premise for Taguiwalo. She said the cha cha proposal “is framed on treating education not as a service but as a commodity. “Hence, its extending opportunities for students to be better trained as per World Trade Organization requirements.”

Taguiwalo also pointed to the cha cha proposal’s doubtful treatment of education and courses as “business and potential source for profit, available only to those who can afford it.” She ascribed to this the reason why “advanced countries are the most interested in their liberalized entry here.”

If Congress would go ahead liberalizing the country’s tertiary education to allow for the entry of foreign investments, and the bigger influence of market-determined courses, Taguiwalo warned, “it would exert the same impact as what the liberalization of the economy did to the country’s manufacturing.”

But liberalizing education will not just engender job losses. According to Taguiwalo, it will also “accelerate the attack vs the Filipino soul and psyche.” She explained that you cannot rely on foreign investors in education to teach service to the nation more than teaching the efficiency demanded by their cravings for profits.

Instead of losing “the already limited protection of nationalism,” Taguiwalo called on Congress to protect it and strengthen state support for education. Do not sell these to the highest bidder, she asked the members of House Committee on Constitutional Amendments. 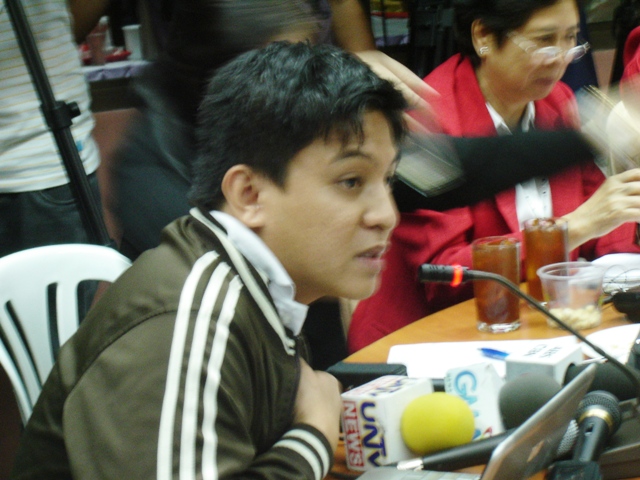 National Union of Students of the Philippines chairman Einstein Recedis agreed with Taguiwalo. He also asked lawmakers to not rely on foreigners to teach Filipinos their history and love of country.” He also reminded lawmakers that if you just focus on which courses are “popular,” then education is no longer about developing the country but responding to the investors’ need for labor.