MANILA – She has been waiting for years but justice still remains elusive. Erlinda Cadapan, mother of the missing UP student Sherlyn Cadapan who has been missing since June 26, 2006, would never tire in her quest for justice. On International Women Human Rights Defenders Day, mothers, including Cadapan and women human rights defenders groups Tanggol Bayi and Kasimbayan Women’s Collective trooped to the Department of Justice on Nov. 29, Thursday.

“It has been five years and a half since my daughter went missing, up to now I am still in the streets demanding to the government to surface my daughter and to give justice to all victims of human rights violations,” said Cadapan.
The groups demanded an immediate favorable resolution of the Cadapan-Empeño criminal case against retired Maj. Gen. Jovito Palparan and the imprisonment of former president Gloria Macapagal Arroyo. 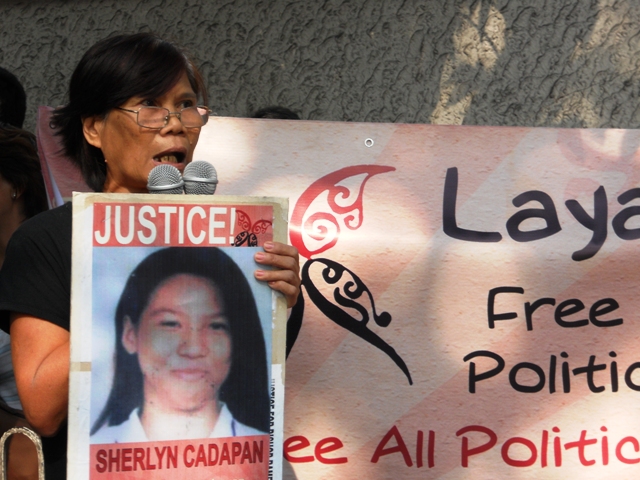 “I have been looking for my daughter since 2006, I have cried so many times looking for her but to no avail,” said Cadapan. She also sent a plea to Justice Secretary Leila De Lima to release the resolution on the criminal case against Palparan. A criminal case was filed by Cadapan and Conception Empeño against Palparan and other military officers involved in the abduction, torture, rape, arbitrary detention and other crimes against Sherlyn and Karen Empeño and farmer Manuel Merino. It was submitted for resolution during the third week of October 2011 but no decision has been rendered by the Department of Justice up to now.

“We were supposed to go back to our hometown in Visayas, but we can’t leave Luzon because of the case,” Cadapan said in a separate interview with Bulatlat.com.

“We sometimes run out of money but I can always find a way to go to mobilizations like this and to be able to attend hearings,” Cadapan said. She said she can survive with a little help from her friends. She also hopes that the DOJ issues its resolution soon. “I want to live a normal life again. I hope that the DOJ issues a favorable resolution so that the pain of looking for my daughter would somehow be eased.”

Like Cadapan, Evan Hernandez, mother of Benjalin Hernandez, a victim of extrajudicial killing, and Ching Montajes, mother of Maricon Montajes who is now being detained at the Batangas Provincial Jail joined the protest action to demand for justice.
“Arroyo should experience what my daughter went through in the hands of her captors. She should be put in jail!” Cadapan said.

UN resolution not implemented under Aquino

Justice is within reach for the families of women human rights defenders Benjaline Hernandez and Eden Marcellana when the United Nations Human Rights Committee (UNHRC) found the Philippine government guilty of violating their human rights. But President Benigno S. Aquino III – who said that violators of human rights will be held accountable – is not acting on the UN resolution. 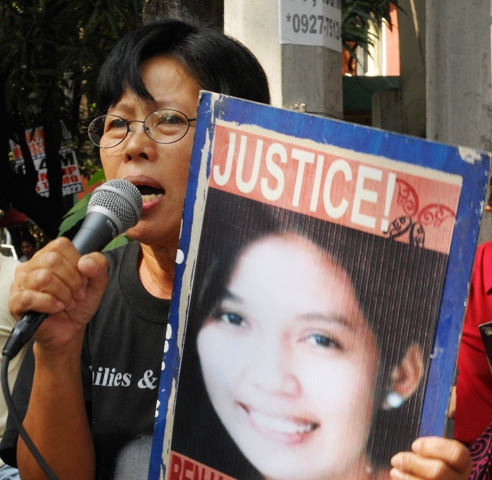 It was almost ten years since Benjaline Hernandez was killed, the UNHRC has released its decision on the case but the Aquino administration is not implementing it. (Photo by Anne Marxze D. Umil / bulatlat.com)

Benjaline or Beng to her friends and comrades, with three other companions were gunned down in Arakan Valley, North Cotabato, on April 5, 2002, by members of the Citizens Armed Force Geographical Unit (Cafgu). Oplan Bantay Laya had just started then. “Beng died under the Arroyo administration. It was the birthday present (Beng’s murder) of the Armed Forces of the Philippines (AFP) to Arroyo,” said Hernandez. It was Arroyo’s birthday when Beng and her companion were killed.

Beng was the deputy secretary general of Karapatan-Southern Mindanao Region and vice president for Mindanao of the College Editors Guild of the Philippines (CEGP). Beng was in the area to follow up the documentation of a massacre that happened the previous year also in Arakan Valley.

Beng’s family has exhausted all legal remedies in the country to hold the perpetrators accountable. But with the slow pace and inefficient justice system in the country, Beng’s case, was submitted to the UNHRC in March 2006 through Karapatan. Ironically, after the decision on Beng’s case was released, the local court in Kidapawan acquitted a suspect in Beng’s killing Master Sergeant Antonio Torilla of the 7th Airborne Battalion of the 12th Special Forces Company of the Philippine Army. The UNHRC issued its decision in August 2010. 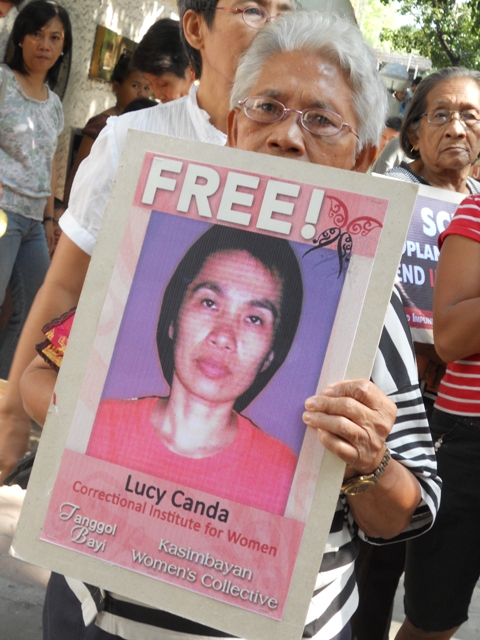 Beng’s case is the second case where the UNHRC found the Philippine government guilty of violating human rights. The first is the case of Eden Marcellana and Eddie Gumanoy. On Oct. 30, 2008, the UNHRC released its 12-page decision on Marcellana and Gumanoy case.

Marcellana was the secretary general of Karapatan-Southern Tagalog and Gumanoy was a former secretary general of peasant group Kasama-TK. The gruesome murder of Marcellana and Gumanoy happened on April 21, 2003 in Maibon, Naujan, Oriental Mindoro. Marcella was part of an 11-member quick reaction team that was investigating cases of abduction and killings in Gloria and Pinagmalayan towns in the province.

Marcellana and Gumanoy’s body were found the next morning, April 22, 2003, in Bansud, Oriental Mindoro. According to reports, Marcellana’s head was smashed beyond recognition and two adjacent holes the size of an icepick were found on her nape. She was hogtied and beaten. Witnesses point to the “Bonnet Gang,” a paramilitary group linked with the Philippine Army’s 204th Infantry Battalion of which then Maj. Gen. Jovito Palparan Jr. was the commanding officer.

It’ll be almost a decade now since the killing of Beng and Marcellana, the UNHRC has decided on their respective cases but the perpetrators are still at large. What’s even worse is that killings, disappearance and illegal detention of activists continue under the Aquino administration.

“He should have implemented the UN resolution. But he is not doing that. Relatives of victims of extrajudicial killings, disappearance and other human rights abuses will not stop looking for justice and soon enough they will be held accountable and will be put to jail,” said Hernandez.

The world is opposite now, said Cadapan, Arroyo, the woman behind human rights violations in the country is crying that her right to life is being violated. 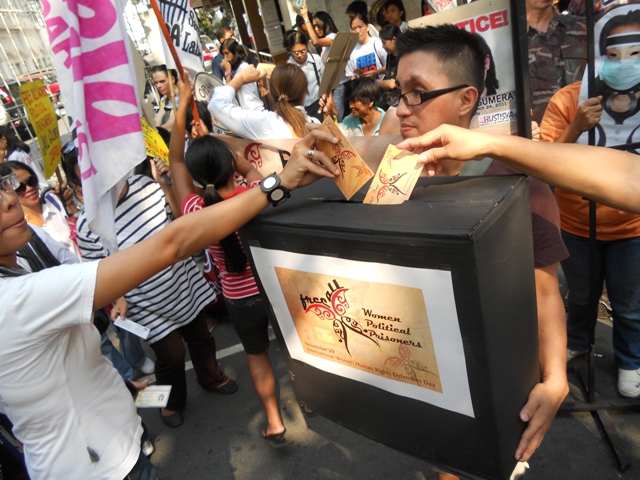 “Arroyo and her favorite general Palparan, who she hailed with accolades and promoted for his role in violating the rights of women and human rights defenders during her nine-year term, should be reunited – in jail. There should be no special treatment for either Arroyo or Palparan, both should be detained in regular detention facilities, not in comfortable hotel-like suites,” said Cristina Palabay, convenor of Tanggol Bayi.

“I was illegally detained for six years. I was held incommunicado for 12 days and was even tortured despite my old age. And that didn’t only happen to me, but also to other political prisoners in other parts of the country. The military has no respect for human signs. And now Arroyo wants respect? She should experience what I have gone through,” Angie Ipong said. She was released from Misamis Occidental Provincial Jail in Oroquieta City last Feb. 17. 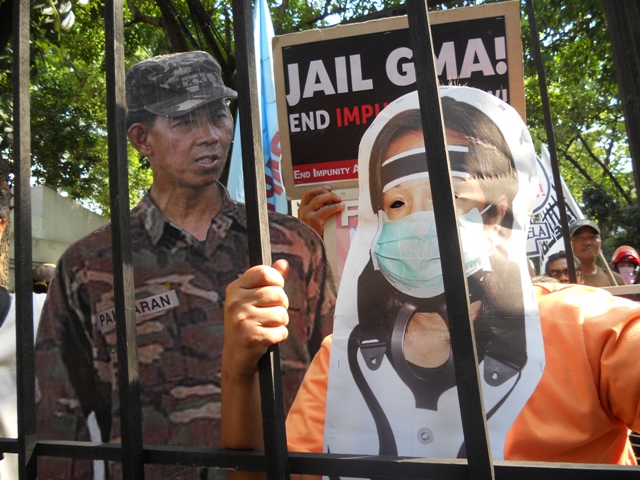 Groups want no special treatment to former President Gloria Macapaga Arroyo. “She should be the one who holds the cold bars of detention,” said Cristina Palabay, convenor of Tanggol Bayi. (Photo by Anne Marxze D. Umil / bulatlat.com)

It was international women’s day, March 8, 2005, when Ipong was illegally arrested by combined elements of the Criminal Investigation and Detection Group (CIDG) and Southern Command of the Armed Forces of the Philippines in Lumbayao village, Aloran, Misamis Occidental. She was slapped with trumped-up charges, including arson, double frustrated murder and frustrated murder. These charges were eventually dismissed due to lack of evidence.

“These women are human rights defenders who work for the protection, promotion and defense of women’s rights. They are being persecuted and charged with trumped up cases, yet they remain in jail. It is they who should be released, while Arroyo should be tried and kept in jail for illegal arrest, torture, detention and all the rights violations she has committed against these women,” Kasimbayan Women’s Collective spokeswoman Norma Dollaga said.

At the end of the program at the DOJ, postcards with a message to release all political prisoners, which were addressed to Aquino through the Justice Sec. Leila De Lima, were sent to the latter’s office. “We hope that the President would act on our demand for unconditional release of political prisoners,” said Palabay.