YEARENDER: 2011, a precarious life for the urban poor

Residents, according to Sevilla, are holding on to the promise of the local government that a medium rise residential building would be given to them. Those who could not wait, on the other hand, can move to a relocation site in the province of Bulacan.

“They said it would be finished in a year. But they did not mention when they would start the project,” Sevilla said.

On April 28, another demolition took place this time in Laperal Compound in Quezon City. About 18 individuals were reportedly hurt in the incident.

Residents were asked to leave the area after a fire razed their community. The Makati City local government then declared it as a danger zone, forbidding residents to go back to their homes.

On August 5, 2011, another community in Sitio Manggahan-kawayanan, Barangay Marcelo Green in Para?aque City were demolished. Karapatan-NCR, in its report, said five minors namely Genaro Portugal, Jansen Espina, Jay jay Espina, Stephen Dee Pontillas, at Danny Barroga were forcibly arrested by police and members of Special Weapons and Tactics unit of the police. They were accused of carrying “sharp objects” during the demolition. They were fortunately released after three days for failing to prove the allegations against them.

A few days later, on August 31, another community in Old Balara, Quezon City was demolished. Residents claimed that they were not informed about the court order and that no relocation site was offered, a right guaranteed under the law.

On the month of October alone, three more communities were demolished. Some 42 families were displaced from Sitio Fatima Kawayanan, another subvillage in Barangay Marcelo on October 15. Urban poor leaders were arrested for resisting the demolition. The families were padlocked from their homes. They were consequently forced to live on a nearby narrow alley.

Two days later, an urban poor community in Barangay Welfareville in Mandalayong City was demolished. About 46 families were affected. Then, on October 29, three residents of Barangay Moonwalk in Paranaque City were arrested during the demolition of their homes. Karapatan-NCR said in its report that police fired at the protesting residents, causing chaos during the demolition. Three residents, namely Erickson Buenaventura, Ernesto Elorde and Jerry Paolo remain behind bars to this day for charges of direct assault and alarm and scandal that were filed against them.

On November 28, about 500 families in Sitio Looban in Novaliches successfully barricaded their community from threats of demolition. In Dypac Compound in Tondo, Manila, however, the homes of about 300 families were demolished last December 12, a few days before Christmas. 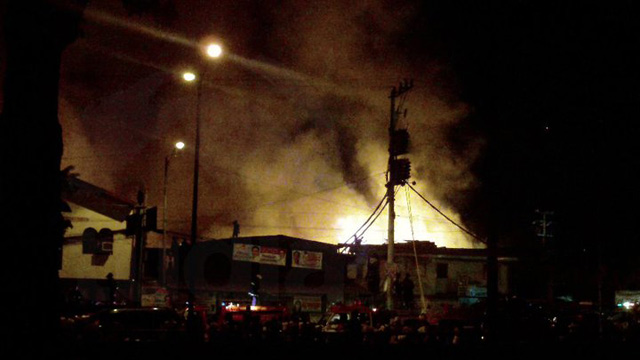 Late 2010, President Aquino implemented a moratorium on demolition until the then newly installed government would be able to formulate a comprehensive plan that would address the concerns of urban poor dwellers. The said moratorium was put into place in the aftermath of the violent demolition that took place in Sitio San Roque in Quezon City last September 23, 2010.

But Badion told Bulatlat.com that demolition of urban poor communities still took place in “other forms.” He added that these were termed as “clearing operations” or a fire would “accidentally” raze a communities with existing demolition threats.

For 2011, about 851 cases were of fire were recorded by the Bureau of Fire and Protection. According to Badion, most are urban poor communities under threat of demolition. Instead of receiving donations and immediate relief from the government, victims receive offers to resettle in relocation areas, which, said Badion, makes the occurrence of the fire suspect.

As in the case of the urban poor community in Kadiwa, Navotas, a fire first took place on January 29. The following day, the residents were offered a relocation site. A letter from the Office of the Building Official, Jerry Magpayo, read that residents are advised to “voluntarily leave” their community due to “structural hazards.”

Magpayo added that the houses that were burned were no longer suitable for the residents. ““The City Government will not be held liable for any deaths or damages to properties as a result of your failure to heed our call,” the letter read.

Through their dialogues, urban poor groups soon discovered that a tenement housing building would be constructed in their community, where, Irene Tena, secretary general of Nagkakaisang Samahan sa Kadiwa (Nasaka) said, the local government would earn more.

A few days later, on February 7, a fire razed an urban poor community along BIR road in Quezon City. Residents then interviewed by Bulatlat.com, expressed their suspicions about how the fire started, citing the local government’s continuous threats to demolish their homes.

Residents also complained about the much-delayed arrival of the firefighters when the nearest fire station is less than a kilometer away. Badion, in a previous Bulatlat.com interview, said that intentional burning of urban poor communities is always a possibility when the government is pushing for a project “in the name of development.”

“We do not want to put the blame on anyone but it is hard to keep it off our mind especially because it is common knowledge that this area is part of the QCCBD,” Julieta Ibareta, a resident, said

The QCCBD or the Quezon City Central Business District is a 256-hectare project which would supposedly put Quezon City at the forefront of global investments and business interests. The Ayala Land Inc., a big real estate company, has already signed an agreement with the National Housing Authority to develop the 29.1 hectares of land for the project, with an estimated cost of about $500 million. The project would be done at the expense of driving away several urban poor communities and several government offices as well.