MANILA – Members of various peoples’ organizations surprised the police guarding the roads leading to the US embassy in Manila Saturday when they marched to protest the US government’s plans to increase troop deployment in the Philippines.The protesters also remembered that on this day 113 years ago, the US government launched war against Filipinos. The protesters pressed the Aquino and the Obama governments to return to the Philippines the famed Balangiga bells which the US soldiers carted away to the US a century before.

Groups critical of US imperialism have always been barred from marching even to the vicinity of the US Embassy at Roxas Boulevard in Manila. But on Saturday they managed to get around the police and hold a program right in front of the gates of the US Embassy, to explain to their members and to passersby why the increased US troops mean deeper trouble.

The US already has 600 troops stationed in the Philippines for the last 10 years, not counting the periodic joint military exercises. But it is projected to increase in 2012 as the US government has announced plans to redeploy more of its troops into the Asia-Pacific region. In the face of protests in other Asian countries and here, the US embassy officials “assured” Filipinos that it is not reestablishing its military bases. But leaders of progressive groups are not biting, as they pointed to the US track record at basing its troops in the Philippines, first under a Military Bases Agreement, then under the Visiting Forces Agreement.

The protesters also denounced Philippine president Benigno “Noynoy” Aquino for behaving like “a puppet of the US imperialist,” as shown in his immediate readiness to welcome more US troops into Philippine soil and waters. Reminding Aquino of his promise during the election campaign and on his second month as president, that he would order a review of the Visiting Forces Agreement, the rallyists asked why Aquino has not done anything yet to even start the review. It has been two years since Aquino announced the call for review. 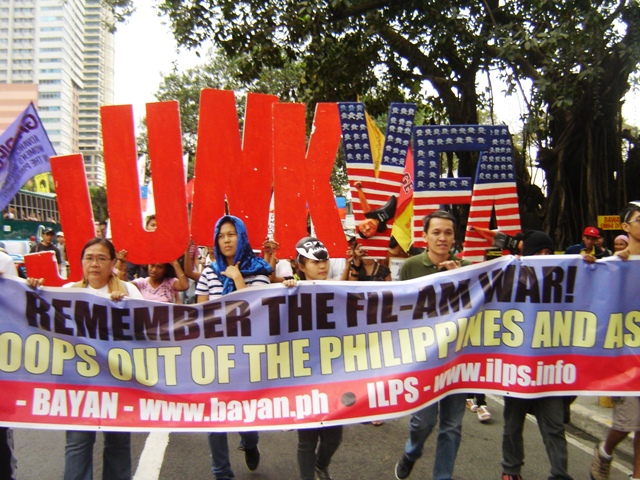 Progressive groups mark the 113th year of Fil-Am war with protests vs increased US military presence in the region.(Photo by Marya Salamat / bulatlat.com)

Aquino’s foot-dragging at holding a VFA review contrasts starkly with his quick rolling out of the red carpet for the arriving US troops. In preparation for more of them coming, “many indigenous peoples and Moros are already being driven away now from their lands,” said Kakay Tolentino, spokeswoman of the Katribu Partylist, during the rally in front of the US Embassy.

The other day, the combined forces of Philippine and US troops launched an air strike targeting Moro communities though officially targeting “terrorists,” Tolentino said. Last December, she added, Aetas reported to the Katribu Partylist that 5,000 US troops had landed and conducted military exercises in Fort Magsaysay and former Subic naval base.

For driving out the Filipinos from their lands and livelihood, the US troops should not have been allowed to visit and stay here, Tolentino concluded. She urged the public to oppose the Aquino government’s decision to welcome increased US troops.

No.1 threat to women and children

Joms Salvador, deputy secretary-general of the women’s group Gabriela, declared during the protest at the US embassy in Manila that the US troops are the “number 1 violator of Filipino human rights and dignity.”

“During the time the US troops (clearly) had bases here, thousands of cases of rights violations committed by US soldiers had been reported and filed. In fact, when the US bases were shut down, there were 400 pending cases of rape and sexual molestation of women and children,” said Salvador. But not one of these cases was resolved, she said. 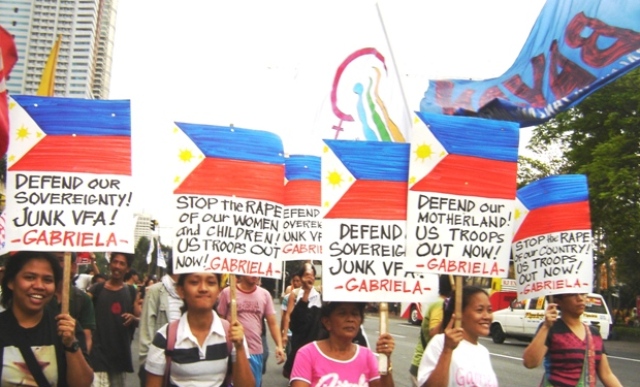 Women blame the ‘cloak of immunity’ of “visiting” US troops for their string of unresolved crimes here.(Photo by Marya Salamat / bulatlat.com)

Salvador blamed the “immunity cloak” virtually granted by the Philippine government to ‘visiting’ US troops for the thousands of recurring incidences of rape and sexual molestation committed by US troops while here.

“Since we booted out the US military bases and their troops in 1992, we have never turned around and said that rapists, plunderers and terrorists have become welcome,” Salvador said in Filipino.

No relief or development

The US troops’ basing in the Philippines is more for the economic interest of the US, said Joselito Ustarez, vice-president of Kilusang Mayo Uno (KMU). He belied the common notion that the US troops came with a desire to “develop” the Philippines, by pointing to the sorry underdeveloped state of the Philippine economy 113 years later since the US troops first colonized it. 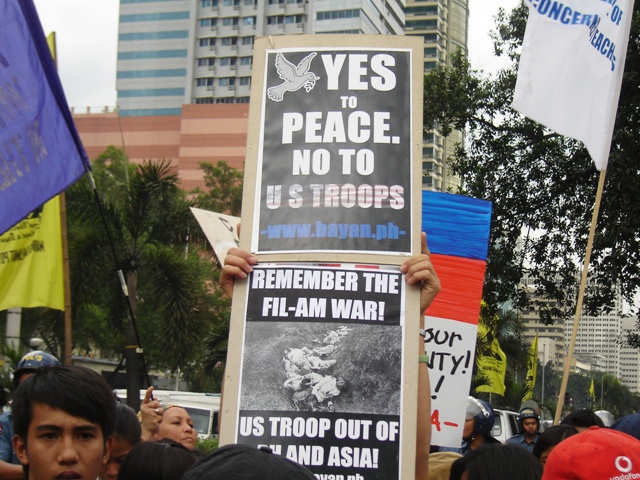 Protesters demand peace and pullout of US troops. (Photo by Marya Salamat / bulatlat.com)

One hundred and 13 years later the pattern of US plunder and exploitation of Filipino natural and human resources continues; so does the depressed condition of the Filipino workers and the Filipino people in general, Ustarez said.

The “US imperialist’s presence in the Philippines didn’t give us development and relief. On the contrary, they just implement policies that continue making us poor,” said Ustarez. He cited the neoliberal policies of deregulation, privatization and liberalization as prime and updated examples.

For these reasons, the labor group KMU also called on freedom-loving and patriotic Filipinos to join the resistance to growing US military presence in the Philippines and in the region.

Renato Reyes, secretary-general of Bagong Alyansang Makabayan (Bayan – New Patriotic Alliance), promised that they would continue holding public forum and protest actions in the coming weeks as more American top officials are slated to fly here for talks with Philippine government officials about their drive to increase deployment of US troops here.