“The whole world knows of the failure of the Aquino government to bring to justice human rights violators like Gen. Jovito Palparan and of the horrendous, less than one percent conviction rate of perpetrators of political killings on top of the snail-paced justice system.” – Fr. Rex RB. Reyes, NCCP

Sidebar: The Philippines and the Universal Periodic Review

In its 22-page report, the Philippine government boasted of the decrease in the number of victims of extrajudicial killings and enforced disappearances. Citing the report of Task Force Usig from 2008 to 2011, the Philippine government claims that there were only 27 activists and media practitioners killed during the period. The Task Force Usig of the Philippine National Police (PNP) was created during the Arroyo administration purportedly to investigate cases of extrajudicial killings of activists and journalists.

In a press conference, May 21, Elaine Pearson, deputy Asia director of Human Rights Watch said while it is true that there has been a reduction in the number of cases, she noted that the decrease occurred before the Aquino administration took over and was a “result of both domestic and international pressure to stop the killings.” “Killings and enforced disappearances have not stopped completely,” Pearson said. “Four years later, we see exactly the same situation.” 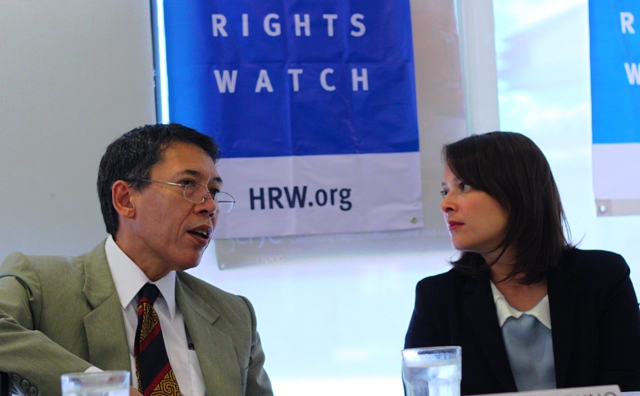 Pearson said that while the human rights trainings are welcome, men in the military continue to “commit abuses not because they do not know it is wrong but because they know they can get away with it.” “The trainings will only be effective if accompanied by strong prosecutions and the people are held to account,” Pearson said. Based on Human Rights Watch monitoring, there have been only four cases of extrajudicial killings that have been prosecuted during the last four years.

“…We really want to see the President sending a message from the top that these cases [of extrajudicial killings are prioritized by the government and that anyone who is obstructing these investigations or police investigators failing in their duty to investigate will also be held to account. We simply haven’t seen that kind of strong statement coming from the top.” Pearson said.

While the New York-based group acknowledged some progress on human rights, particularly the enactment of an Anti-Torture Law, the ratification of the Rome Statute for the International Criminal Court and access to justice of the poor through the Justice on Wheels program, Pearson said, “there is no basis for disregarding the many human rights violations that continue to this day.”

“The whole world knows of the failure of the Aquino government to bring to justice human rights violators like Gen. Jovito Palparan and of the horrendous, less than one percent conviction rate of perpetrators of political killings on top of the snail-paced justice system,” Fr. Rex RB. Reyes, co-head of the Philippine UPR Watch delegation and general secretary of the National Council of Churches in the Philippines (NCCP), said in a press conference, May 18. 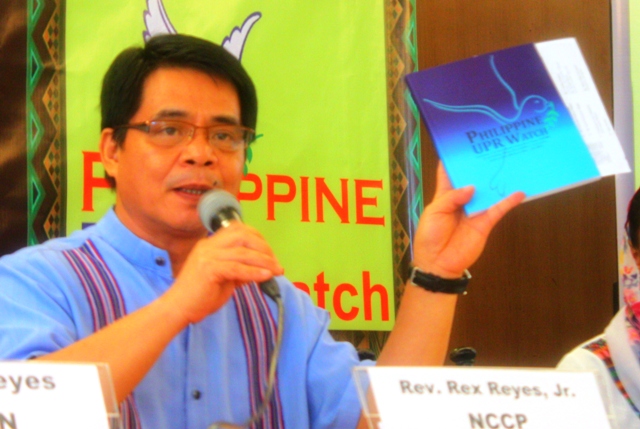 Rev. Rex Reyes Jr., general secretary of the National Council of Churches in the Philippines, presents the highlights of their alternative reports submitted to the United Nations Human Rights Counsil .(Photo by Ronalyn V. Olea / bulatlat.com)

Palparan is a retired Philippine Army general charged with kidnapping and serious illegal detention in relation to the enforced disappearance of University of the Philippines (UP) students Karen Empeño and Sherlyn Cadapan. In December, a local court in Bulacan issued a warrant of arrest against him and three others. He remains fugitive.

Marie Hilao-Enriquez, co-head of the delegation and Karapatan chairwoman, chided the military for saying that its troops have not committed rights abuses in the past four months. “Such declarations are farthest from the truth as, on the ground, the horrid human rights situation remains, with such impunity, as there have been 76 extrajudicial killings and hundreds of rights violations perpetrated by the AFP, its paramilitary units and the Philippine National Police (PNP) under the Aquino presidency,” Enriquez said.

In its submission to the Council, Karapatan cited in particular the killings of Italian missionary Fr. Fausto Tentorio , Aklan Municipal Councilor and Bayan Muna coordinator Fernando Baldomero, botanist Dr. Leonard Co , among others. The group said all of these cases remain pending either at the prosecutorial or court levels, while state security forces and masterminds accountable for these crimes have yet to be put behind bars and convicted.

Enriquez said the Aquino administration did not initiate the filing of cases against known perpetrators of human rights abuses, including Arroyo. The relatives of the victims of extrajudicial killings and enforced disappearances and torture victims initiated the filing of civil and criminal suits against Arroyo and various military officers, Karapatan said.

For its part, Human Rights Watch said it has seen progress in a few cases such as the filing of charges against Palparan and former Palawan governor Joel Reyes in relation to the murder of environmentalist and broadcaster Gerry Ortega. Pearson said the filing of charges is just the first part of the equation and the fact is that the two remain as fugitives.

Speaking during the press conference organized by Human Rights Watch, Jose Manuel Diokno, president of the Free Legal Assistance Group (Flag) said that the structural problems in the judiciary contribute to impunity.

Moreover, even as the Philippine Senate already ratified the Optional Protocol to the Convention against Torture (OPCAT) and the implementing rules and regulations to the Anti-Torture Law of 2009 has been issued, torture remains unabated. In fact, Karapatan documented 212 cases of torture from 2008 to June 2011.

Human Rights Watch also noted that no one has been convicted yet of the crime of torture.

The NCCP, in its separate submission to the Council, noted that the Philippine government has not ratified the International Convention on the Protection of All Persons from Enforced Disappearances. A bill seeking to criminalize enforced disappearances is pending in Congress.

In a submission to the Council, the National Union of Peoples’ Lawyers (NUPL) raised the continued practice of “criminalization of political offenses.”

“Contrary to the well-established doctrine on political offenses, hundreds of cases of individuals who are supposed to be or are suspected to be performing acts in pursuit of their political beliefs are charged with common crimes like murder, kidnapping, illegal possession of firearms or explosives etc. instead of rebellion,” the NUPL said, citing in particular the arrest and torture of artist and journalist Ericson Acosta.

Based on Karapatan’s records, of the 360 political prisoners as of August 2011, at least 303 or 84.17 percent have been charged with common crimes.

Diokno also mentioned the filing of John Doe cases against activists or the practice of arbitrary inclusion of activists in fabricated criminal charges.

The Philippine UPR Watch attributed the continuing human rights violations to the counterinsurgency program of the Aquino administration, the Oplan Bayanihan.

Asked to comment on Oplan Bayanihan, Pearson said the group has yet to conduct a study on Aquino’s counterinsurgency program. She, however, raised the issue of the military’s use of schools for military purposes and the vilification campaign against activists. “To say that an anti-mining activist is a communist is a death sentence,” Pearson said

The report also enumerated its anti-poverty programs including the conditional cash transfer (CCT).

“The Philippine report is full of motherhood statements,” Renato Reyes Jr., secretary general of Bagong Alyansang Makabayan (Bayan) said during the press conference. Reyes noted that while the report cited the executive orders, policies and programs of the Aquino administration, no results were mentioned how these programs concretely improved the conditions of the Filipino people.

In its submission to the Council, the Ibon Foundation, an independent think tank, revealed statistics debunking the Philippine government’s claim of development.

According to Ibon Foundation, some 65 million or 70 percent of Filipinos lived off P104 ($2.40) or much less per day in 2009. The poorest families have the least access to basic needs. The 2008 Annual Poverty Indicators Survey (APIS) found that among the poorest 30 percent of families, 28.7 percent do not have access to safe drinking water, 36.2 percent have no electricity and 24 percent do not have access to sanitary toilets.

Ibon revealed that 11.2 million Filipinos are either jobless or employed but still looking for additional work in 2010 – or 4.4 million unemployed and 6.8 million underemployed Filipinos, equivalent to some 28 percent of the labor force.

“Economic rights form an integral part of human rights…The Philippine state will also have to be answerable to rising unemployment, poverty and hunger,” Reyes said.

The 14-member Philippine UPR Watch delegation will go to Geneva, Switzerland to present what they call as the real human rights situation in the Philippines.