LOPEZ, Quezon – Since last year, Bernardo (not his real name), 52, a resident of San Francisco-B village in Lopez, has been visited by soldiers three times in his house. He was also asked to go to the detachment of the Army’s 76th Infantry Battalion in Silang village four times.

A former leader of Anakpawis, Bernardo said soldiers were telling him to admit he is a member of the New People’s Army (NPA), armed wing of the Communist Party of the Philippines (CPP). “I told them I am not. That’s the truth,” Bernardo said in Filipino in an interview with Bulatlat.com.

Sometime last year, Bernardo went to the Silang detachment upon the military’s order. Soldiers took his photograph. He was made to sign a document stating that soldiers did not coerce him. He would later learn that his name was included in the list of “rebel returnees.”

This is the face of “winning the peace” under the Aquino administration’s counterinsurgency program Oplan Bayanihan in South Quezon villages. Bernardo’s experience was not unique. His neighbors were also summoned by soldiers and listed as former NPA rebels.

“The soldiers told me they were just investigating. They said I should admit that I am an NPA because my alleged comrades, my neighbors, already confessed,” Bernardo said.

After listing him as a rebel returnee, Bernardo said, the soldiers formed an organization called Acacia GSM which stands for ganap na samahang masa (full blown mass organization). Almost all of his neighbors were “recruited” to this organization because the military is being “supported” by local village officials.

The soldiers who went to his house several times warned him against providing food for NPA guerrillas. “They said, ‘You’d be killed if you accept NPAs to your house.’ They said I should provide them information on the activities of their enemy,” Bernardo said.“I told them I am just a farmer and it is not my job to provide them such information.”

“I told them they are fortunate because they receive their salaries from our taxes unlike us who have to work hard to survive,” Bernardo said. “Upon hearing this, they told me I had really been trained by the NPAs.” 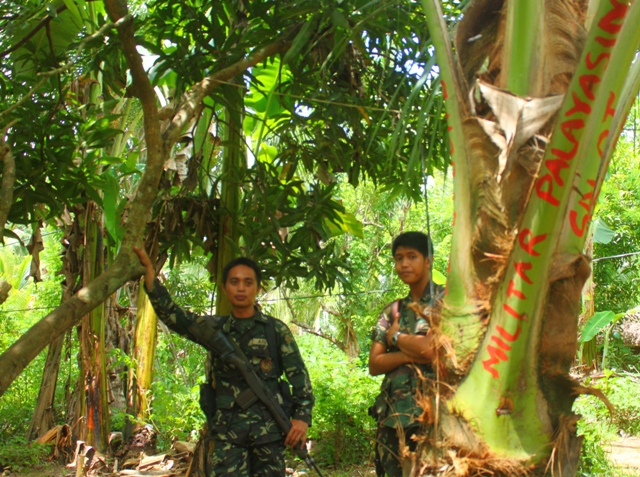 Soldiers position themselves near the venue of the mercy mission at San Francisco-B village in Lopez, Quezon.(Photo by Ronalyn V. Olea / bulatlat.com)

Military presence in Bondoc Peninsula has been permanent since Aquino assumed office. Eight battalions of the Armed Forces of the Philippines, paramilitary and police are concentrated in the 22 towns of South Quezon. Instead of going after the NPA fighters, however, the soldiers violated the rights of civilians, according to the Save Bondoc Peninsula Movement, a group of human rights advocates, Church-based groups and people’s organizations that recently conducted a peace caravan and mercy mission in these areas.

The Children’s Rehabilitation Center (CRC), one of the conveners of the Save Bondoc Peninsula Movement and the group that spearheaded the psychosocial services for the children revealed the use of children for military purposes (see related story). Soldiers would often ask children if their parents are NPA members or if they are hiding firearms in their houses.

“This is what they call civilianizing the counterinsurgency. The military wants to turn all civilians into their spies,” Marie Hilao-Enriquez, Karapatan chairwoman, said during the public forum of the Save Bondoc Peninsula Movement, July 2.

Karapatan also noted the endangerment of civilians in San Andres and Lopez towns.
“Public places are being occupied by soldiers, exposing civilians to danger,” Dj Acierto, head of the mission’s documentation team and a member of Karapatan, said.

Soldiers of the 74th IBPA have been occupying the village hall in Talisay, San Andres since January, according to the report of the mission’s documentation team. In Pagsangahan, Nasalan and Maticol 2 villages in San Francisco town, the military also used the village halls as detachment. In many of these cases, soldiers keep close watch of the village officials. 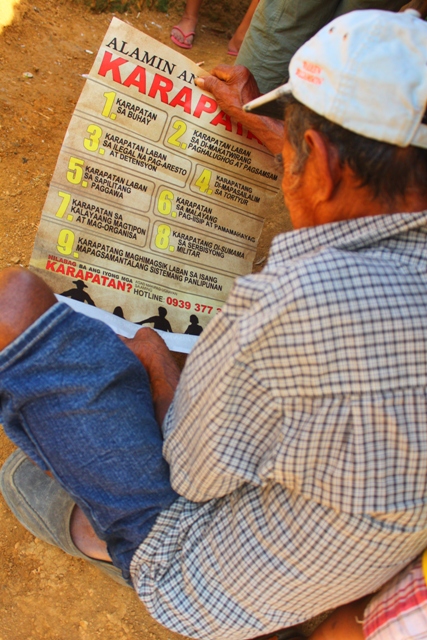 A resident reads a poster from Save Bondoc Peninsula Movement. (Photo by Ronalyn V. Olea / bulatlat.com)

Acierto revealed that in some villages in South Quezon, soldiers have usurped the role of village officials. “In some instances, soldiers would be the ones facilitating meetings in village halls, discussing barangay ordinances,” she said.
In these assemblies, soldiers would present a list of alleged NPA members. Those who failed to attend the meetings get visited by soldiers. The soldiers also showed anti-communist films during such meetings.

One of the victims narrated that when she filed a complaint with the village captain, the local official sent her an invitation to face the military the next day.

Acierto said there was a general sense of fear among the civilian population. While the activities of the fact-finding and mercy mission were going on, armed soldiers roamed around the premises. (see related story). At Talisay village, San Andres, suspected soldiers were seen taking pictures of the participants. At San Francisco-B village in Lopez, eight fully armed soldiers positioned themselves a few meters away from the venue of the activities.

When confronted by leaders of the Save Bondoc Peninsula Movement, the soldiers of the 85th IBPA said they were there to protect the civilians. The leaders said their mere presence invites danger but the soldiers stayed for two hours.

The international humanitarian law (IHL) , provides protection for civilians. “IHL provides that civilians under the power of enemy forces must be treated humanely in all circumstances, without any adverse distinction,” the International Committee of the Red Cross states.

During the mission, residents expressed fear of reprisal from the military if they were to narrate their experiences.

Acierto said Oplan Bayanihan’s two-faced character is clearly shown in Bondoc Peninsula. “Benign on one side, but terroristic on the other,” she said.
In some of the villages visited by the Save Bondoc Peninsula, the Armed Forces of the Philippines conducted their own medical missions, dance contests and the like.

At San Francisco-B village, the 85th IBPA conducted its own medical mission. Soldiers spread the lie that their medical mission and the one organized by the Save Bondoc Peninsula Movement were “joint activities.”

A day after the second leg of the mercy mission in Lopez, the military issued a statement, published in a local daily, stating that the AFP, along with local government units and police, provided additional medicines and other resources for the Save Bondoc Peninsula Movement.

“They took away the resources originally intended for our activities and they had the gall to tell lies,” Orly Marcellana, Save Bondoc Peninsula Movement spokesman, said.

Even as the AFP professes to “respect human rights,” the Save Bondoc Peninsula Movement documented cases that violated one’s rights to be secure in one’s person and home, the right to liberty, privacy, and the right against torture, of those who are organized, the report of the documentation team stated.

“One of Oplan Bayanihan’s objective is to isolate and weaken its ‘enemies,’ but ultimately, it is the people’s organizations that are defending the peasant’s right to the land and asserting their right against military abuses that end up getting harassed,” Acierto said.

Marcellana said the military presence in Bondoc Peninsula aims to protect the big landlords in South Quezon such as Eduardo “Danding” Cojuangco. “The people’s just struggle for land and livelihood is met with state violence,” Marcellana said.