“Any step taken by the capitalist to take away the past victories of Philsteel workers’ continuing struggle is a blow on the entire labor movement of Southern Tagalog.”

MANILA – Another demonstration of employers’ hostility toward workers’ unions and their struggle for improved wages is once again bared, this time against workers of Philsteel Corporation in Laguna. Philsteel is engaged in the manufacture of prefabricated steel, galvanized iron and other metal products. Since late last week they had been compelled to launch a strike as their efforts to negotiate for a new collective bargaining agreement (CBA) are reportedly met with outright management refusal, coercion and lately, layoff of all union leaders and members.

Of the nearly 80 workforce, Philsteel terminated in waves, since middle of last month, first the union leaders then its board and some active members. As the union put up a strike to protest the evident union-busting act and urge for their long-time co-workers’ reinstatement, the company reportedly terminated all the remaining workers who are union members. All 55 unionists have now been fired.

The workers, under the Philsteel Workers’ Union (PWU-OLALIA-KMU), erected their picket line in front of the company office in Pulo, Cabuyao at noon time on August 21. A talk between the union leadership and Philsteel management is scheduled in the region’s labor department today.

The more than thirty-year old workers’ union in Philsteel Corporation is one of the few remaining survivors of what appears like a continuing crackdown against Philippine trade unions. Since the 80s, when the number of unions reportedly peaked in the Philippines, unions have found it harder and harder to survive as they struggle against layoffs coupled with contractualization, and harassments, as well as outright violence should they gear for a strike. 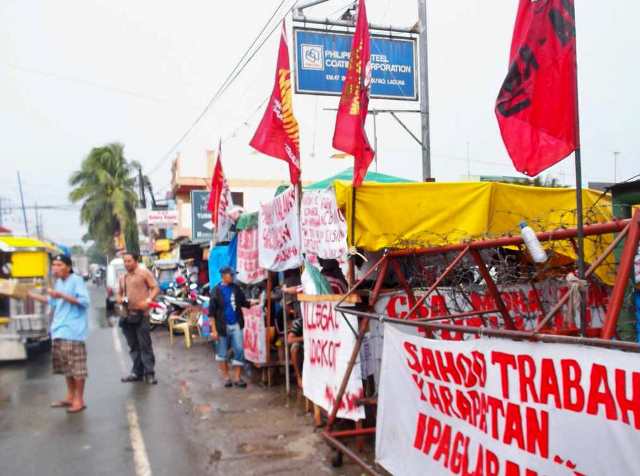 Philsteel workers’ picket in front of the factory (Photo courtesy of Pamantik-KMU / bulatlat.com)

Organizing into unions, holding a strike and other mass actions, are all recognized as workers’ rights and enshrined in the Philippine Constitution. But over the years, labor rights advocates and labor groups have criticized how the employers’ and government’s actions have combined to constrict and deny these rights. Some of the most brutal examples include the Hacienda Luisita massacre of striking farmworkers, the garrison-like façade and series of brutal dispersals of workers picket at Nestle Corporation in Cabuyao, Laguna, and just last year, the violent treatment including the police bodily hauling away from the airport the striking Philippine Air Lines workers in Parañaque, Manila.

In a statement, Pamantik-KMU (Pagkakaisa ng Manggagawa sa Timog Katagalugan – Kilusang Mayo Uno, or Solidarity of Workers in Southern Tagalog – May First Movement), described as “a systematic act crueler than any calamity” the Philippine Steel’s “ruthless and simultaneous ravaging” of its long time workers livelihood and union.

The labor union in Philsteel is one of those with an exceptional history of continuing struggle since the ‘80s, Pamantik-KMU said. It added that at this point, the capitalist, led by bourgeois comprador Abeto Uy, is once again challenging the unity and strength of the workers.

Since the strike in 1985 of Philsteel workers, they have enjoyed victories in wages, jobs, and rights as a result of their unified stance and resolve to uphold the rights of the working class., Pamantik said.

This year, Philsteel workers are on their seventh strike “to defend victories of the previous decades.”

A struggle against wage freeze and CBA moratorium

As per law, the workers’ union and Philsteel management should have been negotiating for a new three-year collective bargaining agreement (CBA 2012-2015) since January this year. But according to Pamantik, it was only in April that the negotiations actually began, but the management immediately moved to stop this as it unveiled its plan to have a “CBA moratorium” to the union. This meant no wage increase and no benefits would be shared to the workers for the next three years.

When the union protested and asked the government’s National Conciliation and Mediation Board (NCMB-Region IVA) to intervene, Philsteel reportedly just insisted on a CBA moratorium. Left with no recourse, the union filed on June 29 a “notice of strike,” citing “CBA deadlock” and “unfair labor practice” (CBA moratorium) as basis. But instead of addressing the issue, Philsteel reportedly responded by filing a “lockout” and started threatening the workers it would close down the factory.

For the past two years, Philsteel has reportedly already begun to implement a CBA moratorium, in the process violating its previous signed agreement with the Philsteel workes’ union, and a decision favoring the said CBA issued by the Office of the Secretary of the Department of Labor and Employment in September 23 last year.

Pamantik charged that Philsteel management has made the situation worse after the series of dismissals of workers. Philsteel reportedly beefed up its formation of security guards and goons, which the employers deployed inside and outside the factory. The workers said these armed men spied on them and generally treated them as if they were prisoners on maximum security.

Pamantik said that Philsteel is using the influence of some local politicians as it builds up some “garrison-like barricades in front of the company.” Pamantik said this “is an evident form of repression, and the capitalist’s declaration of war against the workers.”

Unfortunately, the workers reportedly found no support nor solution in this matter from the labor department.

The Department of Labor and Employment and the Office of the labor secretary were “not able to do anything about the Philsteel management’s actions, and it did not provide the workers any clear solution during the many negotiations that took place watched over by this labor agency.”

According to Pamantik, the primary goal of Philsteel management in forcing its workers to swallow a CBA moratorium and bust their union if they would not is a threat to all working people in the Philippines, and not just to the veteran union of Philsteel workers. “Any step taken by the capitalist to take away the past victories of Philsteel workers’ continuing struggle is a blow on the entire labor movement of Southern Tagalog.”

Pamantik urged the public to support and “unite for the rights of the workers and the people to wages, jobs, and rights.” They urge other workers, students and the general public to “bring together our efforts in the picket line, communities, and all other battlefields for our struggle to win and promote our legitimate rights.”