“Forty years after martial law, it is anomalous and anachronistic to have political prisoners languishing in different jails all over the country.” – National Union of People’s Lawyers

MANILA – Hundreds of lawyers and law students held a simultaneous fasting, Sept. 14 to press anew for the release of 385 political prisoners in the country.

Led by the National Union of Peoples’ Lawyers (NUPL), 300 lawyers and 200 law students and paralegals in 18 regional and provincial chapters fasted and visited political prisoners in various jails.

They denied themselves food for the whole day, which, they said, is “a small sacrifice and symbolic gesture to demonstrate against the government’s denial of freedom for political prisoners.”

“The NUPL particularly notes that the President – who has all the powers at his disposal — cannot be the son of a father who was the foremost political detainee who was persecuted and had endured hardships in jail and of a mother who had unconditionally released all political prisoners, and yet keep hundreds of political dissenters and innocent victims of state repression up to this time,” Edre Olalia, NUPL secretary general, said. “It does not only not make sense, it is unacceptable, insensitive and callous. It is a continuing shame.”

The president’s father, Benigno Aquino Jr. , popularly known as Ninoy, was detained during martial law. His mother, the late president Corazon Aquino, released political prisoners through a general amnesty upon assuming the presidency.

“Forty years after martial law, it is anomalous and anachronistic to have political prisoners languishing in different jails all over the country. It is as if we are living in a time warp and have only gone from one form of state repression or intolerance to another,” he said.

A number of political prisoners are NUPL’s direct clients and many are elderly, sick and women.

Olalia said that as lawyers, they have been taught that political rights are guaranteed by the Philippine Constitution, that the Hernandez political doctrine prohibits the criminalization of political offense, that there is the writ of amparo for the protection of human rights victims, among others. 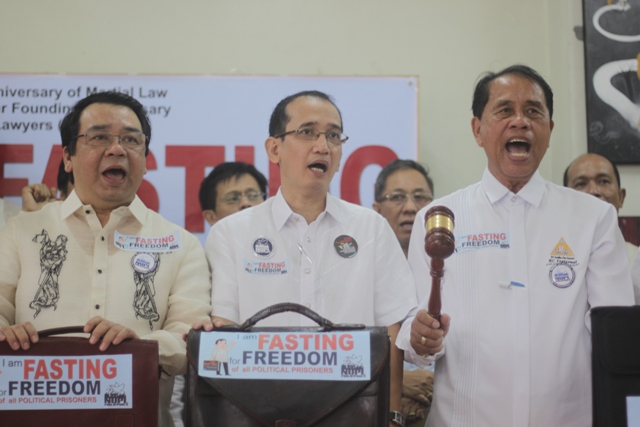 Lawyers call for the unconditional release of all political prisoners in the country during a press conference, Sept. 14. (Photo by Ronalyn V. Olea/ bulatlat.com) 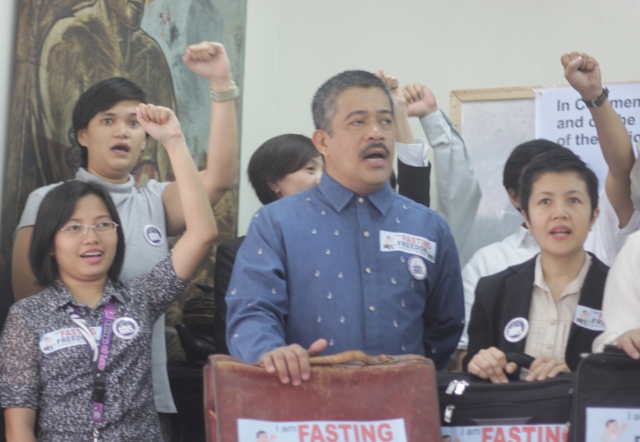 Lawyers call for the unconditional release of all political prisoners in the country during a press conference, Sept. 14. (Photo by Ronalyn V. Olea/ bulatlat.com)

“After 40 years of martial law, 85 percent of political prisoners are charged with common crimes, not rebellion,” Olalia said.

“After 40 years of martial law, the military openly defies court orders, such as in the case of Tirso Alcantara,” Olalia said.

Alcantara, a consultant of the National Democratic Front of the Philippines (NDFP) is being kept under military custody despite the order of the Gumaca court for his transfer to a civilian detention facility. Another NDFP consultant, Ramon Patriarca, has been transferred to Camp Lapu Lapu, the headquarters of the Central Command of the Armed Forces of the Philippines.

“Aquino is being so technical. Why? Would he agree if his father would be called a criminal? Ninoy, like today’s political prisoners, was charged with common crimes such as murder, illegal possession of firearms,” Colmenares said during the press conference.

“We just could not understand why despite the human rights covenants [signed by the Philippine government], government imprisons people on the basis of their political beliefs,” Colmenares said.

The Integrated Bar of the Philippines (IBP) joined the call for the release of all political prisoners, especially the elderly, the sickly and the women.

Nasser Marohomsalic, IBP national secretary, read the statement during the press conference. “Compassion is not only our basis for the release of political prisoners on humanitarian grounds,” the IBP said.

“Oppressive social structures and inequities may have pushed dissenters and reformists to take to the road of resistance. Many of them belong to the poor, weak and underprivileged communities who need the protection of the state under the principle of parens patriae.”

With the statement of the IBP, Colmenares said, practically all lawyers in the Philippines are calling for the release of all political prisoners.

“All progressive lawyers groups throughout the world are also calling on the Philippine government to release of political prisoners,” Colmenares said.

The Italian Association of Democratic Lawyers, the Jakarta Legal Aid Institute and the Japanese Lawyers International Solidarity Association (Jalisa) also expressed their support to the call for the release of all political prisoners in the Philippines.

King cited cases of extrajudicial killings, torture, the existence of paramilitary groups, among others.

“We call upon President Aquino to begin a process of justice,” King said. “He should state clearly that indefinite detention, torture, extrajudicial executions and disappearance are illegal and will not be tolerated.”

Olalia said that depending on the reaction or non-reaction of Malacañang, lawyers are ready to up the ante of protest.

Colmenares said they will not tire until no political prisoner is left in jail.