“He turned to me for a moment, then turned his attention back to the person in front of him – I think it was a person wearing or covered in white, and I saw Sgt. Dennis Jabatan stab at the person twice.”

MANILA – Labor leader Rolando Olalia and companion Leonor Alay-ay died in the hands of soldiers with the Philippine defense department’s special operations group (SOG) twenty-six years ago. This much was revealed in the continuation of testimony in court this Tuesday November 20 of state witness, T/Sgt. Medardo Dumlao Baretto. The witness did not give details about the torture of the two, but he detailed that Olalia and Alay-ay were at the hands of state soldiers from the time they were abducted after 7p.m. of Nov 12 to the time they were left dead in the grassy slopes of Antipolo, Rizal in the wee hours of the morning of Nov 13 in 1986.

But before Baretto started on this part of his testimony, Lorna Kapunan, lead counsel of Col. Eduardo Kapunan Jr., one of the 13 accused in the double murder case, had first asked the court how much longer Baretto’s testimony would be listened to. Saying the witness has already executed a 15-page affidavit, and what’s being said in court was “almost verbatim” from that affidavit (seven pages after two hearings, so far), she asked the court to just mark the said affidavit and proceed with the trial including the hearing for the petitions for bail of the three accused currently in government custody. 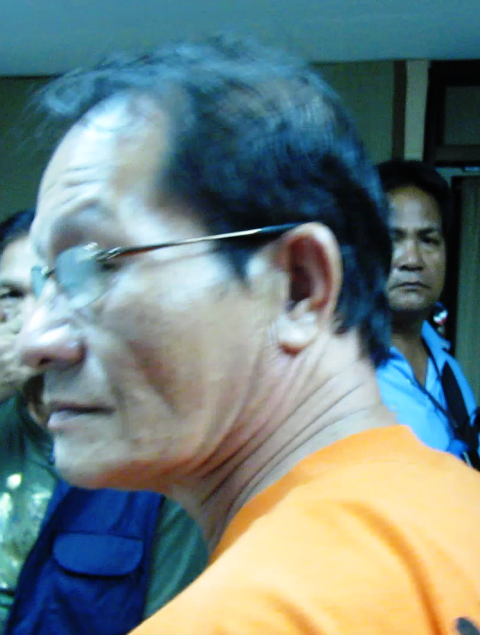 As of this hearing, there are three out of the 13 accused in government custody. The rest remain at large.

Last Oct 24, former Sgt. Dennis V. Jabatan was reportedly arrested by the police. He is now detained at Rizal provincial jail with co-accused and former Sgt. Desiderio Perez who surrendered last August. Jabatan was arraigned recently. Like Kapunan and Perez, he had also filed a petition for bail. Retired Col. Kapunan who surrendered last month, is currently detained at the National Bureau of Investigation detention facility, due to his request to be at a secure detention facility that could also answer to his many medical needs. Jabatan also has a pending request in court for medical checkup. He said he had suffered a stroke on the day he was arrested.

Jabatan, according to state witness Baretto, had stabbed at a person in white whom Baretto believed was Olalia. “To make sure he was dead,” Baretto quoted Jabatan as telling him immediately after the stabbing.

This Tuesday at the start of the hearing, lawyer Kapunan cited the paramount importance of the declaration of liberty of even the accused. She complained that the way the presentation of witness is proceeding, “the prosecution is stalling the case” and conducting a trial by publicity as she alleged that the private prosecutors “keep on talking to the press.”

“We are already guilty in the media,” lawyer Kapunan complained to the court.

But the Rizal Trial Court Branch 98 Fiscal Maria Rosnatay reminded the counsels of the accused that the double murder case had taken 14 years before it was finally referred to court, “and in all those times the defense has been given their time. We cannot rush the prosecutors’ presentation of witnesses just for the expediency of the defense,” she said.

Lawyer Kapunan also questioned the nature of witness Baretto’s presentation in light of the state’s impending issuance of hold departure order for all the accused who are still at large. “His (Baretto’s) testimony indicates his direct presence and he appears most guilty,” Kapunan said. She asked why Baretto is not being charged. But the public prosecutor replied that “he’s already under the Witness Protection Program since 1998.”

In the past two hearings Barreto had disclosed to the court that he was a leader of one of the teams under the special operations’ group in 1986. He had previously stated he was assigned by his commanding officer, then Capt. Eduardo Kapunan, to join another team (under SOG) “in order to finish the job” which he was later told (by the other team’s Sgt. Edger Sumido) was about Olalia.

After the soldiers of the SOG including Baretto had brought Olalia and Alay-ay to the SOG ‘safehouse’ in Camp Aguinaldo’s neighboring Murphy, Cubao— Baretto said he left the safehouse with his buddy, Sgt. Rodolfo Sabalza, at around 11p.m.

Out “of exhaustion,” Baretto said he decided to have a break at his parents’ house also in Murphy, Cubao, Quezon City. His own house, he said, was in Lagro.

Baretto reiterated that when they arrived at the safehouse, waiting for them in the conference room were Col. Oscar Legazpi, Major Noe Wong, Capt. Ricardo Dicon and Cecil Arillo. “We reported to them and in the words of Sgt. Sumido, ‘the subject is here and his driver.’”

According to state witness, Col. Oscar Legaspi was a senior aide-camp at the time of then Defense Sec. Juan Ponce Enrile; Maj. Noe Wong was a junior aide-camp; Capt. Ricardo Dicon was an incoming commanding officer of the group; of Arillo, Baretto said that as far as he knew, Arillo at the time was “the public information officer of the Ministry of Defense.”

Col. Legazpi and Maj. Wong left the safehouse not long after the blindfolded Olalia and Alay-ay were brought to the second floor assisted by MSgt. Juan Matango, Baretto said. Arillo told Baretto: “the military exercise is about to happen,” before Arillo also left the safehouse. Capt. Dicon said the same thing, according to Baretto, when Dicon gathered them together for a meeting.

“To my understanding, the ‘military exercise’ means the coup d’ etat,” Baretto said.

Dicon reportedly told the soldiers with the SOG that if they decide to leave the safehouse, they must “return around 4 a.m. as this was the expected time the order (to kill Olalia) will be given.”

After meeting with Dicon, Sumido conducted an ‘after-operation critique,’ Baretto said. They evaluated what transpired, and inventoried their people.

In the post-operation critique, witness Baretto learned that his fellow soldiers had searched and stripped Olalia’s vehicle of its parts.

Baretto said he had planned to leave the safehouse after the critique. But without a car himself, he waited for Sabalza at the garage to hitch a ride. But when Sabalza eventually went to the garage, he told Baretto “there was a new order from Capt. Dicon”: they were to ‘recon’ an area in Antipolo, Rizal where army rangers from Tanay would pass by.

Baretto said he and Sabalza left the safehouse around 9 p.m. for Dicon’s order; they passed the designated area just once and returned to Quezon City.

“Because of exhaustion, I decided to be dropped off at my parents’ house also in Murphy, Cubao, Quezon City,” Baretto said. He told the court he did not know where the other soldiers with him had gone to “but I knew some of my companions went back to the safehouse in 10th Avenue.”

After 12 midnight, Baretto’s buddy, Sgt. Sabalza, came back for him, saying Capt. Dicon “was already forming teams. They plan to take out the ‘visitors,’ referring to Olalia and Alay-ay.”

“Sabalza and I thought it best to inform our senior officials regarding the moves of Dicon,” Baretto told the court. As Sabalza went to get the others from their team, Baretto returned to the safehouse. When Master Sgt. Juan Matango opened the gate for him, Matango told him the group of Dicon had just left the compound aboard two Lancer vehicles, green and cream.

Capt. Dicon and Sgt. Dennis Jabatan were said to be at the green Lancer with Olalia; Viana, Pago, Fernando Casanova and Jose Basera were in the cream Lancer with Alay-ay. Jabatan at the time was a staff sergeant in the Marines, Baretto said. He continued that when Sabalza arrived with Commander Layson and Sgt. Filomeno Maligaya, Layson seemed irritated by the information of Matango.

“He (Layson) ordered that we try to follow and look for our companions,” Baretto said. And so, he drove again the cream Land Cruiser with Layson, Maligaya, Sabalza and Sumido. They headed to Antipolo via Cogeo.

In the area of Antipolo about half a kilometer away from Cogeo Junction, “we heard gunshots ahead of us from the direction of the mountains,” Baretto said. Driving on, they saw Capt. Dicon’s green Lancer parked at the edge of the road.

Baretto stopped the Cruiser 15 meters from Dicon’s Lancer. He got off, leaving the machine running, the headlights on. He said someone from the passenger seat of Dicon’s car approached him.

“I asked him, where is Capt. Dicon? He said he was down there, pointing to the direction ahead of the Cruiser. Seeing that the slope was not that steep, Baretto went down to investigate. “Someone turned off the headlights of the Cruiser, so I had to use my small flashlight. When I turned it on, I saw Jabatan and called his name.”

“He turned to me for a moment, then turned his attention back to the person in front of him – I think it was a person wearing or covered in white, and I saw Jabatan stab at the person twice.” He was kneeling near the white-covered or clothed person.

Then Jabatan approached Baretto. At arm’s length from him, he told Baretto they’d “brought out Olalia, it was already decided.”

Jabatan told Baretto he stabbed at him several times to make sure he (Olalia) was dead, and as he said this, “he showed me a bloodied balisong (fan knife) with a four to five inch blade,” Baretto told the court.

Baretto then left the scene, returned to their parked Cruiser on the road and reported to Capt. Layson, who then directed them to try to follow their companions uphill (where Alay-ay was taken.) They second-guessed where the others may have gone to in order to avoid a PC checkpoint, and they were right. They saw the cream Lancer parked at the right side of the road about a kilometer away from Cavalier’s Village, coming from the junction. Sabalza reportedly noted that Viana “was hiding on the right side of the Lancer.”

They heard shots being fired one by one coming from the back of the Lancer where there were tall cogon grasses.

Baretto got off from their Cruiser after the first two shots to go near the Lancer. The shots did not stop, he told the court. “I guessed I’ve heard four shots when I shouted to Viana’s group: Stop that!”

“We went back to the safehouse in 10th Ave. and arrived there around 2 a.m.,” Baretto said. But before they could take a break, Capt. Dicon ordered them to dispose of Olalia’s car in Banaue, Quezon City. He ordered Sgt. Viana, who hesitated to drive such a stripped off car that only the seats in the interiors had remained. Viana requested Baretto to drive it out of the safehouse compound instead.

After Baretto had driven it outside the safehouse compound, Viana and Cpl. Calino brought it to Banaue in QC.

“It’s like they murdered him again,” Nenita Gonzaga sighed after listening to the testimony. A secretary of Felixberto Olalia (Rolando Olalia’s father and also an acclaimed labor leader) and of the National Federation of Labor Unions since she graduated from secretarial school, she is now the KMU women’s committee leader. Other members of the Kilusang Mayo Uno held a picket again in front of the Rizal Trial Court branch in Taytay during the hearing this Tuesday, even as army soldiers patrolled the area with long firearms.

Olalia’s son, Rolando Rico Olalia, told the gathered unionists that the witness’ testimony corresponds with what he saw when he claimed his father’s body with his two uncles in 1986, and when they saw his bloodied, stripped off car.

Now also a lawyer, Rico Olalia expressed hopes that the rest of the accused will soon be arrested and brought to justice. Both his mother and Alay-ay’s widow had stopped coming to the hearing since the state witness started to give his testimony in court.