“The awards are intended to keep alive the excellent and principled journalism (Chit) Simbulan had always engaged in.” – Ellen Tordesillas, veteran journalist and president of Vera Files

MANILA – Bulatlat.com won the online category of the first Chit Estella Journalism Award in a simple ceremony at the UP College of Mass Communication auditorium.

The Chit Estella Journalism Award was launched on June 24, 2011, named after a veteran journalist who was killed in a vehicular accident along Commonwealth Avenue in Quezon City on May 13, 2011. Her husband is UP professor and political analyst Roland Simbulan

“The awards are intended to keep alive the excellent and principled journalism (Chit) Simbulan had always engaged in,” Ellen Tordesillas, veteran journalist and president of Vera Files, said in a report during the launching of the awards last year. Estella is a co-founder and trustee of the said news organization at the time of her death. 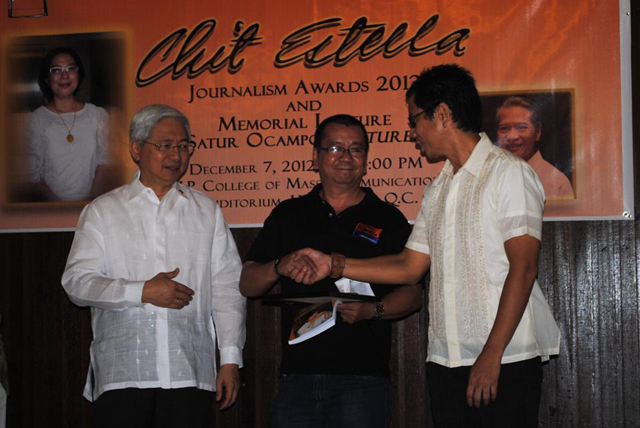 “The family now mostly relies on donations and the assistance of relatives who still have money to spare and lend. While grateful for the donations of instant noodle packets and canned goods like tuna, sardines and the occasional tinned meatloaf, the Diazes are justifiably worried that the almost unchanging diet is bad for their little boy,” Silverio wrote.

The article also tackled the lack of government support that victims of Typhoon Sendong are receiving from the government.

“There was a ‘food for work’ program and another called ‘cash for work,’ but they didn’t last long and not everybody was given opportunities to participate. It was a three to five day-scheme, I was told. Work for three or five days and be paid P200 ($5) every day, or get food packages. The problem was each man was only allowed to register with the program once and that was it,” Yamcy Diaz, one of Silverio’s interviewees and a victim of the typhoon, said.

Victims who were interviewed wondered where the millions in pesos donated to relief efforts are going.

“As the media continues to divulge information on the funds that the affected provinces have received, the public, especially the affected residents are justified in wondering where the money is being used. In the areas frequented by volunteers of humanitarian and relief groups, both local and international, residents complain that they have yet to receive concrete help from the government. Most of the help they are getting, they said, come from the humanitarian groups,” Silverio wrote.

Safe and potable water also remained a problem for the victims of typhoon. They also had to go through a hard time because of losing their homes. Many victims had to live in tents in evacuation areas.

“The back area of the campsite was cleared and toilet stalls were built, numbering nine to 12 in all. Most of the toilets, upon inspection, were foul and dirty. The refugees explained that they couldn’t clean the toilets regularly as they should because the water supply was too far from the toilet area. The stalls for bathing were put up in the front area of the camp site where the water pump is, and where the relief group’s water delivery truck releases its contents through a hose and into a gigantic water bag that functions as the camp’s water storage facility,” Silverio wrote.

“It is clear that three months after Sendong, much still needs to be done to ensure the complete recovery of the affected families. Even as everything appears to have returned to normal for the rest of the city and province — business establishments have opened, the local government offices and police and security agencies have returned to their normal operations — the residents affected by Sendong still have a long way to go before they can pick up what remains of their lives before the typhoon struck.” 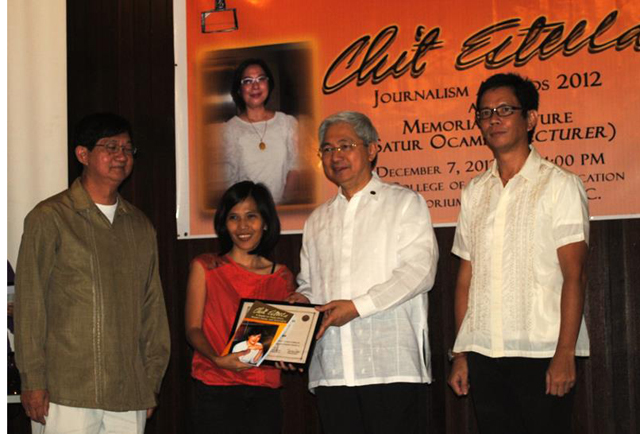 Silverio also won second place in the 2011 Red Cross Award for Humanitarian Reporting with her article titled “Child Soldiers or victims?” which discusses the impact of extrajudicial killings on the children the victims left behind as well as children who have been victims themselves.

Other Bulatlat.com’s reports that were shortlisted as finalists include: Ronalyn V. Olea’s “Jonas Burgos, gentle and brave,” Anne Marxze D. Umil’s “Privatization of government hospitals, further marginalizing the poor in the name of profit” and “K+12, worsening shortages to greet school opening,” and another entry from Silverio titled, “In Makati, the poor of Guatemala Street know nothing about the city’s wealth.”

Reports of the Philippine Daily Inquirer that were shortlisted for the print category include Tonette Orejas’ “Kin of ‘desaparecidos’ keep up fight,” Julie Alipala’s “In Sulu, human rights work starts with letting the people know” and Elizabeth Lolarga’s “356 political prisoners go on hunger strike.”

The winners received P10,000 and a trophy, which was designed by Neil Doloricon, former dean of the UP College of Fine Arts.

The announcement of the winners was held a few days before International Human Rights Day, which, according to Karapatan, have been marred with cases of human rights violations several days before its commemoration.

Satur Ocampo, a former journalist during the time of martial law turned activist and who later became the representative of party-list group Bayan Muna in Congress for three terms, discussed in his memorial lecture the roots of impunity in human rights violations in the country. He also discussed how the government’s counterinsurgency program has turned into a war against its own people.

Ocampo, who now writes a column for the Philippine Star, recalled his days as a business reporter for the Manila Times. There were times, he said, that his stories would not be published or asked to be toned down so that it would not antagonize companies that advertise in the paper. In one instance, he wrote an article on Kabataang Makabayan, a progressive youth organization that he co-founded, but was told, “You are a business reporter. Why are you writing this?”

He gave credit to the likes of Chit Estella, then among the young journalists during the time of martial law, saying that if it were not for them, the media today would not enjoy this kind of freedom.

Fast forward to today, Ocampo said the kind of abuses that happened during the Spanish occupation is still taking place. They are, however, “more modern.”

President Benigno “Noynoy” C. Aquino III, he said, is implementing a counterinsurgency program patterned after the US Counterinsurgency Guide of 2009. He noted that Aquino’s Oplan Bayanihan uses the strategy of “winning the hearts and mind,” which did not work in Iraq.

Ocampo said there were no reforms instituted among the ranks of the Armed Forces of the Philippines after Marcos was ousted. The same military, he said, that was used to implement martial law and abuse the people for 40 years was adopted en masse by the late president Corazon Aquino.

Amid this, Ocampo said, the government continues to fail in addressing reforms in socio-economic, cultural and political affairs. 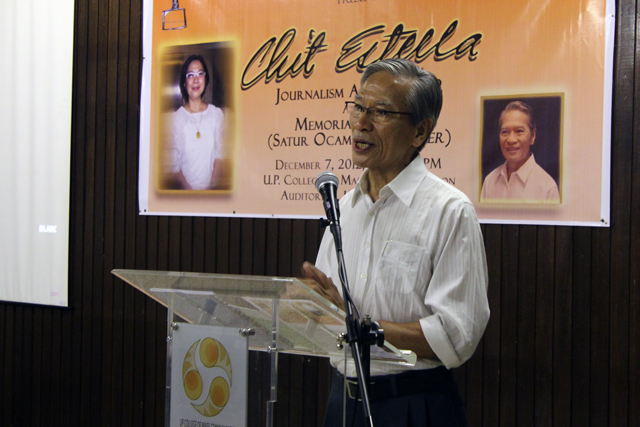 He called on Aquino to put a stop to killings and urged him, as commander-in-chief, to assume command over military units. Citing Karapatan’s yearend report on the human rights situation in the country, he said human rights violations do not choose its victims, even children are increasingly becoming victims too.

Ocampo said he was not surprised that Bulatlat.com dominated the online category for its human rights reporting. He added that the Philippine Daily Inquirer, too, is sympathetic to issues of human rights.

Roland Simbulan, Estella’s husband, said his family and their partners, would continue to hold the awards, which would focus on human rights reporting.

Roland Tolentino, dean of UP College of Mass Communication, said he looks forward to the day that there would not be a need to hold the Chit Estella Journalism Awards. It means, he said, that most if not all news media outfits are doing their responsibility in doing in-depth reporting especially on human rights.