Aquino asked to punish US Navy for violation of PH laws

“Like what we did with the Chinese poachers who entered the Tubbataha Reef area, the USS Guardian officials and crew should be arrested and apprehended. The Philippine government should be the one doing the direct investigation and take custody of the violators.” — Kalikasan PNE

MANILA – Anyone who has dived or snorkeled can tell how spectacular a reef’s coral garden is, and its citizens of colorful fishes of all sizes and colors. According to a 2005 World Bank report, the Philippine coral reefs helped raise for the local economy at least $1-billion annually through tourism and sustainable fisheries. But the beauty of a reef’s biologically diverse marine life is not the only reason why green groups are urging more people to help protect coral gardens in reefs.

Reefs protect the shoreline from storms and surges, reducing waves, buffering the shores, and thus preventing erosion in coastal areas, said Reefrelief.org. The reef also supports a huge diversity of marine life including fish, a primary source of protein for people living along the coast such as most Filipinos. “Coral reefs are one of the most biologically diverse ecosystems on earth, rivaled only by tropical rain forests,” Reefrelief said in its website. Reefs are thus important to life, safety and dreamed of economic prosperity of most Filipinos.

One of such reefs is the Philippine Tubbataha Reef, regarded as one of the most biologically diverse areas in the Coral Triangle, which in turn is said to be the world’s ‘cradle of marine life.’ Because of its importance, Philippine laws say it is off-limits to fishing and harvesting of corals, wildlife and any marine life. In 1992, UNESCO designated the reef a World Heritage Site.

The recent incident of a US warship “accidentally” entering the off-limits site, ramming and getting stuck into the reef for four days now, has sparked outrage and not just from the environmentalist groups. In the protests near the US Embassy in Manila, January 21, groups questioned the Aquino government for not even mustering a squeak of protest against the US military intrusion in the reef. 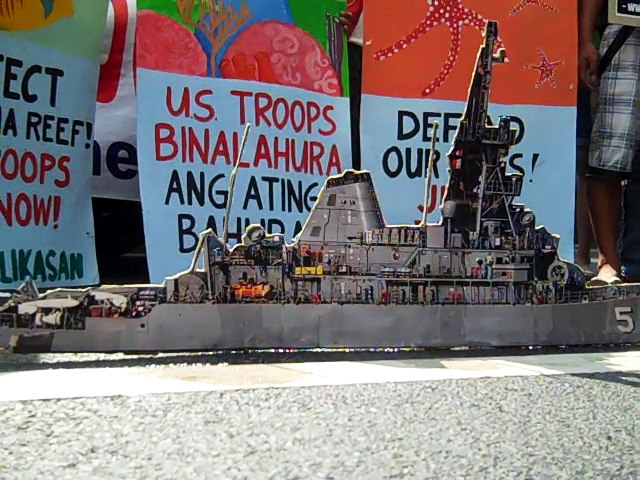 Protesters bring for burning an image of US Navy minesweeper USS Guardian. The ship is currently reportedly still battering the Tubbataha Reef. (Photo by Kodao / bulatlat.com)

Nearly four days since minesweeper USS Guardian rammed a part of the Tubbataha Reef, got stuck at the reef and as such got exposed for having trespassed at the area, various groups pressed President Benigno “Noynoy” Aquino III to call for an investigation and make the transgressor pay. They demanded the pullout of US troops in the Philippines and an end to Visiting Forces Agreement (VFA), the agreement blamed for allowing US troops, ships and arms into Philippine territory.

Protesters who marched Monday from Taft Avenue intending to hold a picket in front of the US Embassy in Manila were blocked by the police at Kalaw Avenue. During the program held at the streets, leaders of various peoples’ organizations took turns questioning why the mine sweeper of the US Navy was trespassing at the protected area. And why the Aquino government did not even uphold its laws, and instead announced that it would “help” the US Navy.

“The US military is either too stupid (to have misnavigated that bad, when it’s supposed to be a minesweeper), or it is lying to Filipinos as to the nature of its sweep in that part of a Philippine sea, or it is protecting whatever it is carrying on board that it doesn’t want us to see,” Clemente Bautista, national coordinator of Kalikasan Peoples’ Network for the Environment, told Bulatlat.com.

During their march-protest toward the US Embassy, Clemente questioned the “silence” and the still continuing support of the Aquino government on US troops, warships and planes coming here.

“It will take thousands of years before reefs recover from the least amount of damage. Whatever damage the USS Guardian has caused to the reef cannot be reduced to quantifiable data nor can it be described as minimal, yet President Aquino is taking all these in stride. This display of docility is shameful as it is contemptible,” said Gabriela Women’s Party Representative Luz Ilagan in a statement.

Ilagan lamented “Malacanang’s perceptible lack of outrage as well as its apparent disinterest” in holding the US government accountable for the damage that the USS Guardian has inflicted on Tubbataha reef.

Speaking during the rally, Bautista said the Philippine government should assert its jurisdiction and authority over our territorial waters.

“Like what we did with the Chinese poachers who entered the Tubbataha Reef area, the USS Guardian officials and crew should be arrested and apprehended. The Philippine government should be the one doing the direct investigation and take custody of the violators,” Bautista said during their protest.

Instead of doing that, the Aquino government and the Armed Forces of the Philippines “just accepted the US Navy excuses” when there remains “prima facie evidence that the US has deliberately violated our laws,” Kalikasan PNE’s Bautista noted. 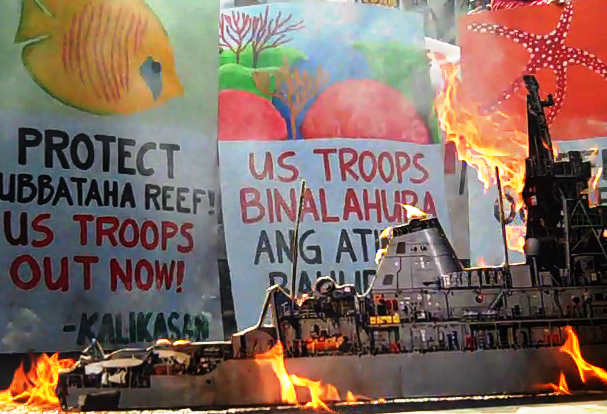 As of this writing, the USS Guardian remains stuck over and against certain portions of the Tubbataha Reef. It continues to be rocked and buffeted by strong winds and current against the reef. Green groups grit their teeth at the likely damage the warship may end up inflicting on the reef. There is no comprehensive assessment yet of the reef’s damage.

As for the mine sweeper, despite the US Navy assurances that the freshly refueled ship is not leaking oil or other toxic wastes into the sea, various groups still warned against the possibility as the US military continues to fail at extricating the warship.

“First, they (Aquino government) have caused too much damage in our typhoon-battered region because of large-scale operation in mining and logging, now US is destroying one of the world’s protected heritages here in our country,” said Ivy Tupas, spokeswoman of League of Filipino Students in Ateneo de Davao University, in a statement.

Transport Secretary Joseph Emilio Abaya said in a press briefing that Aquino has directed investigators and divers to be “proactive” in ensuring that no further harm would be done on the treasured coral ridge.

But given the Aquino government-approved increased traffic of US warships in Philippine territory including the sea, traffic which various groups say may have been going on over other treasured sites before, being “proactive” in preserving treasured coral ridges is now deemed as “hypocritical” of Aquino. If Aquino would not prevent such traffic in the future, they said in their protest.

“Last year, Glenn Defense Marine Asia, a Malaysian contractor to US military warships, dumped toxic wastes into Philippine seas, and the US – Aquino administration and US Embassy are quick to deny all allegations,” student-leader Tupas said.

“The Aquino government should be held liable, because it would not have happened in the first place if it abrogated the Visiting Forces Agreement (VFA). The Philippines is at the losing end of the agreement, with the US continuing to disregard our laws, committing crimes against our people and exploiting our natural resources,” Einstein Recedes, spokesman of Students Christian Movement, said.

“The damage of the corals at Tubbataha caused by the USS Guardian is only a small part of the bigger damage being caused by the permanent presence of US troops, ships, drones and jetfighters in the Philippines,” the Communist Party of the Philippines (CPP) said in an emailed statement.

“The much bigger picture involves the subjection of the Philippines to US military dominance, in order to use the Philippines as a platform for US hegemonist power projection in the Asia-Pacific region to achieve military and economic dominance in the region,” the CPP said.