You Are Here: Home → 2013 → February → 27 → Public to bear costs of state-guaranteed profits in LRT privatization

Public to bear costs of state-guaranteed profits in LRT privatization

If the Aquino government is willing to incur more debts to guarantee the profits of whoever will win the LRT1 project, why can’t it incur those debts for investing instead in LRT’s expansion?

MANILA – Experiences show, Filipino consumers and taxpayers suffer worse by way of higher bills with every case of privatization. After the National Power Corp. (Napocor) was privatized, consumers are being forced to pay more to shoulder stranded costs arising from sweetheart deals with private power generators. After the MRT was privatized, the government has insisted to hike fares to pay for financial obligations arising from guaranteed profits and debt payments. Both punish the public with exorbitant fees and drain the already scant resources of government. These are just two of the most recent examples of costly privatization.

The same fate awaits the Filipino consumers and taxpayers if the P60-billion privatization and line extension of LRT 1, the largest public-private partnership (PPP) project of President Benigno Aquino III to date, is to push through. (For details of LRT 1 privatization, download a copy of the draft 32-year concession agreement here.)

The draft contract for LRT-1 privatization shows that despite the Aquino government’s repeated denials, it will in fact still continue the practice of giving state guarantees just to push its privatization program. Unfortunately, such guarantees come at a great expense to the public.

While the private operators of the MRT had obtained a guaranteed 15-percent return on investment (ROI) annually, the winning bidder for LRT 1 will enjoy what is called as “top-up subsidy.” The Department of Transportation and Communications (DOTC), the agency in charge of LRT 1 privatization, explained that the top-up provision means the government would pay the gap between the pre-approved fares promised in the concession deal and the actual fares the authorities can actually implement. It is essentially a profit guarantee for the private operator, written in Section 20 (on Concessionaire Revenues) of the draft concession agreement for LRT 1 privatization. 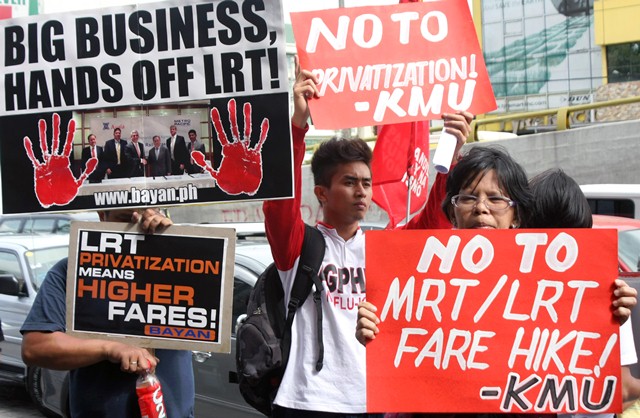 In the draft contract, to ensure the commercial profitability of the system the concessionaire will be entitled to a “notional fare” (Section 20.3.a) that shall be agreed upon by the government and the winning bidder. The “notional fare” would be periodically adjusted (read: increased) during the 32-year concession period.

Section 20.4.a of the draft contract says that: “In any period, where the Approved Fare is lower than the Notional Fare, the Grantors shall pay to the Concessionaire a Deficit Payment (“DP”), to reflect the difference between the Notional Fare (NF) and the Approved Fare (AF).” The Grantors refer to the DOTC and the Light Rail Transit Authority (LRTA).

This means that if the DOTC or LRTA could not implement a certain fare level for LRT 1 as committed in the concession agreement – it could happen with strong public opposition and/or regulatory, legislative or judicial intervention – the government would then have to pay the private operator its expected revenues from the rejected fare level.

The government can only use public money to pay for its guarantees. As such, the public will not escape the greed of the private operator – whether as LRT 1 commuters (who will shoulder the fare hike) or as taxpayers (who will bear the top-up subsidy). Expectedly, the prospective LRT 1 operators that include San Miguel Corp. Infra Resources, Inc.; Light Rail Manila Consortium of Manny V. Pangilinan and the Ayala group; DMCI Holdings, Inc. of the Consunji group; and the foreign consortium MTD-Samsung of Malaysia and South Korea are pleased with the deal that they will be competing to secure from the Aquino administration.

The top-up subsidy in LRT 1 privatization is a form of regulatory risk guarantee that the administration’s economic managers first unveiled in September 2010. It was announced ahead of Aquino’s working visit to the US where he promoted his PPP program to American investors. Two months later, Aquino officially declared the scheme as policy in a PPP Summit his government organized to jumpstart its privatization initiatives. In his speech, Aquino said:

“The government will provide investors with protection against regulatory risk. Infrastructure can only be paid for from user fees or taxes. When government commits to allow investors to earn their return from user fees, it is important that that commitment be reliable and enforceable. And if private investors are impeded from collecting contractually agreed fees – by regulators, courts, or the legislature – then our government will use its own resources to ensure that they are kept whole.”

Giving profit guarantees is standard practice in privatization, but this particular regulatory risk guarantee is unique to the Aquino administration. His economic managers designed it to avoid criticisms that he just is repeating the same disadvantageous perks given to PPP investors in the past that resulted in the financial bleeding of government such as in the case of Napocor and MRT. But the top-up subsidy or regulatory risk guarantee is essentially the same as the take-or-pay provisions of past PPP deals.

The government and the end-users will still assume all the risks of operating the infrastructure while the profits of the private operators are guaranteed.

Burdening the people with more debts

Where will the government get funds for its promised LRT 1’s top-up subsidy? It is unlikely to come from public savings: the national budget deficit remains huge at P127.3 billion, and the national government remains heavily indebted with more than P5.38 trillion in outstanding debt as of November 2012.

Like past presidents, Aquino plans to borrow more to finance his PPP program including his profit guarantees for participating private corporations. The National Economic and Development Authority (Neda) had announced that government will tap multilateral institutions to provide for the guarantees so that when PPP investors face risk, they can still “be paid fast and immediately”.

One of the multilateral lenders that made a pledge to fund the government guarantees on PPP projects was the World Bank. It issued the commitment during the 2010 PPP Summit. Incidentally, the World Bank through its investment arm International Finance Corp. (IFC) is the transaction advisor of the DOTC and LRTA in the LRT 1 privatization.

Not only is Aquino’s planned LRT-1 privatization set to burden the people financially, its regulatory risk guarantee is also set to further undermine the already weak system of check and balance between its regulatory authorities, courts or Congress.

For example, to prevent the implementation of an LRT fare hike, the people may seek relief from the Supreme Court (SC) through a temporary restraining order (TRO). The DOTC and LRTA would then be prevented from implementing the fare hike. But the private LRT 1 operator could still collect the revenues from the fare hike through government-guaranteed Deficit Payments, thus effectively negating the High Court’s intervention.