On the question of Philippine sovereignty over Sabah

Is there a basis for the claims of the Sultanate of Sulu over Sabah? Could the act committed by Kiram’s followers be called an incursion or are they right in saying that it is Malaysia which has no rightful claim to Sabah and are therefore the invaders?

The fighting in Sabah between the followers of Sulu Sultan Jamalul Kiram III and Malaysian security forces have been waging and piling up casualties the past few days. The Aquino government, instead of protecting Kiram and his followers who are Filipino citizens, called the Sultanate of Sulu’s assertion of sovereignty over Sabah as “futile” and even threatened to sue and imprison them. In effect, it has also set aside Philippine claims to Sabah.

Is there a basis for the claims of the Sultanate of Sulu over Sabah? Could the act committed by Kiram’s followers be called an incursion or are they right in saying that it is Malaysia which has no rightful claim to Sabah and are therefore the invaders?

Bulatlat Europe correspondent held an interview with Prof. Jose Maria Sison, Chairperson of International League of Peoples’ Struggle, to look at whether there is a historical basis for the claims of the Sultanate of Sulu and to know the Left’s views on the current standoff.

1. The Sulu sultanate was supposed to have ceded Sabah to the Republic of the Philippines in 1962. In the first place, how did the sultanate come to rule and own Sabah?

JMS: The Sulu sultanate had ruled and owned Sabah since 1704 when this was ceded by the Sultan of Brunei as reward to the Sultan of Sulu for helping him defeat his enemies. I presume the Sabah people of Mindanao ancestry, especially the Tausugs, Samals, Iranons and others, were the main political base of the Sulu sultanate in Sabah. 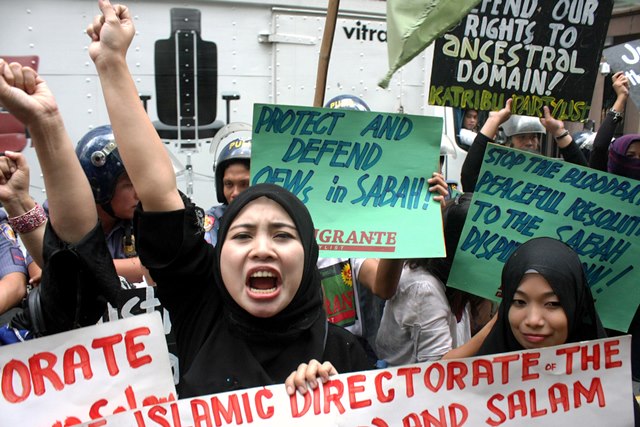 Progressive groups protest Malaysia’s use of force against Filipinos in Sabah in a rally at the embassy of Malaysia in Makati City, March 5 (Photo by Jhun Dantes / bulatlat.com)

The best known documentation of the scope of the Sulu sultanate’s rule and ownership of Sabah is the 1878 lease agreement with the British trading syndicate of Dent and Overbeck. Subsequently, the Chief Justice C. F. C. Macaskie of North Borneo recognized the proprietary rights of the Sulu sultanate in a ruling in 1939 in a related civil suit about the payment of rent (padyak) to the heirs of the sultan of Sulu.

2. Are there people of Mindanao ancestry in Sabah? How many are they or what is their proportion in relation to the entire population?

JMS: Since time immemorial, the Bajaus, Tausugs, Samals, Iranons and other people from Mindanao have migrated to Sabah. The biggest inflow of people from Mindanao to Sabah occurred during the hostilities between the Manila government and MNLF. This coincided with Tun Mustapha’s (a Bajau) relying on people of Mindanao ancestry for political support and facilitating the acquisition of Malaysian citizenship by a significant number of Moro refugees and migrant workers.

In 1970 the population of Sabah was only 651, 304. It jumped to by 1.5 million to 2,468,246 in 2000 and further on to 3,117,405 in 2010. People of Mindanao ancestry comprise a big part of the Sabah population and are more than the widely acknowledged 800,000 Filipinos. If they are aggregated instead of divided into several ethno-linguistic groups, they can outnumber the Kadazan-Dusun, which is 17 per cent of the population. Also of significant size are the people of Chinese origin, comprising 9 per cent of the population. Three-fourths of the people live on the coasts of mainland Sabah and outlying islands.

3. What is the nature of the 1878 agreement between the Sulu sultanate and the British? Did the sultanate sell or lease Sabah to the British?

JMS: On 22 January 1878, an agreement was signed between the Sultanate of Sulu and the British trading company (Alfred Dent and Baron von Overback), which stipulated that the former was leasing (padyak) North Borneo (Sabah) to the latter in return for payment of 5000 Malayan Dollar per year. On 22 April 1903 Sultan Jamalul Kiram signed a document leasing additional islands in the vicinity of the mainland of North Borneo from Banggi island to Sibuku Bay to the British North Borneo Company.

The sum of 5,000 dollars a year payable every year from 1878 onwards was increased to 5,300 dollars a year payable every year from 1903 onwards. Every year, the Malaysian Embassy in the Philippines issues a check in the amount of 5,300 ringgit (US$1710 or about 77,000 Philippine pesos) to the heirs of the Sultan of Sulu. The British wrongly translate the word padyak in the 1878 agreement as cession, instead of lease, in order to make the false claim that the Sulu sultanate had ceded sovereignty and ownership to them.

4. Did Spain ever come to acquire and control the Sulu sultanate and its territories? If so, which territories?

JMS: The Sultanate of Sulu came under the control of Spain in1878. It was forced to sign a document giving to Spain all of the Sultanate’s properties in Palawan and Sulu but not North Borneo. Nevertheless, the Spaniards brought Chavacano-speaking Filipinos to settle in Sempurna, Sabah .

In 1885, Great Britain, Germany and Spain signed the Madrid Protocol to assure Spain of its continued sway over the Philippine islands. In the same agreement, Spain gave up all claims of sovereignty over the territories of the Borneo which belonged to the Sultan of Sulu (Jolo). These included the neighbouring islands of Balambangan, Banguey, and Malawali, as well as all those within a zone of three maritime leagues from the coast. They were administered by the British North Borneo Company.

5. After the US conquered and colonized the Philippines, what was its policy on Sabah? What has been the policy of Filipino officials since the Philippine Constitution arose in 1935?

JMS: In 1906 and in 1920, the United States officially reminded Great Britain that North Borneo did not belong to the Crown and was still part of the Sultanate of Sulu. Even then, the British turned Sabah into a Crown Colony on July 10, 1946. The Philippine Constitution of 1935 states that the national territory of the Philippines included, among other things, “all other areas which belong to the Philippines on the basis of historical rights or legal claims”. Even before Sabah was incorporated into Malaysia in 1963, the Philippines had sent delegations to London reminding the British Crown that Sabah belonged to the Philippines.

JMS: On 12 September 1962, during President Diosdado Macapagal’s regime, the territory of North Borneo or Sabah and the full sovereignty, title and dominion over the territory were ceded by the then reigning Sultan of Sulu, HM Sultan Muhammad Esmail E. Kiram I, to the Republic of the Philippines. The cession effectively gave the Philippine government the full authority to pursue the Sulu sultanate’s claim in international courts. The Philippines broke diplomatic relations with Malaysia after the federation included Sabah in 1963.

Republic Act 5446, which took effect on 18 September 1968, regards Sabah as a territory “over which the Republic of the Philippines has acquired dominion and sovereignty.” On 16 July 2011, the Supreme Court ruled that the Philippine claim over Sabah is retained and may be pursued in the future.

7. How valid is the argument of Malaysia that the people of Sabah themselves overruled Philippine sovereignty over Sabah by voting for incorporation in Malaysia?

JMS: The formation of Malaysia in 1963 was rammed through by the British imperialists and the local reactionaries in Malaya under the pretext of combating communism and so-called Indonesian expansionism. The argument of the Kuala Lumpur government that all historical, political and legal issues have been overcome by the people of Sabah exercising the right of self-determination and voting for incorporation in Malaysia does not hold and cannot stand because the voting done in 1963 was under conditions of coercion and manipulation by British colonialism and their Malaysian puppets.

8. Have Philippine regimes been consistently diligent in trying to assert Philippine sovereignty over Sabah? In any case, why?

JMS: Despite the validity of Philippine sovereignty over Sabah, Philippine regimes have failed to assert it consistently, diligently and effectively because of their subservience to the US imperialism. Macapagal submitted to US dictates that the Philippine government must put Indonesia’s Sukarno in a corner through the tripartite Maphilindo scheme and the Manila Accord and give way to the formation of Malaysia without demanding the non-incorporation of Sabah in Malaysia.

Marcos organized and trained Moro volunteers to make an expedition to Sabah but these volunteers became the victims of the Jabidah massacre as a result of the exposed corruption of the project officers. Since then, the Philippine has put the Sabah issue on the backburner. President Cory Aquino became very obsequious to Malaysia by sidling up to Malaysia and forgetting about the Sabah issue.

JMS: I think that those hundreds of followers of the Sulu sultanate who sailed to Sabah were basically making a political demonstration to assert Philippine sovereignty and the authority and proprietary rights of the Sulu sultanate. They were simply linking up with their fellow Filipinos in Sabah. They announced that they did not go there to engage in war.

The current Aquino regime is absolutely wrong in violating and in effect casting away Philippine sovereignty over Sabah, in opposing the basically political act of the hundreds of followers of the Sultan of Sulu in upholding the sovereign interests of the Philippines as well as the local authority and proprietary rights of the Sulu sultanate over Sabah and, worst of all, in actively urging the Malaysian authorities and armed forces to massacre those Filipino citizens who expect to be protected by the Philippine government, especially on territory belonging to the Philippines.

It is a criminal and treacherous act for the Aquino regime to condemn the Filipinos and cheer on the Malaysian land grabbers to massacre Filipinos. Malaysia compounds its landgrabbing crimes with butchery in bombing and massacring Filipinos who are poorly armed and are practically without arms.

10. In view of the attitude manifested by Aquino, encouraging the Malaysian authorities to take as much repressive measures as they wish against Filipinos, what are the adverse consequences that we can expect? Please mention the consequences to the ordinary working people, be they migrants from the Philippines or longstanding Sabah inhabitants of Mindanao ancestry.

JMS: For quite a number of years already, the Malaysian authorities have been systematically trying to cut down the inflow of Filipino workers into Sabah, whether these come from the Moro areas or from elsewhere in the Philippines. They prefer to get workers from South Asian countries and discourage Filipino workers from coming in by subjecting them to human right violations.

The Filipino workers are discriminated, against, bullied and harassed by the Malaysian police. They are easily deported and are beaten before they are deported. The most maltreated are workers from the Sulu archipelago. These workers easily sail to Sabah in order to look for job opportunities. But the Malaysian authorities try to discourage them through harsh measures. They are now emboldened by Aquino to engage in mass deportations of Filipinos from Sabah.

The Malaysian authorities are violently opposed not only to the proprietary rights of the Sulu sultanate but also to the rights of ancestral domain of the ordinary land-tilling Sabah people of Mindanao ancestry who have lived for so many generations in Sabah. It is difficult for them to acquire land to till and yet it is so easy for the Malaysian authorities to take away the land from them.