The opening ceremony of this year’s film festival was held in time for the 117th anniversary of the Battle of Manila when Philippine hero Andres Bonifacio led Filipino revolutionaries in a battle to take the city from Spanish forces, August 29-30, 1896. The festival is also part of the year-long celebration of the 150th birthday of Bonifacio.

The film festival has formally opened on August 29 at the UP Film Center in Diliman, Quezon City with a forum and screening of Supremo and the late director Lino Brocka’s film PX. Students from different schools attended the opening.

Eco said the opening ceremony of this year’s film festival was held in time for the 117th anniversary of the Battle of Manila when Philippine hero Andres Bonifacio led Filipino revolutionaries in a battle to take the city from Spanish forces, August 29-30, 1896. The festival is also part of the year-long celebration of the 150th birthday of Bonifacio, she added.

The opening of the film festival, Eco said, also coincided with the visit of the US Secretary of Defense Chuck Hagel in the Philippines, August 29. The mission visit of Hagel in the country was reportedly meant to push for an increase in US rotational military presence in the country.

Pandayang Lino Brocka is a yearly event of Tudla Productions in cooperation with the National Commission on Culture and the Arts (NCCA), University of the Philippines Film Institute, Rotary Club Manila Kalaw, UP Aperture, INTECH and Liga ng Kabataang Propagandista.

Tudla Productions is an alternative, non-profit group of filmmakers, students and cultural workers who utilize different media in drawing attention to the plight and struggles of marginalized sectors and issues of national significance.

“The Pandayang Lino Brocka Political Film and New Media Festival is a cultural gathering that aims to inspire the creation and popularization of truthful, artistic and relevant audiovisual works to enlighten and cultivate critical consciousness of the mass audience. This maiden launch of this festival in 2009 aims to be an aggregate of efforts in political cinema production and distribution in the first decade of the 21st century, a time of worsening economic crisis aggravating the poor people’s plight,” Tudla said in its press release.

Unlike mainstream film festivals, the Pandayang Lino Brocka Film Festival screen movies that have relevance to the country’s present conditions and the struggle of the Filipino people.

Eco said the film festival seeks to awaken the patriotism of Filipino to strengthen the struggling against impositions of the US government in the political, economic, military and cultural affairs of the country.

“Like Bonifacio, our youth and people must defend our national patrimony and sovereignty against foreign rule and dictates,” she said.

The highlight of this year’s political film and new festival is the screening of the Brocka’s PX starring Hilda Koronel and Philip Salvador. “The film is a glimpse of a period in Philippine history when the Filipino people’s lives are tied to the base and its soldiers, when poverty, prostitution and criminality are rampant and justice is out of reach.”

The film festival will also screen public service advertisements or PSAs made by independent and progressive film makers such as ST Exposure, Kilab Multimedia and JL Burgos among others.

The festival also gave special citation to Alfred Vargas for producing “Supremo,” a film about Bonifacio and the Philippine revolution and to scriptwriter of PX, Ricky Lee.

Lee is a multi-awarded scriptwriter who wrote more than 100 films since 1973 and earned 50 awards in the process. Lee wrote scripts for classic movies such as Himala, Salome and Karnal among others.

Supremo was directed by Richard Somes with Vargas playing Bonifacio. “Supremo exemplifies Bonifacio’s passion, courage and humanity as the founder of the KKK or Katipunan, their Supremo, and the leader of Philippine Revolution—that movement which finally brought down three centuries of Spanish colonial rule,” Eco said.

“There is a battleground in the field of filmmaking and artistic production—the struggle for the hearts and minds of the people. This festival engages itself in this battle, as it campaigns for artists and audience to revert from the dominant practice of local mainstream and Hollywood entertainment production and consumption to film as a platform for social and political commentary,” Tudla said. 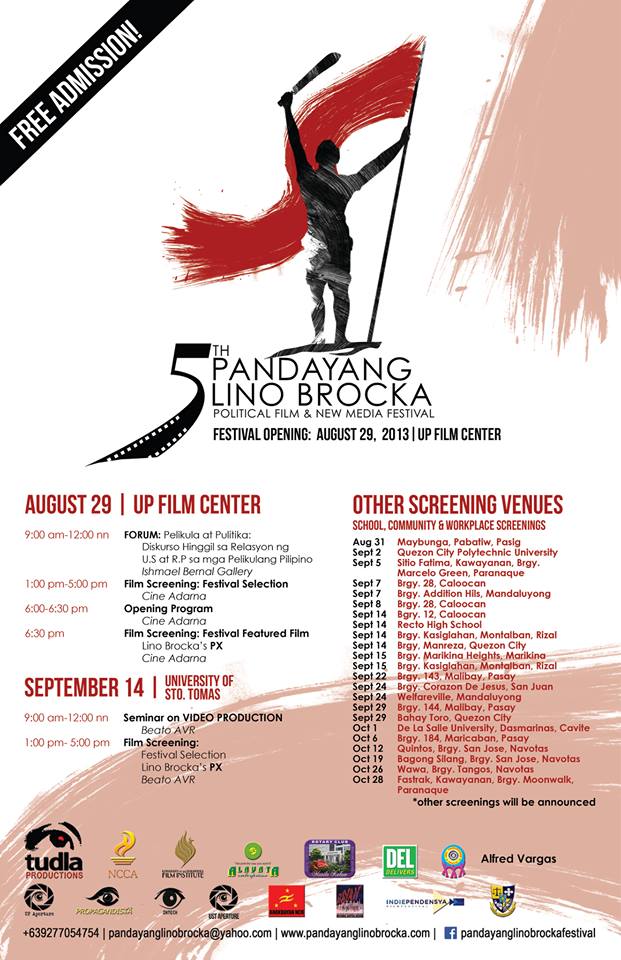 The next screening of Pandayang Lino Brocka is on Sept. 14 at the University of Sto. Tomas with a seminar workshop on video production.