This Friday, April 26, Bayan, the umbrella organization of progressive groups based in Metro Manila, announced that they are now all set to launch a two-day protest during the expected two-day state visit of Obama early next week.

MANILA – Days before US President Barack Obama flies to the Philippines, various “you are not welcome” protest actions and gatherings in Metro Manila and other regions of the Philippines have been conducted. This Friday, April 26, Bayan, the umbrella organization of progressive groups based in Metro Manila, announced that they are now all set to launch a two-day protest during the expected two-day state visit of Obama early next week. They announced their plans to “hound” Obama with protests as they burned a skull-spangled US flag, beneath the monument of revolutionary leader Andres Bonifacio.


Protest actions in the Philippines next week include a protest march to the former US air force base in Clark, Pampanga, and protest caravans and marches across Mindanao where US troops have been stationed since 2002. Groups from Southern Tagalog are also expected to troop to Metro Manila.

In Manila, Bayan will converge at the Liwasang Bonifacio on April 28 before marching to the historic Mendiola bridge where they will hold a program. A giant effigy of a puppet president Benigno Aquino dragging Obama on a chariot is announced as the visual centerpiece of the protest.

Bayan also announced yesterday that it is coordinating with groups from Japan and South Korea for continued protests against plans to increase US bases and troop presence in the region along with a renewed push for the US-led trade pact that is the TPPA.

The group has decried the railroading of the Agreement on Enhanced Defense Cooperation which it described as a de facto basing pact that signals a second US military occupation. Bayan also objects to the TPPA which it said will result in amendments to the Philippine Constitution and the removal of any protection for the domestic economy.

Before they burned a US flag at Liwasang Bonifacio this Friday, Mark Louie Aquino, Bayan Metro Manila secretary general, scoffed at the broadly hinted “false promises” that US would help the Philippines in its conflict with China. This issue is one of the reasons being cited by the Aquino administration to present the “special relationship” with the US government and its military’s increasing access in the Philippines as something this country needs, “for minimum, credible defence posture,” as the defense and the foreign affairs secretaries often put it. 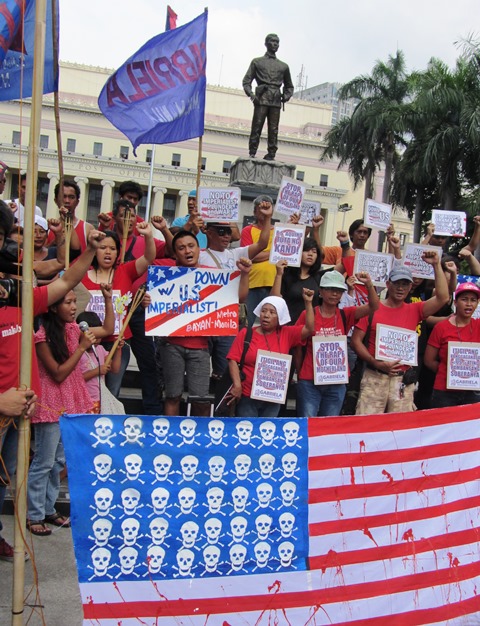 Bagong Alyansang Makabayan (Bayan) in Metro Manila said schedules for their 2-day protest next week are all set to tell Obama that he and his troops are not welcome in the Philippines because of their “evil agenda in the country and the rest of the Asia Pacific region.”

Last Tuesday, Obama kicked-off his Asian Tour in Japan, South Korea, Malaysia and the Philippines to push for the US military pivot and the Trans Pacific Partnership Agreement (TPPA).

The US government’s biggest military bases in Asia are in Japan and South Korea, so far. With their announced pivot, they have been “railroading the conclusion of an access agreement of US troops to Philippine territory and military facilities,” said Aquino of Bayan-Metro Manila.
Patriotic groups regard this as a new military basing agreement, citing the definitions of the US Department of Defence of “military bases,” and the scant details about its content so far revealed by the Philippine panel. News reports said negotiation and finalization of the Framework Agreement on Increased Rotational Presence and Enhanced Defense Cooperation (FA-IRPEDC) are ongoing, being rushed even, in time for the state visit of Obama.

Under the FA-IRPEDC, or Agreement on Enhanced Defence Cooperation, the Philippine government is reportedly agreeing to give full access to US troops and their warships of stations and facilities of the Armed Forces of the Philippines (AFP) nationwide, plus the former US military bases in Clark and Subic.

On top of these, US troops already have camps largely for their use alone in Zamboanga City, Marawi City, and Quezon City.

The agreement under negotiation reportedly will allow “rotational presence” of deployed military forces of the US government in the country, without limits on the number of troops, territorial scope and duration of stay.

The said agreement in the making is introduced by the panel of negotiators from the Philippine and US Departments of Defence as an executive agreement. As such, they claimed it does not need the approval of the Philippine Senate to be legally binding.


“This access agreement between the US and PH governments is nothing but a one-sided pact for the sole benefit of the Obama administration, and not for the Filipino people, contrary to its justification about AFP modernization. Upon entering FA-IRPEDC, the country will only be dragged into wars being mongered and instigated by the US,” said Mark Louie Aquino.

Earlier in the week, members of the Philippine police water cannoned protesters led by the Bagong Alyansang Makabayan as they marched to the US Embassy in Manila. In observance of Earth Day in various cities in the country, the increased presence of US troops and their environmentally destructive ships, weapons and wastes were also condemned.

This coming Sunday, youth groups led by Kabataan Partylist and the League of Filipino Students are set to hold a “SOLIDARITY PET WALK” for Philippine sovereignty. As the activists brand a puppet president as “puppy” president, they said they will walk their pet dogs to proclaim their pets are not US puppies. They are inviting other pet owners and health buffs to join their walk at Quezon Memorial Circle.

In Bicol where a month-long US joint military exercises, dubbed as Balikatan, had started last week, thousands have joined an anti-Balikatan alliance, and they are also holding protests in the region, said Aquino of Bayan-MM.