“What we are seeing here is not just the violation of workers’ rights but the government’s collusion with big capitalists as shown in its inaction on labor disputes. The government is standing idly by as violations of trade-union rights continue to be committed.” – KMU

MANILA – If only statements coming from the Labor Department are to be believed, then all is well in the country’s labor front. Labor Secretary Rosalinda Baldoz has claimed recently that the Philippines does not have problems with workers’ rights. But labor unions currently fending off attacks by their employers fiercely disagreed.

“Perhaps Baldoz’s wealth has again increased, allowing her to travel to other planets,” Elmer ‘Bong’ Labog, chairman of KMU, said in a statement. He branded Baldoz’s boast as “so out of this world.”

Baldoz made the announcement amid news that Filipino workers are dying in workplaces from accidents that could have been avoided, or else they are getting fired for pursuing their union rights, or they are failing to enjoy their legally mandated benefits due to contractualization of their jobs.

Union leaders are also complaining of harassment and being under surveillance by the combined forces of their employers’ security, goons and state agencies such as the armed security personnel of economic zone authorities and local police.

Last Monday (June 16), the KMU along with members of youth group Anakbayan, Gabriela, other unions and the labor center’s allied organizations in Southern Tagalog drove a caravan to the national headquarters of the Labor department in Intramuros, Manila, and from there, they held a rally at the Light Industry and Science Park in Cabuyao, Laguna, where NXP Electronics, formerly a division of Dutch-owned Philips Semiconductors, is located.

They managed to get near the NXP gates inside the economic enclave, but they found the company fenced off with barbed wires.

Inside the workplace, “it’s prohibited among workers to engage in a discussion. When they do, civilians holding a mysterious clutch bag would approach the workers and stop them,” said Cathy Oñate, one of the 24 leaders of the workers’ union in NXP who was laid off May 5.

Even as they protest what they brand as “illegal layoffs,” the unionists insisted that the main issue behind this layoff, and also behind the sudden sprouting of barbed wires around NXP, and the increase in security personnel watching over the movement of workers in and out of NXP to and from the industrial enclave’s gate, is the union’s wage hike demand in the latest collective bargaining negotiation with the company.

NXP Semiconductors Cabuyao Inc. produces and exports electronic parts used for armaments and RF devices, power devices in computers and in automotives. As one of the NXP’s test and assembly sites, which include those in Thailand and China, NXP Semiconductors supplies parts to Apple, Bosch, Continental, Delphi, Gemalto, Giesecke & Devrient, Huawei, Nokia, Siemens Network, Samsung and ZTE. Its global profits last year amounted to $4.82 billion. While Filipino unionists are campaigning for at least a 7-percent wage hike, their counterparts in Thailand have launched a sit-down strike.

Most NXP workers in the Philippines are college graduates. 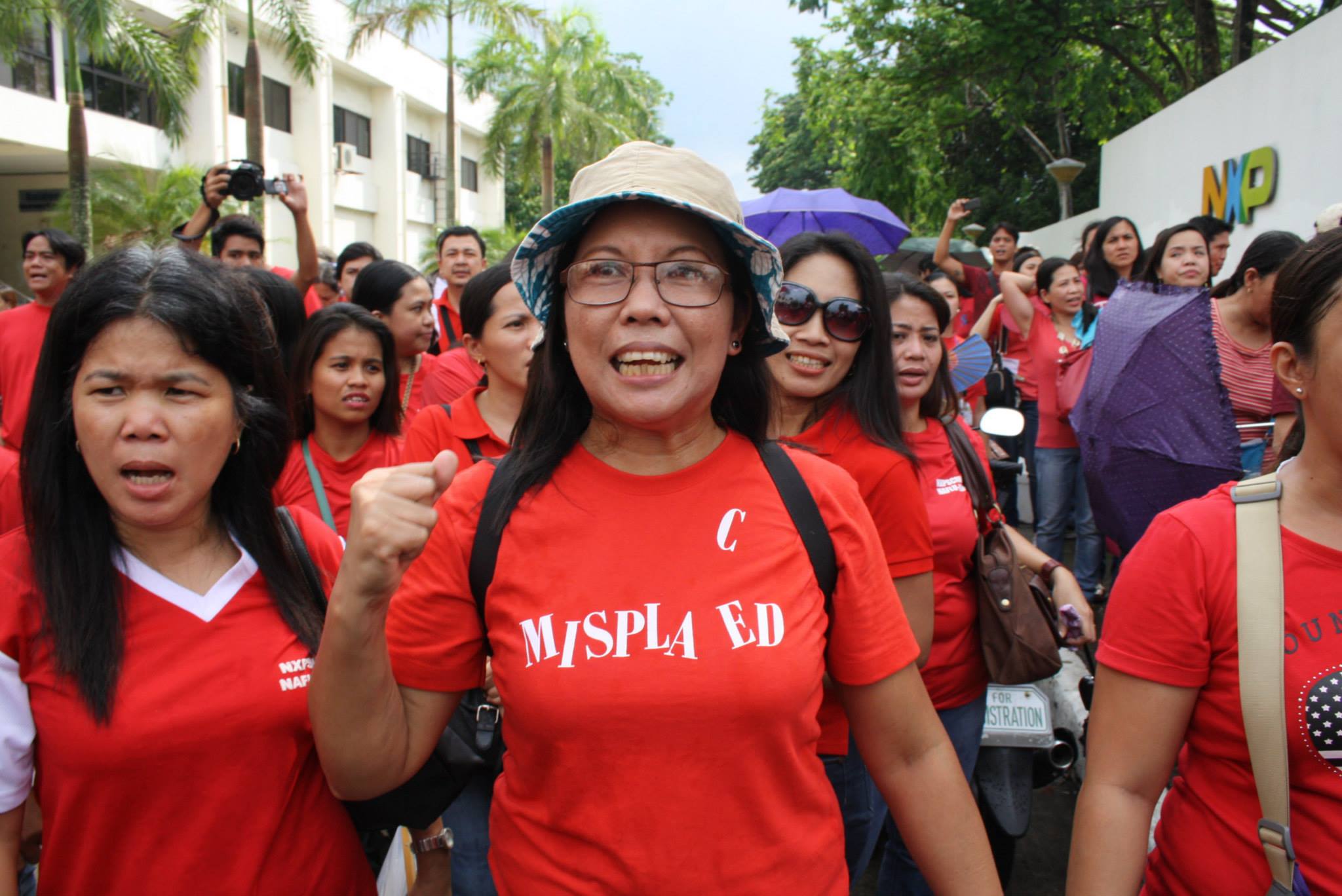 Oñate has worked in NXP for 18 years. She has three children, two are in school. Her husband also works in NXP. After she and her fellow union officers were terminated last May 5, she said, the management has been watching her husband carefully, doing what it could to remove the possibility that he could talk with other unionists. At one point, she said, the management wanted to provide a separate ride for him to and from work.

Despite her personal problem of suddenly finding herself jobless after nearly two decades in NXP, Oñate worries about the plight of her fellow NXP workers. Before being laid off, she worked as a “visual inspector” checking product quality before it goes to testing in quality control.

The union officers fear that the management is also out to deprive regular workers of their hard-won benefits.

Half of NXP’s 2,100 regular workforce are retirable next year, Oñate said. Three in every four will then have rendered 20 years of service. But following the “case” of illegal strike leveled against the union leaders, majority or some 1,590 workers who also did not work during the four legal holidays last April and on May 1 are now in danger also of being illegally terminated.

Majority of them are women with loans in Pag-ibig, the government-operated housing fund.

NXP has also beefed up the number of contractuals it hired since CBA negotiations began in January. From 590 to 700 contractuals working with the regulars, now it employs 2,000 contractuals, the union leaders said. One of the manpower suppliers came from an agency which President Benigno Noynoy Aquino III has visited when he went to Laguna, the unionists said.

The NXP, in an evident effort to prepare in case the union launches a strike, has been hurrying the training of contractuals in an atmosphere of intensifying repression, as more security personnel roam the workplace and the workers’ shuttle bus, the unionists noted.

The unionists suspect that the NXP and the government have a hand also in pressuring the nearby barangay to forbid the union from using its halls as meeting place. They held a meeting there after the officers were summarily laid off. Union president Reden Alcantara felt their moves being restricted even in the barangay.

In response, the workers have been holding noise barrages inside the workplace whenever they spotted the management. They have also tried their best to launch rallies inside and outside of the LISP, despite the beefed up security that tried to prevent them from communicating with the union leaders. They said they are also preparing to launch greater mass actions.

The 33-year old union of workers in NXP Semiconductors Cabuyao Inc. (it was formed when NXP was a Dutch-owned Philips Semiconductors) is in negotiation with the management for its 11th collective bargaining agreement (CBA). But after 23 talks from February to May this year, workers complained that the employers’ wage hike offer remains pegged at 3.5 percent, whereas the union has repeatedly slashed its proposal until it was down to 8 percent. (A 3.5 percent increase means P25; an 8 percent increase means P60.) Wage hikes in past CBA covering 2011 to 2013 were at seven percent.

“Our wage hike demands have basis because the company has been earning profits,” Reden Alcantara, union president, said at a conference in Quezon City last weekend.

Now the NXP Semiconductors Cabuyao, Inc. workers’ union (NXPSCIWU), an affiliate of KMU and a member of Metalworkers Association of the Philippines, is battling not just for their wage hike demand, but for the reinstatement also of their union officers, and for the return to normal operations in their workplace .

“NXPSCI’s violation of workers’ right to a CBA is continuing as it has just filed a motion to suspend negotiations, and has since then approached individual union members to ‘ratify’ the CBA it has proposed,” Labog of KMU said. He added that the NXP Semiconductors Cabuyao has recently frozen the union’s bank account, and filed cases against union leaders for having led protests in the plant.

Reden Alcantara, NXPSCI workers’ union president, told Bulatlat.com that behind their lay off is NXP’s “complete plan” to crush the union. He said the management “just took down the officers ahead of the others, to coerce the workers into submitting to management-decided wage levels, and to eventually replace the workers with cheaper-waged contractuals.

Alcantara noted that NXP Semiconductors Cabuyao only filed a case with the National Conciliation and Mediation Board citing the workers’ so-called illegal strike (not working on holidays), after it laid off 24 union leaders last May 5.

What the union finds most hurtful is the perceived collusion of government agencies with NXP management.

Alcantara said the administration of the economic enclave where NXP is located (LISP 1 in Cabuyao, Laguna) has had a hand in trying to suppress the union. “They have been documenting all our mass actions, when in the end, they plan to replace us with contractual workers.”

For the Labor Department to intervene in their labor dispute, the NXP management has filed a preventive mediation last April, Alcantara said. He said both the management and the union have agreed on some issues, but the workers rejected the 3.5 percent NXP-proposed wage hike.

Since then, the NXP management has publicly announced its willingness to come to an agreement with the union, but its attack on the union continues. For example, iIt has begun to hold in escrow the union funds since end of May, Alcantara said. NXP has also taken over the releasing of union’s Pabaon fund to resigning members, an activity in which it has no authority, said Alcantara. Perhaps to complete its trampling of the workers’ union rights, NXP has been approaching the workers individually to ratify the CBA, with the NXP-decreed wage rates. 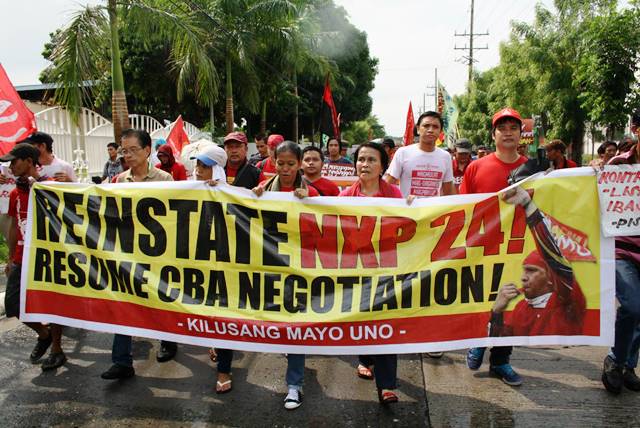 Meanwhile, NXP seems to be keeping its allegedly illegally terminated union leaders busy as new cases have been filed against them, following their series of protest action at LISP. Union leaders reported that certain groups of men have been going to where they live, harassing or doing surveillance on them. The LISP guards have also alleged that the union officers have harassed them, citing how the face of one of the guards was hit by the steel gates which the workers shook hard in an effort to open it during one of their rallies. This guard retaliated by throwing stones at the protesting workers, Alcantara told Bulatlat.com.

Last May 26, during a workers’ rally at LISP, firefighters’ hoses were used to blast the workers with water and drive them away from the gates. Some protesters grabbed the hose in defense. Now, at least five of the terminated union leaders are facing cases of slight physical injury resulting from their leadership in past protest actions.

“What we are seeing here is not just the violation of workers’ rights but the government’s collusion with big capitalists as shown in its inaction on labor disputes. The government is standing idly by as violations of trade-union rights continue to be committed,” said Labog of KMU.

Experiences like these show why the number of unionized workers and those covered by CBA’s, as well as the number of strikes, are on the decline, the labor leader said. It is not because of industrial peace, he said, referring to another of the Labor Secretary’s past “lies.” Instead, the shrinking unions and strikes are directly attributable to “intensified violations of workers’ rights being carried out by big capitalists and the Aquino government,” Labog said.

KMU urged Baldoz to directly address violations of workers’ trade-union rights, instead of lying about the real state of these rights.