A view of the presidency as an institution

CenPEG noted that President Aquino’s biggest backers saw their wealth increase three to four times as large as when his presidency started.

Gloria Macapagal-Arroyo, according to UP Professor Bobby Tuazon, was the replacement president whose entire term is best described as “a survival presidency.” During her nine years in power, her legitimacy was under question; scandals shredded her already low starting trust rating (just positive 20 percent) to a negative 50 percent by the time her disputed term ended.

Current President Benigno “Noynoy” Aquino who succeeded Arroyo vowed to be her opposite, and began his term with positive 67 percent trust rating. But going to his fifth year, his trust ratings have also gone down to just positive 25 percent this June, and he is already beset with impeachment raps.


As impeachment and ouster moves against the current president are up again, the same arguments against it, such as the complaint that every president is criticized and threatened with impeachment, are also being aired again. Why do Filipinos always end up in this rut?

At a recent political briefing analyzing four years of the Aquino presidency and what’s in store in the remaining two years, the Center for People Empowerment and Governance (CenPEG) in cooperation with Research for Extension & Development Office (CSWCD/UP) and UP Manila Political Science Committee proposed some answers. “It would help if we look at the presidency as an institution and not as a person,” said UP Prof. Bobby Tuazon, director for policy studies in CenPEG.

With such a lens, Aquino’s PDP (Philippine Development Plan), PPP (Public-Private Partnership) and DAP (Disbursement Acceleration Program), the hallmarks so far of what the economic thinktank Ibon described as “elite Aquinomics,” can easily be placed in the bigger picture of a continuing elitist economic policies implemented by this country’s succession of presidents. Ibon’s executive director and CenPEG Fellow, Sonny Africa, discussed Aquino’s elite economics in the same political briefing.

There are other acronyms embodying the peoples’ complained of lack of reforms and mere tokenism – CARPER (Comprehensive Agrarian Reform Program Extension with Reforms), for example, and CCTs (Conditional Cash Transfers), too, which Aquino continued and worsened – but as Ibon said, the PDP, PPP and DAP are the Aquino administration’s contributions to the list of post-Marcos presidents’ “reforms.”

Like past presidents who boasted of economic growth (CenPEG listed Ramos’ RP 2000 NIC-hood aspirations, and Arroyo’s “strong republic”), Aquino has also been boasting about “stellar” or “miraculous” growth. But in a presentation by Africa of Ibon, he said that Aquino’s vaunted rapid growth occurred in a still backward economy. Amid growing wealth especially of big businessmen and landlords, there is growing poverty, Africa said. Against data of record profits reported by top companies are data on record joblessness, he added.

Based on Africa’s presentation, the six percent average GDP growth under Aquino was registered amid declining manufacturing and agricultural output, and record unemployment and underemployent of 11.8 million people. Profits of top 1,000 companies rose 34 percent to P1.1 trillion ($25.16 B), and the wealth of the top 40 richest more than doubled, registering an increase of 116 percent to P2.7 trillion ($61.75 B) under Aquino. In contrast, working people in the capital received just two percent hike in wages.

Yet, Africa noted that the single fastest way of sharing even a minuscule amount of that vaunted growth with the people — through the P125 ($2.86) across-the-board wage hike – is consistently rebuffed by Aquino. (Arroyo had also consistently shot it down.)

Based on CenPEG briefing, what the Philippines has is “a dysfunctional political system” from the start, one that installs and gives huge power to presidents on the basis of his or her popularity, which he or she acquired by promising change or reforms. But presidents inevitably end up implementing no reforms, just tokens, while perpetrating grand-scale abuse of power.

According to CenPEG, the presidency in the Philippines as an institution has a strong power to either implement reforms or fight it.

Tuazon said the Philippine president is the world’s strongest, most powerful president of his or her country. He cited as proof its “executive hegemony,” or Philippine president’s ability to treat Congress as “rubber stamp,” and Aquino’s “siege” and disrespect of the judiciary. Tuazon said that the system of checks and balances between branches of government is compromised by patronage politics and pork.

CenPEG’s political briefing also noted the lack of genuine party system in politics, as political affiliations change with transactions for the politicians’ gain. With 170 very strong family dynasties today (of which 40 percent already existed under Marcos, and 60 percent started from the first Aquino presidency), “is there really a democratic restoration?” Tuazon asked.

CenPEG noted that President Aquino’s biggest backers saw their wealth increase three to four times as large as when his presidency started. He did not name names, but he pointed to the recorded increase in net worth of big business groups dominating Aquino’s projects. 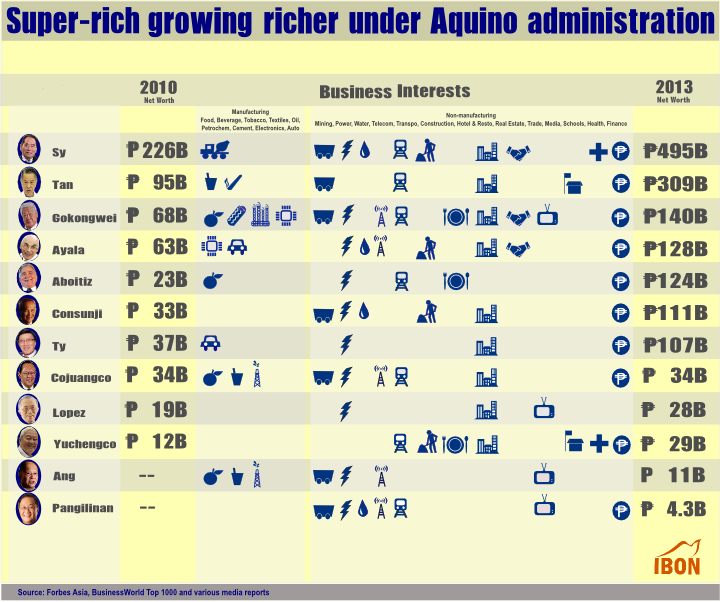 “Even partylist-system has been bastardized and subverted,” Tuazon said. Partylist system is supposed to be the chance of the marginalized to have their voices heard in Congress. But after the changes in interpretation of the partylist law, Tuazon said, more than half of partylist representatives in Congress today “can’t qualify as representatives of the poor.”

“Partylists have been infiltrated by political dynasties and multi-millionaires,” said Tuazon. The genuine partylists, meanwhile, have to contend with political persecution.

The doctrine of devolution is also far from being achieved in the Philippines, said Tuazon. The obstacles to genuine devolution, he said, include the “oligarchy, corruption and local government units’ lack of funds.”

In reaction to CenPEG’s briefing, Bayan Muna Partylist Rep. Carlos Zarate said that in Congress, indeed, lawmakers have been obedient to the president. “They do not even really probe into the president’s budget proposal,” he said.

Zarate agreed that the country needs huge, intensive reforms. For that to happen in this present system, he urges the public to take action. He said the public can put pressure on legislators and the executive.

Tuazon reiterated what he had written in a 2011 book, that “The present system’s lack of responsive social and economic reform as well as the hostility it has shown by using coercion and violence against social advocates who seek sweeping structural reform has forced massive numbers of people to seek change outside the mainstream elitist or bourgeois political processes.”

He warned though that the elite have been “resilient” at keeping power because it is defusing or diverting “those forces that are increasingly embracing other modalities and standing up against the state itself,” largely through token reforms such as the party-list system (which had been bastardized.)

Evaluating Aquino, the current president, Cenpeg chairman and UP Political Science Prof. Temario C. Rivera said that Aquino is inept and showing a disturbing trend of self-righteousness in responding to critics. In the DAP scandal, “it appears Aquino and his budget secretary deliberately sought to test and expand the limits of the law,“ said Rivera. He added we now know that much of the DAP was also used for patronage and for lump sum allocations for projects, personalities and places solely at the discretion of one or two men.

Aquino falls short of earlier expectations, according to Rivera. In sum, he said Aquino’s economic growth did not significantly affect poverty rates and unemployment; Aquino’s supposed anti-corruption policy centerpiece is “ironically confronted” by the country’s worst corruption scandal involving his closest allies, and his peace process in Mindanao “faces an uncertain endgame.”

So, what is in store for the remaining two years of Aquino? Dr. Ed Clemente, CenPEG Board member, concluded the briefing by sharing his experience. “I actively campaigned for Aquino presidency. From 2010 to 2011, I’m the only stupid person answering in behalf of this stupid president.”

He said he realized later, what can you expect really from someone like Aquino. “It’s really difficult for a haciendero president to feel the pulse of the toiling masses. You cannot put yourself in the shoes of the poor if you haven’t felt poverty. He appears insensitive, because he does not understand the difference between commuting by the crowded train and by bus.” Clemente referred to a recent issue when the president was faulted for insensitive remarks against protesters to his proposed hike in train fares.

Without change happening in this political system, the CenPEG fellows’ forecast is dismal. As Dr. Clemente noted, “If we’re all optimistic for next year (which is a pre-election year), there will be more of the same until 2016, when we hope again, and then for the first few years of the next president we’re hopeful as usual, and toward the middle or last quarter of the next president’s term it’s dismal as usual.”