Labor Day to be marked by protests by different workers’ groups 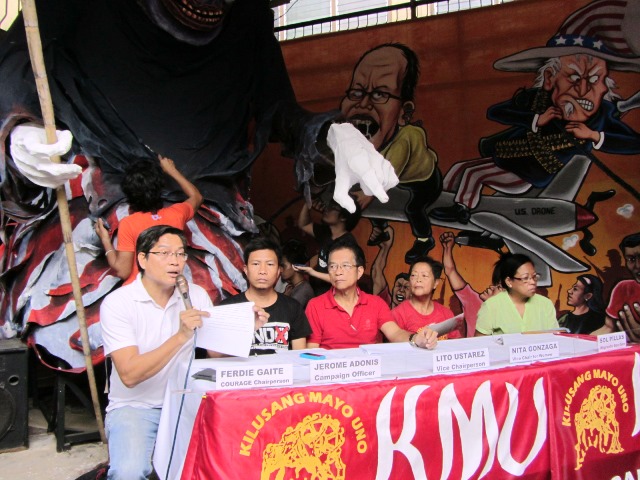 A mural depicting President Aquino and Uncle Sam in full battle gear aboard an airborne drone, besieged by protests, and a 12-foot effigy of Aquino as Commandeath-in-chief would be the main symbols of protest this May 1st.

MANILA – A day before Labor Day, the biggest labor groups in the Philippines expressed intense dissatisfaction with the Aquino government over the unresolved problems of joblessness, low wages and high prices.

The labor center Kilusang Mayo Uno and its regional chapters and allies are calling for Aquino’s resignation, citing his “crimes” to the Filipino workers and people. They said Mary Jane Veloso is just the latest addition to names designating his crimes. The others include the DAP (Disbursement Acceleration Program), Yolanda, and Mamasapano, said Lito Ustarez, KMU vice president.

Until now,he said, with just about 15 months left in Aquino’s term, no one has been charged or jailed yet from Aquino’s clique who have been implicated in allegations of plunder. “Many are LP members, KKK (kabarilan, kaklase, kaibigan) of Aquino,” Ustarez said.

The Trade Union Congress of the Philippines, meanwhile, said, in a separate statement, that it has terminated its plan to pursue its annual breakfast dialogue with Aquino. They said it is an expression of their “collective frustration” at President Aquino’s failure to initiate policy reforms toward addressing the deepening poverty and widening inequality in the country. TUCP said it will also hold a protest Labor Day parade from España to Mendiola.

The KMU will converge in five points in Metro Manila on Labor Day – in UST at España, Quirino, Blumentritt-Avenida, Pureza along Aurora Blvd., and Moriones in Tondo – at 11 a.m., before proceeding to Liwasang Bonifacio at around 1 p.m.

KMU’s campaign officer, Jerome Adonis, said they will hold a program at Liwasang Bonifacio before marching to Mendiola at around 3 p.m., where they will conclude their Labor Day protest. 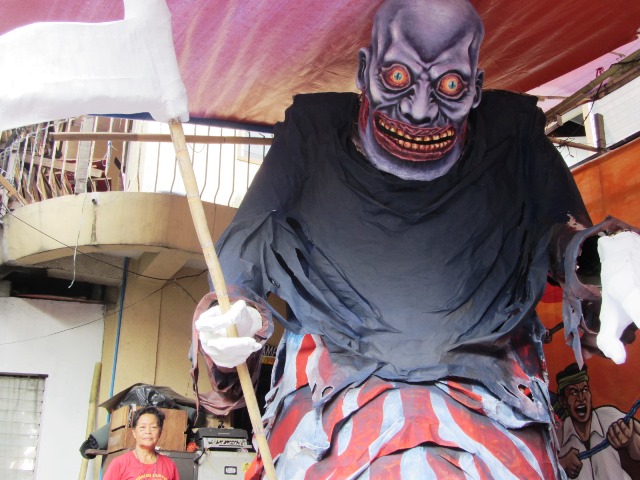 The KMU leaders unveiled the mural that will serve as backdrop to their May 1 program in Liwasang Bonifacio and Mendiola. The mural depicts President Aquino and Uncle Sam, in full battle gear aboard an airborne drone, besieged by protests.

Adonis also presented the 12-foot effigy of Aquino as Commandeath-in-chief. He said in Filipino that with the effigy and the mural, they want to show how President Aquino is the “main promoter of tragedies befalling Filipinos and the Moro people.” Their statement said the effigy also shows Aquino’s accountability for the death of many Filipinos.

“We are calling on all workers and Filipinos to join our Labor Day protests and show anger at Aquino’s anti-worker and anti-people presidency,” Ustarez said. He added that Aquino’s continued rule “poses immediate danger to the livelihood, rights and lives of the Filipino workers and people.”

He recalled Aquino’s “negligence at providing social services, the pervasiveness of low wages and joblessness, and why Filipinos are forced to work overseas, resulting in cases like Mary Jane.

Nenita Gonzales, KMU vice president for women, recalled that May 1 as Labor Day came to be as the working class struggled for an eight-hour labor day – but in the Philippines today, reports reaching KMU from its regional chapters say workers are being made to work for up to 12 or 14 hours a day.

Difficult though it may be, she urged all workers to form a union, saying that with a union, they could hope to wage a stronger struggle for improved work conditions, wages, and political rights.

The KMU leaders called on workers to join or support the growing expressions of outrage at the Aquino regime, for its “consistent effort to bring down wages and turn the employed into contractuals with little to no benefits.”

The KMU leaders plan to burn the 12-foot Commandeath-in-chief effigy of Pres. Aquino at Mendiola toward the conclusion of their Labor Day protest.