There has been no update, no feedback, no nothing about their case.

MANILA – More Kentex workers and family members of Kentex fire victims trooped to the Office of the Ombudsman Wednesday, June 22, to bolster the demand for investigation and justice filed last month by their fellow Kentex survivors.

“More of us are now urging the Ombudsman to investigate the top officials of Department of Labor and Employment, Bureau of Fire Protection and Department of Interior and Local Government toward filing cases of reckless imprudence resulting in homicide and physical injury and negligence of duty,” said Ammied Rada, coordinator of Justice for Kentex Workers Alliance.

Among the survivors and family members who came was Rosemarie Magracia, 53, who lost her second daughter, Ma. Precilla “Mharky” Crenshaw, in the Kentex factory fire last May.

Her daughter Mharky would have survived the blaze, she had been told before. But she learned the circumstances surrounding it only that Wednesday — how Mharky climbed back up the stairs when she heard that her friend, Carla, who was pregnant, had fainted.

The explosion occurred after she got back to the second floor, but, like many others, she failed to come back down again. The fire spread quickly after the explosion.

Magracia heard about her daughter from another grieving mother of another victim of Kentex fire, who joined the second batch of Kentex survivors in filing cases at the Ombudsman.

Anita Tejada, 47, is a manicurist who sometimes also does laundry to augment her income. She is frequently the breadwinner in the family as her husband is often jobless.

Her only daughter, seeing her hardship, promised to help her as soon as she can. So, after graduating from high school in Mapulang Lupa, Valenzuela, Carla immediately worked at compiling the paper requirements she needed to work as soon as she turned 18. 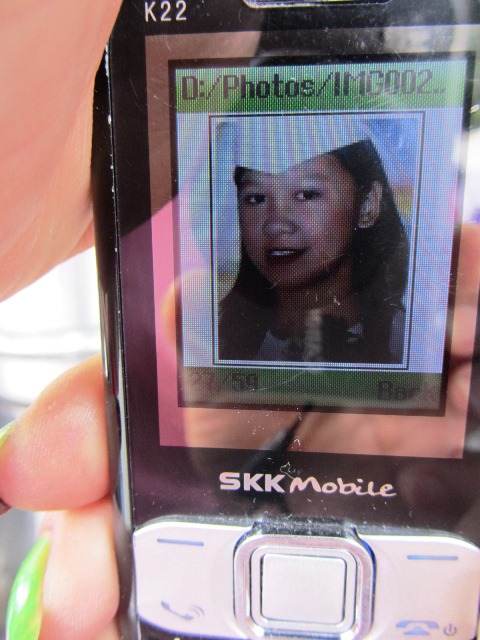 A photo of Carla Tejada from her mom’s cellphone.

Carla Tejada was 19 years old when she died in the Kentex factory fire last May 13. She had worked for just over a year in Kentex, her first job. As her fellow victims, she was a contractual paid just P202 ($4.45) per day, below the P481 ($10.60) minimum wage rate in the capital.

Carla was eight-month pregnant and that was why survivors said most workers in Kentex had sought to protect her during the fire, along with another pregnant coworker. Her body was found with Crenshaw.

Carla’s mother said the two had protected Carla’s womb, as it was hardly burned, but the baby still died with a bruise on the knee.

Anita Tejada shared how her daughter had managed to call her, around 10:30 morning of May 13, to tell them: “Ma, Pa, Kentex is burning and we can’t go out.”

They did not have to die

Anita Tejada said she and her husband dropped everything and went to the burning factory but they couldn’t go near it. Aside from the crowd control, the smell of the smoke and chemicals was overpowering, she said.

“Help us, we’re dying here,” she kept remembering her daughter begging them on the phone.

“But we couldn’t do anything,” cried her mother.

Two months after the blaze, she and other family members and survivors have to troop to the Office of the Ombudsman with another batch to pressure the authorities for action in their case. They want justice and changes so work ‘accidents’ and fatal fires like in Kentex will not happen again.


Rada, spokesperson of Kentex Workers Alliance, said the Kentex survivors are hoping to dispel the notion which the owners of Kentex Manufacturing Corp. have been trying to spread around about the workers supposedly stopping their demands for justice in exchange for some amount of settlement. “Those accountable should be held to account for the Kentex fire,” Rada reiterated.

Despite the fire that shocked many two months ago, including the revelations about their dismal labor conditions, the same things continue to happen as before in other establishments.

Nestor Puro, 26, a contractual machine operator in Kentex for two years, another survivor who joined the second batch in filing cases at the Office of the Ombudsman, has found a job which he and other former delivery crew of Kentex described as “precarious” and part-time.

They are now under another agency supplying a soda drink company with workers. They have a yellow uniform, but everyday, they may have a job or not, despite coming to the workplace at 5 a.m. and waiting for a job for until 12 noon. As part of the delivery crew, they get a job for the day if a delivery truck would need them. They would then earn P481 ($10.60), the minimum wage, for a job from 5 a.m. till 8 or 9 p.m. Puro estimated that there are 100 like them in that soda company.

A machine operator in Kentex for two years, Puro survived the Kentex factory fire last May 13 because, when he was about to go with the rest of the workers toward the back of the building, thinking there would be an exit or rescue there, a friend stopped him. They decided to brave jumping instead to the ground floor and the street in front of the building, where their main entrance was, and where the fire had started.

Closing his eyes, he said, he jumped, indeed. Lucky for them, there was a parked closed van for delivery right below where they jumped which broke their fall. Puro survived with three others who jumped, including a supervisor and a woman worker who sustained a sprain.

“Downstairs, we still heard their shouts for help,” Puro recalled. It was around 11 a.m. after they jumped. They heard the cries for help until 11:30 a.m. One of his in-laws died in the fire, Puro said.

He joined 28 Kentex survivors and family members at the Office of the Ombudsman to file their case against the authorities who should have ensured Kentex was truly compliant with fire and safety requirements, and occupational health and safety.

During their picket, they reminded the Office of the Ombudsman that up to 73 workers would not have lost their lives that day if there had been a fire exit, and if the firefighters had arrived quicker than the reported two hours delay that day.

Most of the Kentex workers interviewed by Bulatlat.com said they have never experienced how it is to be a regular worker not just in Kentex but in all the other jobs they have had before, in the capital or in other provinces. 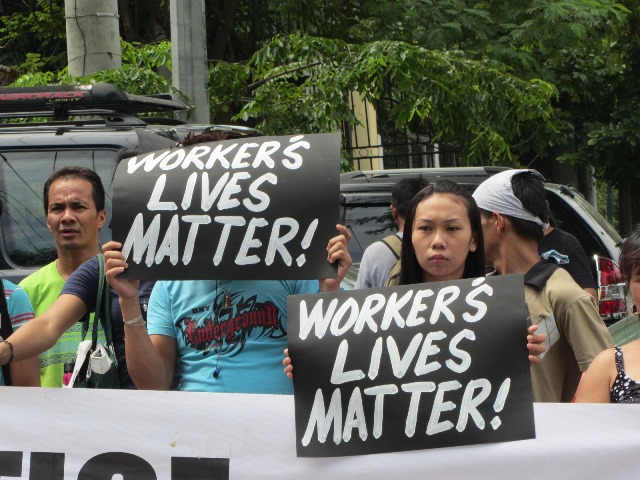 Until today, more than two months after the Kentex factory fire that killed 73 (or 74), the owners and the agency that employ the workers – which were found to have been violating labor standards, occupational health and safety standards, and the government’s prescribed fire and safety requirements – have not yet been made to account for it, said the workers.

Although Kentex and CJC had been ordered last July 1 in the National Labor and Relations Commission (NLRC) to settle with the workers their violation of labor standards, such as the non-payment of minimum wages, the order has yet to be executed. In a separate labor forum this week, Jobert Canillo, spokesperson of Justice for Kentex Workers, told Bulatlat.com that CJC, which was registered in Bulacan and is under the Labor Department in Region 3, was ordered to pay the workers P8.4 million ($185,163); Kentex was ordered to pay up to P1.4 million ($30,860), for their violations such as not paying the workers the minimum wage, not paying the workers holiday pay, and withholding benefits. CJC also reportedly owed each worker for the weekly “illegal deduction” of P100 ($2.20) for some “cash bond.”

As with other labor cases, Carillo said Kentex might appeal the decision and thus further delay the execution of the NLRC order.

Also, the top officials of the Department of Labor and Employment, Bureau of Fire Protection and Department of Interior and Local Government, they noted, are just carrying on as before, without any case so far filed against them, or a probe for their negligence. Meanwhile, they said, other workers are dying in other workplaces, and the jobs there are continue to be under various modes of low-paying, insecure contractual or non-regular employment.