“The workers are continuing his fight for just wages and decent jobs.”

MANILA – Striking workers of Tanduay Distillers stormed the tall steel Gate 2 of the company’s plant in Cabuyao, Laguna early this morning September 22. Their repeat attempt before 5 p.m. was blocked by policemen from Cabuyao, who even fired two shots while the workers’ march was violently being dispersed by Tanduay security guards. One police officer warned the workers with his armalite.

The striking workers are picketing the Tanduay gate to press Tanduay Distillers Inc. to regularize long-standing contractual workers, as the country’s labor laws prescribed and as the Labor department had twice ordered it to do. The workers launched their strike since four months ago for this demand for regularization.


There is only one regular in every five workers in all three plants of Tanduay Distillers in the Philippines, based on the company’s report to the Securities and Exchange Commission in 2013. In its Cabuyao, Laguna plant, where the strike is ongoing, the involved workers have been at work from more than a year to 10 years, yet they remained as contractuals.

“We are assigned with job designations such as machine operator, maintenance personnel, and others, which are all necessary and desirable to the operation of Tanduay,” said said Anse Are, president of TUDLA (Tanggulan, Ugnayan at Daluyang Lakas ng Anakpawis sa Tanduay Distillery).

On June 22, the Department of Labor and Employment (DoLE) Region IV-A office issued an order directing Tanduay Distillers Inc. to regularize the striking contractual workers. The company countered by filing an Appeal to Dismiss at the Office of the Secretary (OS), DoLE national office.

Meanwhile, the two cooperatives, Global Pro and HD Manpower, which supply labor to the company and introduce themselves as the employers of the Tanduay workers, separately filed a Motion for Reconsideration.

On August 25, the Office of the Secretary (OS), DoLE national office, issued a decision affirming its regional office’s order. In an 11-page document, it re-examined the arguments of the workers, company and cooperatives, and concluded that the Global Pro and HD Manpower are labor-only contracting agencies.

In a statement, TUDLA said the decision of the DOLE’s Office of the Secretary also “emphasized that the striking contractual workers are regular and should be regularized by the company.”

Under the Labor Department Order No. 18-A Series of 2011, labor-only contracting is illegal.

In fighting for their regularization, the strikers said they are just demanding for what is “rightfully” theirs. “Yearly, we create products that bring in billions of profit for the company and its owners, which include Lucio Tan. He has gained so much from us,” Are insisted. He reiterated their group’s vow to continue with their strike. “We are regular workers of Tanduay and we will fight for it.”


The strikers’ effort to picket Gate 2 of Tanduay, where they have repeatedly been beaten and shoved by armed guards hired by Tanduay, coincided with the 10th death anniversary of Diosdado “Ka Fort” Fortuna. The latter was former union president of Nestlé. He was killed at the height of their union’s campaign for wage increase and retirement benefits.

Are said their picket is one way of saying that on Fortuna’s death anniversary, “the workers are continuing his fight for just wages and decent jobs.” He added that contractual workers from Tanduay and other factories are committed to intensifying the fight against contractualization.

Tanduay strikers and contractuals from other factories in Laguna held a program commemorating Fortuna in front of Nestlé’s core factory in Cabuyao, before they marched to Tanduay late afternoon, Sept. 22. But as they neared Gate 2 of Asia Brewery Complex, the marchers in front were “greeted” with rocks thrown by the company’s security guards. An Asia Brewery firetruck blasted them with water. Meanwhile, the protesters at the rear were reportedly forced to defend themselves from a police vehicle which tried to run them over.

Pamantik-KMU posted in their social networking site that the police did not stop but merely watched the attack on the workers by Tanduay “goons and guards.” 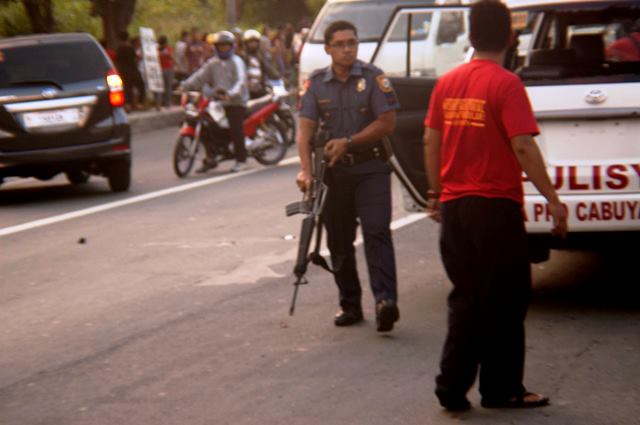 The marchers pressed ahead and managed to hold a program in front of Tanduay Distillers’ Gate 2. But an hour and a half later, shortly after concluding their program, Anse Are said Tanduay “goons” restarted throwing rocks at the workers and the firetruck blasted them with water again. For the second time (the first was in August), their picketline’s tent and makeshift quarters beside the gate were also smashed by Tanduay’s “goons.”

Tanduay’s union of contractual workers still has to report how many were hurt in this latest attack. Are said they were still gathered together in case the attacks resume. They reiterated their appeal to the public to boycott Tanduay products.