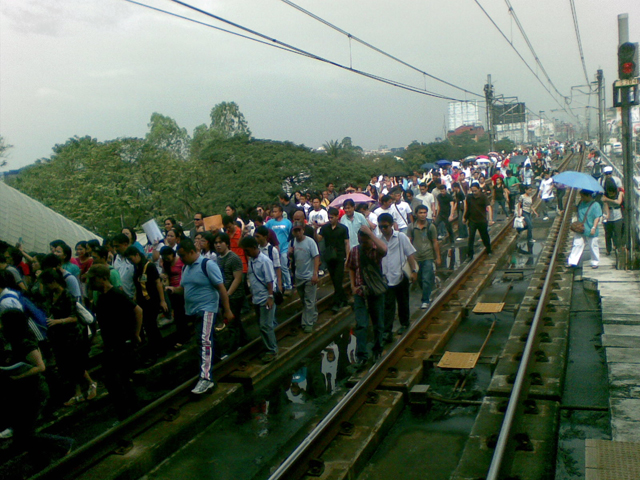 “Developing the country’s national industries to provide the fuel, energy, metal, and heavy equipment requirements of mass transport is key in planning an efficient, quality, and environment-friendly mass transport.”

In their roadmap, six private rail expansion projects, two bus rapid transit systems, three integrated terminals, and a ferry service will be set up as part of a long-term mass transport development plan. It will cost P940 billion.

But the said roadmap is in itself just a part of the administration’s big-ticket public-private partnership projects or PPPs, said the scientist group AGHAM (Advocates of Science and Technology for the People) on the occasion of the World Climate Action Day initiated by the International Transport Workers’ Federation on October 6.

While most people demand today the easing of traffic congestion in the metropolis, there is no guarantee it will be resolved with the roadmap, according to critics. Worse, through this roadmap the national government is placing the public mass transport system, an essential social service, “under the mercy of profit-hungry private corporations,” said engineer Miguel Aljibe of AGHAM.

It is under this program that LRT1, LRT2 and MRT fares have increased by 50 percent, 66 percent and 87 percent, respectively, since nine months ago. Aljibe and an Ibon research said this translates to a 138 percent increase in transportation expenses of minimum wage earners. If these train systems were being run for public service, and not profit, the said fare hike would likely not be imposed, because data showed that the said trains can get by on its earnings from old fares.

In fact, the experience of LRT 1 under a government agency showed it could be run efficiently and it could have managed its own rehabilitation and further expansion by itself, under the old fares. (The LRT was built mainly through foreign loans but without a private group acquiring it in the name of the Philippine government. The LRT was thus run for decades more for public service and loan repayment, than for profit. It has successfully repaid its loans and has even expanded to build LRT-2. But the next phases of its planned expansion, as well as the operation of current systems, were privatized last year by the Aquino government.)

Not only is privatization costly to commuters and to public funds, Aljibe reminded the public that “our experience with the current privatized urban rail setup has shown it is unsafe for the riding public.” He blamed management failure for the increasing number of breakdowns and glitches in our trains since 2013. Similar to the observations shared by MRT employees with Bulatlat.com, the engineer said lack of proper maintenance has made the trains unstable.

As if these were not enough, public convenience is also taking a back seat for profit motives in the PPP-driven transport plan. Aljibe blamed the PPP’s seeming thrust for profit first before public convenience/interest as the reason why there are competing “common” stations – one near two different malls in Cubao and another two to be built near different malls along North Avenue.

This runs counter to what should have been the foremost concern of any systematic plan for mass transportation — the requirement to place the needs of the riding public first and foremost, said Aljibe.

“Decisions regarding the development of roadways, ports, train stations, airports, and integrated terminals should be done under the principle of maximizing social and environmental benefits. The development of different modes of mass transport – from tricycles, jeepneys, and buses, to trains, boats, and aircraft, should be in line with the needs of the national economy and the Filipino people, not of private corporate interests,” he explained.

AGHAM projected that in this kind of transport system within a real industrialization drive, Filipinos would be using local resources and producing goods based on actual domestic needs and demands, which, in turn, would drastically reduce the waste and pollution from overproduction. It also calls for supporting local research and development to allow local companies to build quality and environment-friendly mass transport vehicles and infrastructure.

In Davao last week, a Filipino inventor, architect Jose Guardo, Jr., presented the Filipino’s version of the maglev train (magnetic levitation first used in Japan and Germany) which is cheaper than that of Germany, costing US$40.9 million per kilometer of the rail.

Before this, there have been other Filipino inventions for cost-efficient or at least fuel-efficient vehicles, but most floundered for lack of government support.

Nationalization of our industries presents a historically sound strategy for easing the transportation woes of the Philippines, Aljibe of AGHAM said. He added that it will decongest the urban populace, encourage the development of public mass transport, and reduce greenhouse gas emissions.

“Moving forward entails that the public, through its government, take full possession of our trains, as a step toward a genuinely public mass transport system,” Aljibe concluded.