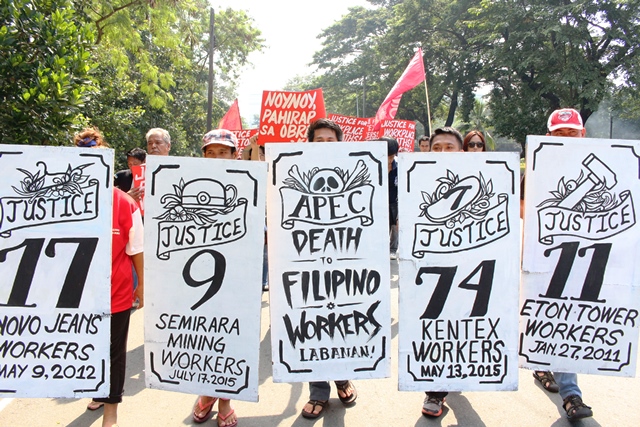 MANILA – On the occasion of All Saints’ Day, workers led by national labor center Kilusang Mayo Uno picketed in front of the Labor Department’s main office in Intramuros, Manila as they mourn the death of fellow workers in workplace accidents. They have been demanding better working conditions and strong actions from the labor department to achieve this. 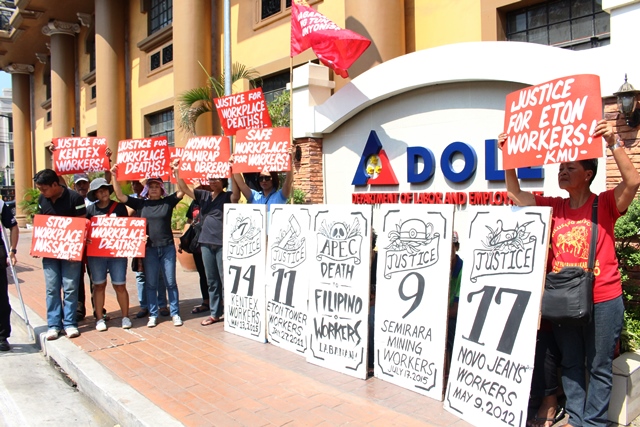 The labor group also warned of “gradual death” coming to workers in relation to the upcoming Asia-Pacific Economic Cooperation Summit this November. They forecast that the decisions likely to be made in the summit would mean lower wages, widespread contractualization, rampant violations of workers’ rights.

“We remember and mourn our fellow workers who died in the workplace. We continue to cry for justice for them. Their deaths compel us to fight for better working conditions for all Filipino workers,” said Jerome Adonis, KMU secretary-general. 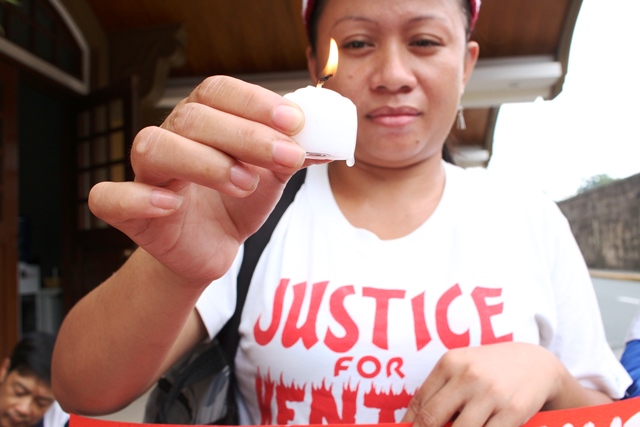 Yet, the upcoming APEC poses further threats to workers in this country and the Asia-Pacific region, the labor leader said. He said that in the guise of “attracting foreign investors” to “developing countries” like the Philippines, governments will further undermine existing laws and create new ones that would allow big capitalists to increase profits by making working conditions worse.

“Since the last APEC Summit in the Philippines in 1996, wages have been pressed down, contractualization has spread, violations of workers’ rights have become more rampant, and more workers have died in workplace accidents,” Adonis added.

KMU reiterated its call for a significant wage increase in the form of a P125 across-the-board wage hike nationwide to make up for the meager wage adjustments that were approved by the country’s regional wage boards over the past decades.

The labor center said this amount is merely for “immediate relief,” just to hold back the workers from stepping closer to death.