You Are Here: Home → 2016 → February → 7 → #15YearsofBulatlat | ‘Kulang sa libog’ and other facts you need to know about the early days of Bulatlat 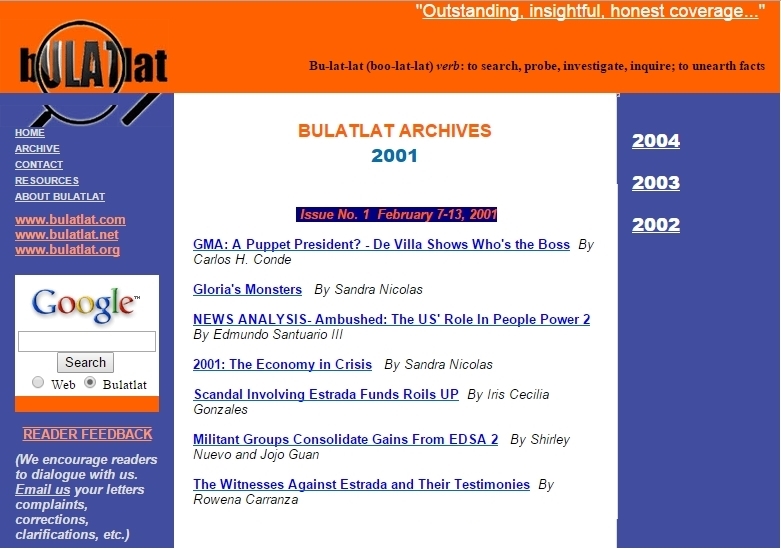 Weekly publication
Bulatlat was originally a weekly online news magazine. During the first months, reports were published on Wednesdays. But after its seventh issue, the editorial team decided to move the editing of stories to Friday and the uploading on Saturdays, and occasionally on Sundays simply because writers could not meet the deadline.

The uploading was moved to Friday to increase the chances of reports to be reprinted over the weekend or the following Monday.

Today, Bulatlat is a daily news magazine. It publishes both breaking reports and in-depth news features.

A newsletter
The founding editors of Bulatlat originally wanted to come up with a six to eight-page newsletter, not a news website. But they later on agreed to explore the new media platform — the information highway, they called it — due to limited budget.

‘Kulang sa libog’
During the first six months of Bulatlat, its editorial team said that while the content has been substantial and meaningful, the writing style and the range of topics have tended to be “dry” or “kulang sa libog.” One of the recommendations to specifically address the “libog” was to publish “tsismis” or “blind items.”

Sans the craze of social media sites today, Bulatlat editorial team used Yahoogroups to send out reports back in early 2001. Email subscribers initially served as a gauge on its reach and diversity of its readers. Three months later, Bulatlat had 147 email subscribers.

Today, Bulatlat attempts to fully maximize social networking sites as a vehicle to reach out to its intended readers. Readers accessing Bulatlat through Facebook or Twitter has been steadily rising in recent years.

OFWs through and through
Apart from dominant media and other news websites at the time of Bulatlat’s founding, the reports were also being reprinted in many Filipino newspapers abroad, such as in Spain and Belgium, mostly members of Migrante International, a Filipino migrant rights group.

Today, countries who have a high number of OFWs remain as top locations of Bulatlat readers.

Blue and orange
One of the founding editors and currently Ibon Foundation executive director Jose Enrique Africa said a friend from the advertising company suggested the colors Blue and Orange for Bulatlat. These colors are supposedly the “friendliest” in the spectrum of colors.

‘Two computers’
Bulatlat founding editors bought two computers with a 10-gigabyte hard drive each. Africa said they thought they were already “splurging” and were “awed” at the speed of their computer. Today, of course, a flash drive’s memory is way bigger than that.

First anniversary ‘splurge’
It seems that being thrifty runs in the blood. On Bulatlat’s first anniversary, its editorial team decided to buy much-needed cabinets and coffee supply than hold a party. In fact, year in and year out, Bulatlat’s anniversary seems to pass just like any other press work.

It is a no-brainer that there will be no party this year. Sorry, guys.