“By its refusal to implement safeguards, Comelec itself is the one undermining the credibility of the election results.”

MANILA – The first public protest over the Comelec’s refusal to print voter receipts was held today, Tuesday, March 15, in front of the Comelec’s national headquarters at Intramuros, Manila. Led by the election watchdog Kontra Daya, the group strongly urged the poll body to abide by the election law and implement its order regarding the printing of the verifiable paper audit trail. Policemen barred the group from coming near the doors of the Comelec. 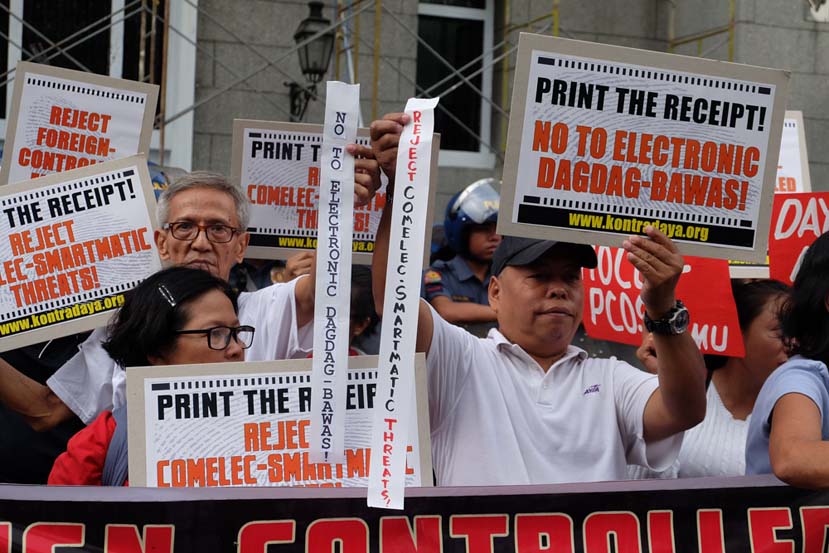 ‘The Comelec must implement not just the printing of the verifiable paper trail but also other necessary safeguards,” said Kontra Daya convenor Prof. Danilo Arao.

The automated election law requires the printing of a verifiable paper trail. But, according to Kontra Daya, the Comelec has violated it twice already – the Comelec neither printed voter’s receipts in the 2010 elections nor in the 2013 elections. Both had been marked by controversies as voters and candidates confronted the lack of transparency in the counting of results, and the various discrepancies that remain unanswered today.

“Such an argument is not acceptable,” Arao said. He added that the Comelec is exhibiting a big weakness but it should not play around with the law or the fundamental issue of transparency.

“By its refusal to implement safeguards, Comelec itself is the one undermining the credibility of the election results,” Arao said. Kontra Daya describes these acts of Comelec as “sinister.”

The group cautioned the public to not fall into the trap of pitting automated elections against manual elections, stressing that what we all want is a clean election.

It called on all political parties to reject Comelec’s threats and instead support calls for transparency in the elections. Kontra Daya said a delay in the elections will only benefit the incumbent, who they are sure will only further avail of the resources of the government for their electoral advantage.