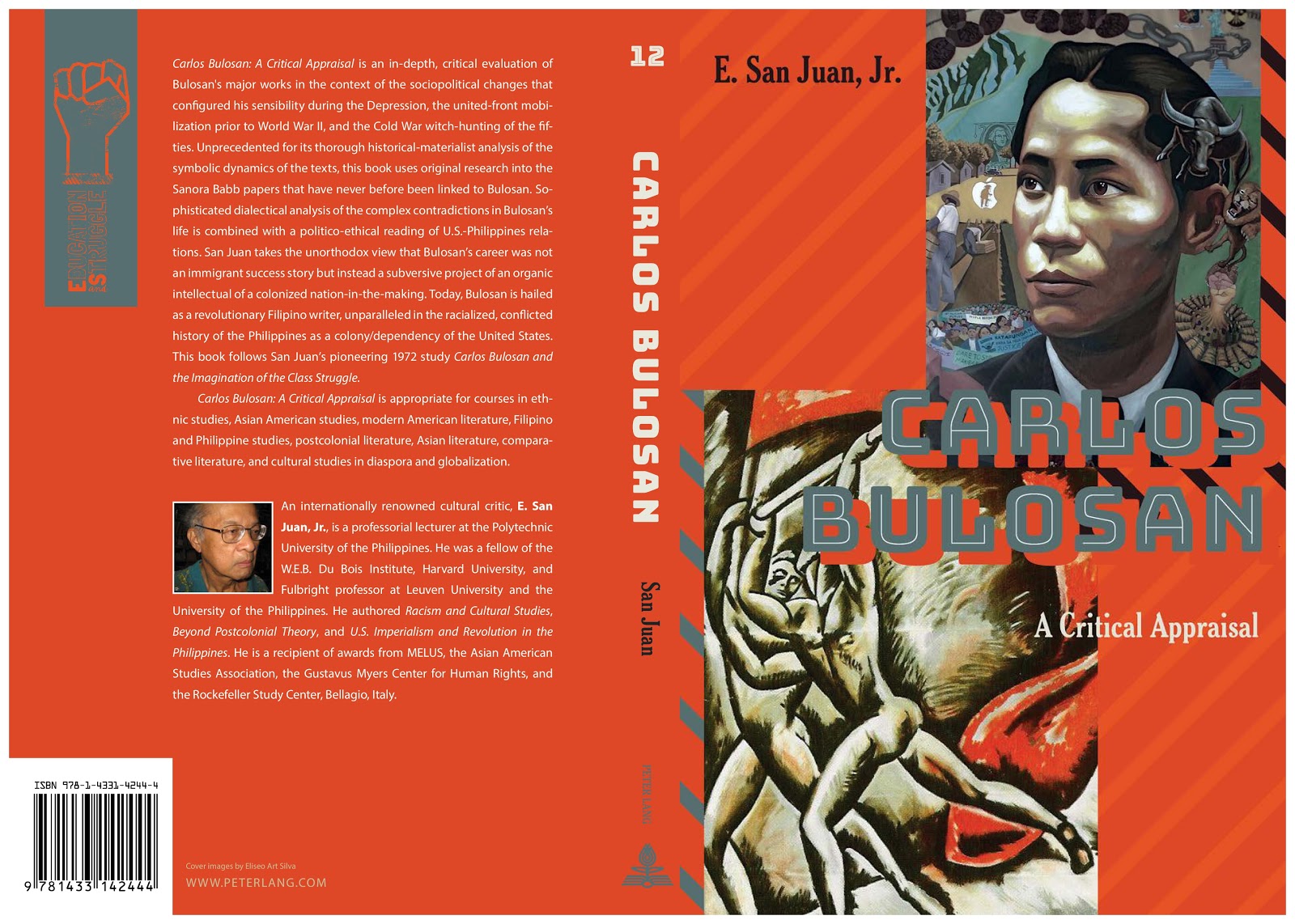 Carlos Bulosan: Revolutionary Writer in the United States is part of a project destined for the world’s libraries of the 21st Century. With its colorful cover and solid binding, it has the number 12 on the spine, indicating its sequence in the multi-volume project: Narrative, Dialogue, and the Political Production of Meaning, co-edited by Michael Peters and Peter McLaren.

The project underscores the importance of language that enables discourse and produces meaning. It is well to recall that when the Founding Fathers altered the tripartite goal of “life, liberty, and property” to “life, liberty, and the pursuit of happiness,” the “meaning” of America was born and, along with it, the ideology of a monotheistic Deity.

E. San Juan’s Carlos Bulosan exemplifies the guiding philosophy of the series. Co-editor McLaren considers him “one of the leading public intellectuals of the United States,” and his engagement with Bulosan “magisterial” (p. xiii). McLaren reaffirms the contemporary relevance of Bulosan, “now a central figure in Asian America history,” and the “need to recover the submerged insurrectionary impulses in Bulosan’s discourse” (p. xi). San Juan attempts to fulfill that need in this “Critical Appraisal.”

San Juan distills the research and commentaries on the revolutionary writer, and presents his observations in sections or essays with catchy titles, e.g. “Point Counterpoint: Retrospective Beginning,” and “Witnessing Swerve.” Each essay produces a meaning or knowledge that serves to correct misguided or uninformed opinions, and initiate further discourse that, in turn, may produce more meanings. Take for example the entry “The Plagiarism Perplex,” (68) a topic that interests me. From this article, I can design “a great chain of reading,” (The New Yorker, 16 October ’17, p. 79), and link Bulosan to luminaries, such as Wallace Stegner and Martin Luther King, also touched by the same issue.

San Juan is most responsible for Bulosan’s canonization, the inclusion of his oeuvre in required readings in colleges and universities, e.g., The Heath Anthology of American Literature (2004). America is in the Heart, however, has been a staple of Asian American and Philippine Studies worldwide. San Juan accepts “blame” for starting the Bulosan trend (industry?) with his first book on him in 1972, and co-editing, with Russell Leong, an issue of Amerasia Journal (May 1979) devoted to Bulosan.

I owe San Juan a debt of gratitude for enlightening my colonial mentality. In the anthology, Sabong: Stories, Etc. (2015), and in the forthcoming “Spots of Time: Memoir of a Mind,” I document my evolving (self-knowledge of having a colonial or post-colonial mind-set. In May 1977, I published “From Colonial to Beleaguered Mentality: Busing and the Filipino American,” and in October 2012, I presented a paper at the Michigan State University Conference on Philippine Studies, entitled “The Diplopic Consciousness of Overseas Filipino Writers.”

I commend San Juan for re-visiting Carlos Bulosan, especially to colleagues and institutions in the Philippines with preconceived labels, e.g., “Marxist,” or “Socialist.” NVM Gonzalez once told me that he did not understand San Juan. If NVM read this book now, I’m quite sure he’d change his mind. (He died in November 1999.) The prose is as lucid as the best of NVM’s, and the logic much persuasive. To quote myself, “San Juan writes poetry in Filipino and polemics in English. He has the sensibility of a poet and the driving logic of a committed polemicist” (Sabong, 166).