MANILA — An organizer of transport group Piston and staff of Kilusang Mayo Uno was arrested this morning near his home in San Mateo, Rizal.

In a statement, KMU said Marklen Maojo Maga, 39, was “abducted” by policemen in plainclothes at around 8:40 a.m. today in San Mateo, Rizal. He had just brought his son to school. But his family and lawyers only got confirmation that he is being held at the Philippine National Police-Criminal Investigation and Detection Group compound in Camp Crame by evening. 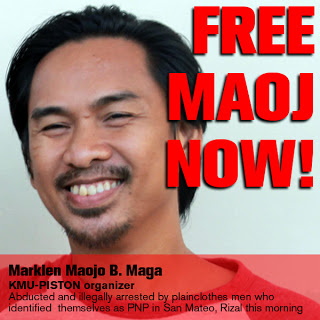 organizes workers in the port areas and in factories in Valenzuela and Central Luzon. KMU said he has also helped to organize the transport workers and that he helped out during Piston’s national protest last Feb. 19.

Before joining the trade union movement, Maga was a student leader. He was one of the founding members of Anakbayan.

Maga’s arrest closely followed the arrest and detention of his father-in-law Rafael Baylosis, a peace consultant of the National Democratic Front of the Philippines (NDFP), last Jan. 31 in Quezon City.

KMU holds the Duterte regime “responsible for the abduction and illegal arrest of Maga.”

“This is part of his fentanyl-driven rampage against critics of his fascist and oppressive rule,” the KMU stated. Last month, on January 29, the KMU-Southern Mindanao Region also condemned the Armed Forces of the Philippines for “harassing and threatening workers’ communities in Compostela Valley. The state military reportedly presented some banana plantation unionists as New People’s Army rebel returnees.” The government employees have also been sounding the alarm over repeated threats against their unionists and organizers.

Under Duterte, rights groups documented that 22 union leaders and workers have been killed.

The KMU has yet to learn what charges, if any, will be filed against their organizer.