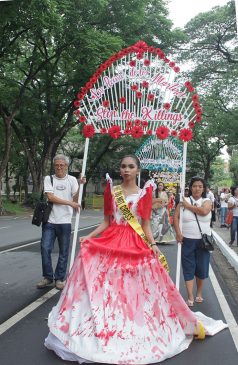 The organizers and designers lamented how Flores de Mayo has been treated as beauty pageants these days and they wanted to show a deeper meaning to the tradition.

MANILA — Deborah Escudero was teary-eyed as she narrated how her 18-year-old brother Ephraim ended up as one of the victims of Duterte’s bloody campaign against illegal drugs.

Wearing a dress splattered with red paint, which resembles bloodstains and a yellow sash with the text, “Police Line Do Not Cross,” Deborah said that resorting to extrajudicial killings is not the solution to the drug problem.

Her brother left their house in San Pedro, Laguna on Sept. 19, 2017 and did not come home that night. Two days later, the family found Ephraim’s body in Pampanga. The police in San Pedro ignored their request for access to CCTV footage on the day Ephraim went missing. The police in Pampanga, meanwhile, told the family to pursue the case when Duterte is no longer in power. 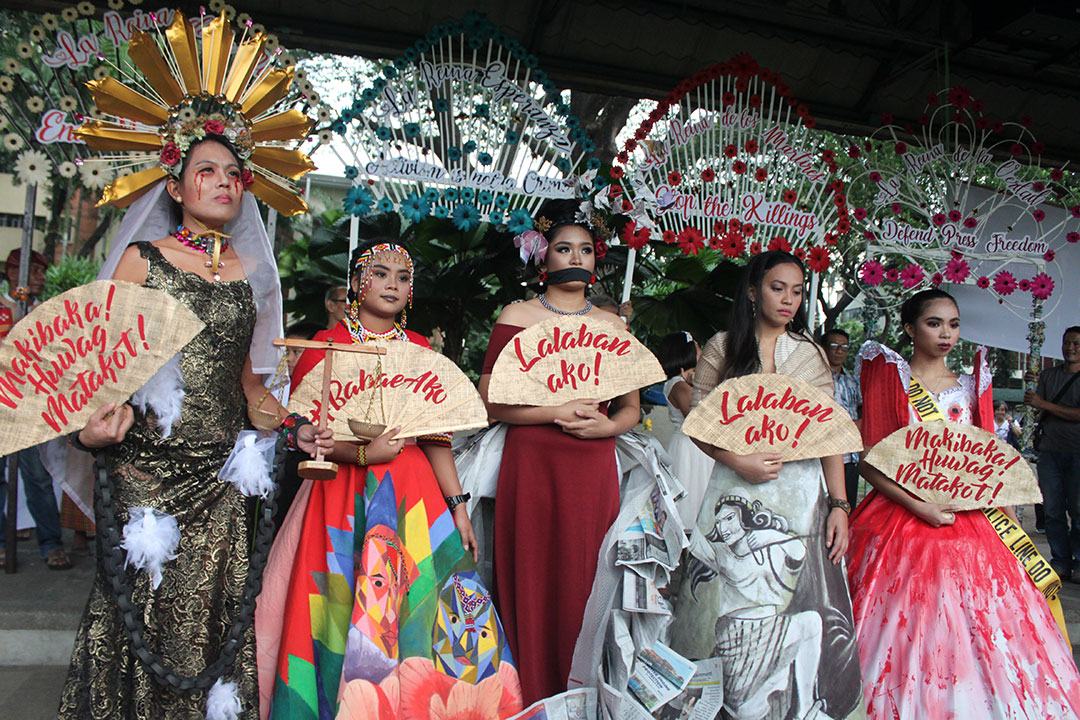 Cristina Palabay, Karapatan secretary general, said the activity, dubbed as May Protest Against Tyranny, was also a contribution to the #BabaeAko #LalabanAko campaign of Filipino women against Duterte’s sexism and misogyny. 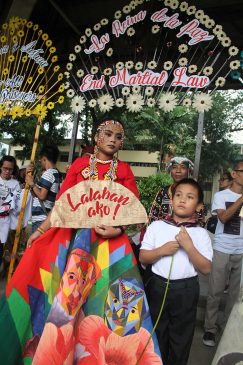 “We will not stand by and allow macho-fascists like Duterte to continue to infringe on women’s and people’s rights,” Palabay said. “We are fighting back.”

Like other Lumad children and youth, Belandres yearns for peace in Mindanao. She was one of those who witnessed the brutal killing of Emerito Samarca, the executive director of the Alternative Learning Center for Agricultural and Livelihood Development, Inc. (Alcadev) and Manobo leaders Dionel Campos and Datu Juvello Sinzo by the paramilitary group Magahat-Bagani Force on Sept. 1, 2015 in Lianga, Surigao del Sur. 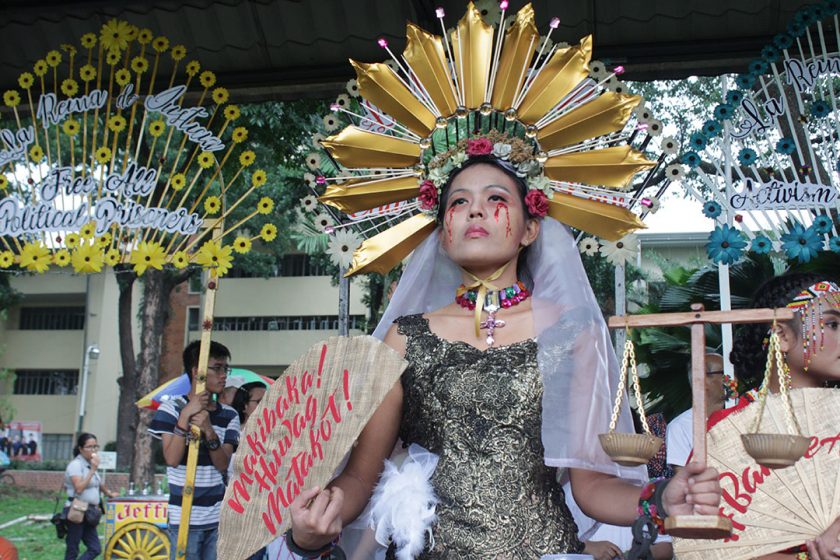 Belandres lamented that the perpetrators of the Lianga massacre are protected by the military. She said that despite the standing warrant of arrest, Bobby Tejero and Loloy Tejero, among others, still roam free. The Tejero brothers were also presented by Duterte as New People’s Army (NPA) guerrillas who recently surrendered to the government. 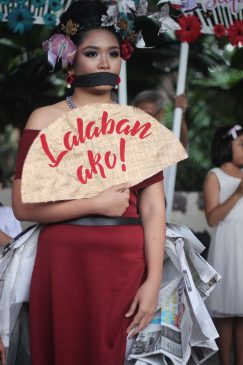 Meanwhile, activist Eleanor de Guzman, as La Reina dela Justicia (Queen of Justice), wore a black and gold dress, her wrists chained. On one hand, she held an unbalanced scale of justice. Marching beside her was her nine-year-old son Julius Rafael.

Her father, peace consultant Rafael Baylosis, and her husband Marklen Maojo Maga, were arrested on separate incidents and were slapped with trumped-up criminal charges. 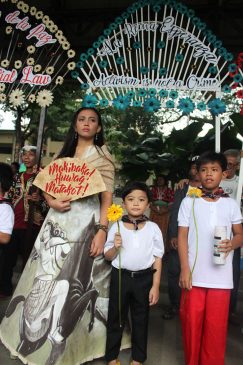 Completing the ceremony was Maria Teresa Omano as La Reina Esperanza (Queen Hope). Her dress was hand painted with the image of revolutionary leader Gabriela Silang to depict women’s defiance to tyranny. A mother of three, Omano said she is angered by Duterte’s tirades against Filipino women.

Jani Llave, one of the designers, told Bulatlat that this version of Flores de Mayo intended to bring a political message across a broad audience. He lamented how Flores de Mayo has been treated as beauty pageants these days and they wanted to show a deeper meaning to the tradition.