You Are Here: Home → 2018 → August → 24 → Millennials, rights activists never ‘moving on’ from Marcos’ sins till justice is served

Millennials, rights activists never ‘moving on’ from Marcos’ sins till justice is served 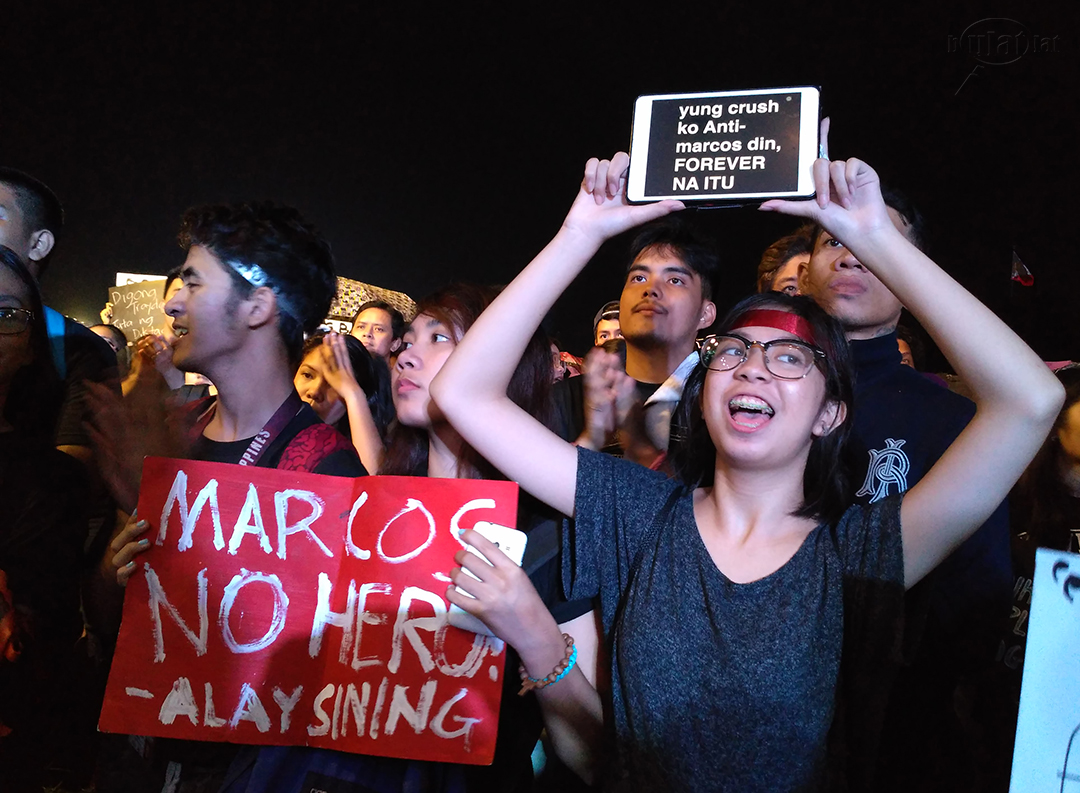 In Philippine politics, when corrupt politicians want the people to move on, what they mean is they want their crimes forgotten.

This was the reaction of Kabataan Partylist Rep. Sarah Elago over the recent pronouncement of Imee Marcos, daughter of the late dictator Ferdinand Marcos and now governor of Ilocos Norte, that the present young generation, known as the millennials, have now moved on from martial law and that the people of her generation should do the same.

“The millennials, the youth in general, have not moved on and we will never move on from the Marcoses’ crimes against the Filipino people. Not until justice has been served to the thousands of Filipinos who were killed, abducted, and tortured under their reign, we will not move on,” Rep. Elago said.

Under President Rodrigo Roa Duterte, the Marcoses have made a major comeback, with an attempt to revise history and empty it of the harrowing tales of the Marcos conjugal dictatorship, with the late dictator’s hero’s burial in 2016.

Human rights group Karapatan said the Marcoses will forever be hunted for their sins against the people and will forever be remembered as “a cabal of murderers, torturers and plunderers.”

Amnesty International said that there were over 3,200 documented extrajudicial killings, 34,000 victims of torture, and 70,000 wrongly imprisoned during the Marcos dictatorship.

“Imee has the audacity to speak on behalf of the millennials, and the discourtesy to address the generation that experienced the horrors and corruption of Martial Law first-hand. The Marcos family are thick-skinned, riding on the popularity of a vile and murderous President to creep back into power,” said Karapatan Secretary General Cristina Palabay.

The Marcoses are slowly creeping back into power with the help of President Duterte, said Palabay.

Recently, there have been reports that Imee had a hand in the brouhaha on the change of leadership in the House of Representative, which overshadowed Duterte’s State of the Nation Address in July. The recount is also in the way for the vice presidency bid of her brother Ferdinand Marcos Jr., the namesake of the late dictator and also known as Bongbong.

“Nobody is in jail for their crimes against the people. Imee, Bongbong, and their ilk are the ones who are stuck in the rut, hounded by their family’s crimes, by the people’s demand that they return instead of live off the money of the people. They are forever memorialised as a cabal of murderers, torturers and plunderers. They’re the ones who can never move on,” Palabay said.

“Indeed, they are the faces of impunity. They are the disgusting poison that the entire country is trying to spit out. In Philippine politics, when corrupt politicians want the people to move on, what they mean is they want their crimes forgotten; they want history revised; they want to forward their political ambitions without accountability,” Palabay said.

Moving forward, not moving on

Palabay noted that instead of “moving on,” the victims of the Marcos dictatorship are actually moving forward in their quest for justice, having filed and won a landmark case reaffirming the accountability of the Marcoses for human rights violations and the passage of law recognizing the atrocities and enabling compensation for victims.

“And more importantly, they are imparting their stories and narratives to the next generations of Filipinos through their continuing struggles, asserting that the Marcoses should be meted out retribution and that system change is needed amid repressive and exploitative regimes,” she said, adding the narratives of the victims of the martial law “contribute to the current struggles, even as we see the Duterte regime’s shameless rehabilitation of the Marcos name and the whitewashing of their crimes.”