You Are Here: Home → 2018 → December → 1 → Context of Talaingod incident | The decades-old struggle of Lumad in Pantaron Mountain Range for ancestral land, right to self-determination

Context of Talaingod incident | The decades-old struggle of Lumad in Pantaron Mountain Range for ancestral land, right to self-determination

MANILA – The incident on Nov. 28 was not the first closure of a Lumad school in Talaingod, Davao del Norte. In 2014, during the administration of President Benigno Aquino, the Salugpongan Ta’Tanu Igkanogon Community Learning Center Inc. (STTICLC) located in the hinterlands of Talaingod also experienced attacks from the military and paramilitary forces.

Their communities are being bombed or if not, militarized. Schools are being occupied by heavily armed soldiers harassing students and teachers, leading to disruption of their classes. They have evacuated several times and returned once again to their communities not only to continue their education but to protect their home, the Pantaron Mountain Range – one of the largest remaining old growth forests in the Philippines.

In light of the recent events, Bulatlat compiled some of its stories on Pantaron Mountain Range to provide context why the government has been deploying battalions of soldiers in Mindanao and why Lumad schools are under attack. 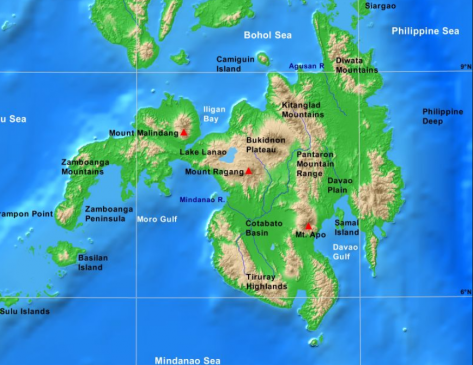 “Life on the run” aptly describes the situation of the Lumads, the collective name for the 18 indigenous ethno-linguistic groups in Mindanao. These tribes have found life more dangerous since the Armed Forces of the Philippines (AFP) launched Oplan Alsa Lumad, the military operation that created the Lumad paramilitary group called Alamara and uses them to fight their own people. (Click here to read more)

In 1997, a warrant of arrest was issued against Datu Guibang and 25 other leaders of his tribe who had fought, using their spears and arrows, the armed goons of [1] Ecowood plywood whose expansion encroached into the tribal lands of the Ata Manobos. Ironically, it was also the year when the Indigenous Peoples’ Rights Act (IPRA), which purported to protect the rights of indigenous peoples, was signed into law by then President Fidel Ramos. (Click here to read more)

‘We shall defend our land, we shall never surrender’

“Land is our life. Water springs from here and we live here.” (Click here to read more)

Since the start of 2014, reports revealed that the Armed Forces of the Philippines has mobilized at least 30 combat maneuver battalions against the New People’s Army (NPA) forces in the South, Far South, Northeast and North Central Mindanao. (Click here to read more)

For 17-year-old Ronald Bongcalas, Salugpongan Ta’Tanu Igkanugon Community Learning Center (STTICLC) is just like any other school where students are taught how to read, write and count. But he considers his school as special because they also learn about sustainable farming and how to enrich their Manobo culture.

And for this, Bongcalas told Bulatlat.com, the military has branded their school as an “NPA school.” (Click here to read more)

Lumad students long for peace in their schools

Indigenous people in far-flung areas have little or no access to the government’s social services like education. With the help of the people’s organization, schools were built for the children of the indigenous people who have to travel for hours to go to school in the town center.

Epoy and his classmates were grateful to the Rural Missionaries of the Philippines for taking the lead in building their school. When they were beginning to fulfil their dreams, state security forces arrived. (Click here to read more)

The Lumad school on Pantaron Range

For the Manobos to turn against the school would be to turn against the fruit of their own blood, sweat and tears, for the STTICLCI is actually borne out of the Lumads’ struggle for their right to self-determination and their territories in Talaingod.

It was built by, and named after the indigenous group Salugpungan Ta’tanu Igkanugon, which means “Unity of People to Defend the Ancestral Land” in Manobo. The group was formed on Nov. 30, 1994, uniting 83 Manobo tribes of Talaingod to defend the ancestral domain against encroachment of the logging company Alcantara and Sons (Alsons). (Click here to read more)

“We refuse to give up the struggle, and they try to kill us; we give up, and they will still kill us. So, it’s better to carry on the struggle.” (Click here to read more)

‘Bakwet’ | Defending the land by leaving

Leaving their mountain communities entail a range of sacrifice on the nature-loving Lumád, who have to stay in cramped, humid tents in the city, subsisting on noodles and sardines, vulnerable to the elements, idle, bored and longing for their farms. Their anxiety increases every day in the city, as they worry that their crops had all rotten, their abandoned poultry stolen and eaten, and their homes ransacked by soldiers – as what they had seen many times coming home from an evacuation.

But being in the city, they are closer to government agencies to whom they bring their grievances, and to the media, to make known to the public the injustice they experienced. (Click here to read more)

To join the paramilitary or to be killed? Talaingod datu chose to leave home

Five soldiers led by Lt. Eric Sumaliday and Lt. JR Bacayan stayed at the living space under his hut. The soldiers also repeatedly asked him about his Lumad group, Salugpungan Ta’tanu Igkanugon (Unity of the People to Defend the Ancestral Land), and its leaders, Datu Doloman Dausay and Datu Guibang Apoga, the latter a fugitive in the last two decades.

Bontulan knew the backdrop of the military harassment is Pantaron Range, the last remaining old growth forest in the country, where logging and mining companies have been kept out by the fierce resistance of Lumád tribes. Although there is also the undeniable presence of the NPA in the area — which contributed to how it had remain intact — the civilian communities are the ones which bore the brunt of military offensives, triggering massive evacuations. (Click here to read more)

The waters of Dulyan flow free

In far-flung areas such as Dulyan, the national government has long failed to provide basic social services to the people. Education, healthcare, and public utilities are still inaccessible for the majority of Filipinos, especially in most rural communities where socio-economic inequity and injustice are apparent and unimaginable.

State abandonment is very visible in every inch of Dulyan’s unpaved roads and battered classrooms and houses. The only state intervention that the community receives is the constant siege of fascist attacks by military and paramilitary groups. Under the banner of counter-insurgency, state forces have been targeting communities like Dulyan that resist land monopolies and destructive ‘development’ projects. (Click here to read more)

‘We only want peace in our schools, communities’

The cases of Amelia Pond and Dominiciano Muya, a teacher and agriculturist respectively, both from the Salugpungan schools of Davao del Norte, highlight how Lumád schools and their staff have been under attack from state security forces, from the past regime and even under President Duterte. (Click here to read more)

Lumad students vow to get justice for slain schoolmate

Bay-ao was shot dead by two members of the Lumad paramilitary group Alamara, Joven and Ben Salangani, who are cousins and residents of sitio Barobo in Palma Gil. Ben Salangani is also with the Citizens Armed Forces Geographical Unit (CAFGU), to which many Alamara men were accredited. The Alamara reportedly threatened that if any of their men were killed in fighting New People’s Army (NPA) rebels, they will take it out on the community. (Click here to read more)

Salugpongan Ta ‘Tanu Igkanogon Community Learning Center (STTICLC) in Talangingod, Davao del Norte said at least five of their campuses have either been occupied or are being harassed by government as the new school year opened today. (Click here to read more)

Lumad organizations Salupongan Ta ‘Tanu Igkanugon and PASAKA Confederation of Lumad Organizations in Southern Mindanao Region said Datu Guibang Apoga, who led the Manobo’s successful resistance against logging and mining operations at the Pantaron Mountain Range, did not surrender nor spoke of giving up their struggle to defend their ancestral land.

“In his speech delivered at the assembly, Datu Guibang Apoga spoke of his desire for the Lumad schools to continue to serve his people. Owing to his failing health and increasing age, he spoke of what he perceived as his inadequacies as the tribe’s tribal chieftain.” (Click here to read more)