Since May 23, 2017, when the entire island was placed under martial law, 93 activists have been killed while 136 have escaped death. More than 1,400 others were arrested and detained. Karapatan revealed there are 815,734 victims of civil and political rights violations.

MANILA – With tubaw on his head and wearing a tribal vest, 43-year-old B’laan leader Kerlan Fanagel marched with fellow Lumad, rights activists and advocates toward the foot of Chino Roces (formerly Mendiola) bridge, May 24. They reiterated their call to end the martial law in Mindanao.

Fanagel, chairperson of Pasaka Confederation of Lumads, is one of those who have sought refuge in Metro Manila for quite some time now. Slapped with kidnapping and illegal detention charges, his face and name included in the military’s “Wanted” posters, Fanagel was forced to leave behind his wife and two children aged 17 and 15.

His fears are not unsubstantiated. Since May 23, 2017, when the entire island was placed under martial law, 93 activists have been killed while 136 have escaped death. More than 1,400 others were arrested and detained, according to human rights alliance Karapatan.

Karapatan revealed there are 815,734 victims of civil and political rights violations since Martial Law took effect. 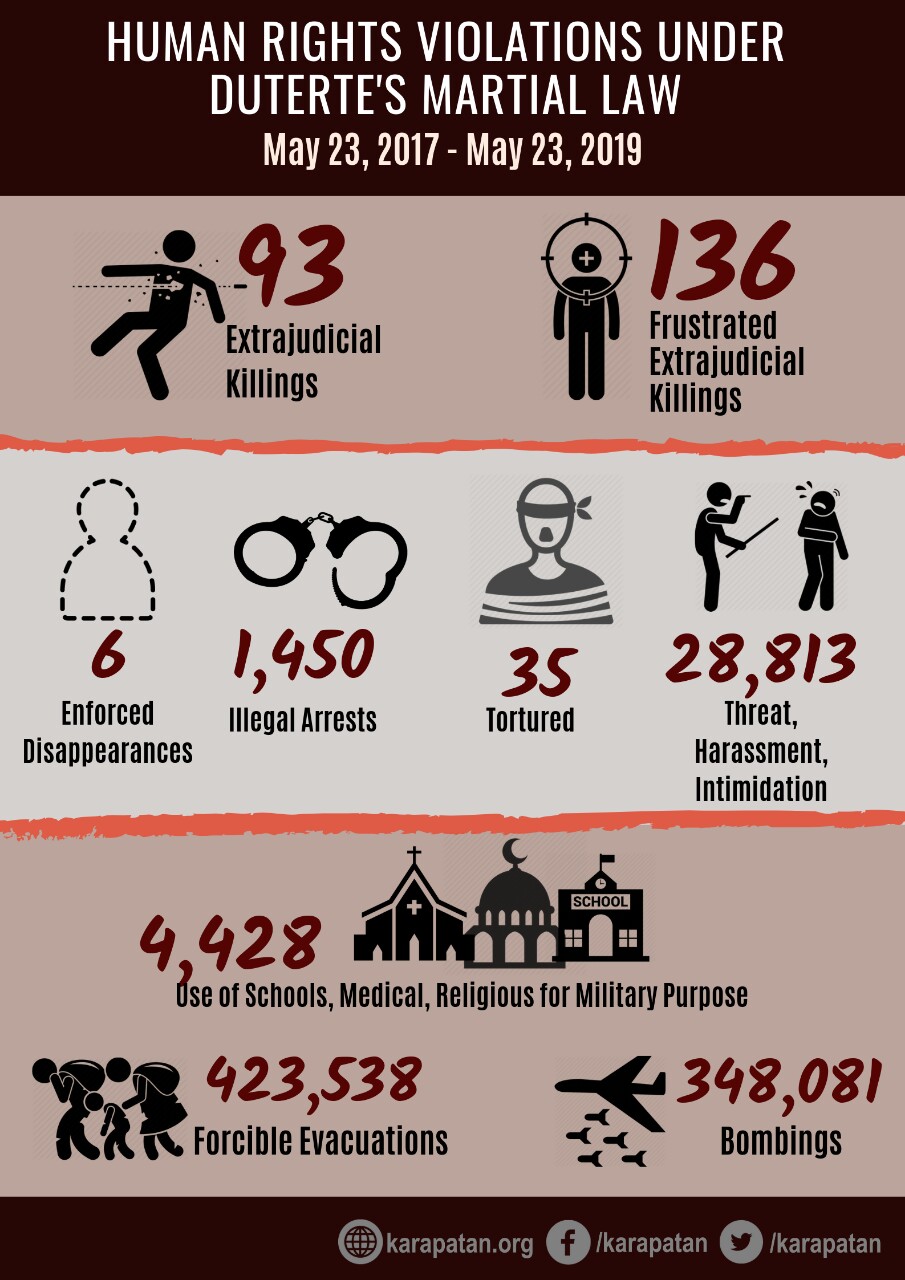 The Duterte administration has not lifted the Proclamation 216, commonly known as Martial Law, in the entirety of Mindanao three years after the Marawi siege has ended.

The Philippine Constitution mandates that in order to proclaim Martial Law, there must be an actual rebellion occuring within the country. And since the military forces already declared “victory” against the rebel Maute Group, many have questioned if the it is truly and legally necessary.

Cristina Palabay, Karapatan secretary general said, “The Duterte government has perpetrated several myths about military rule and has intentionally propagated fear to justify the extension and passage of repressive policies.”

“Martial law did not bring about safety, but rather atrocities such as the Patikul massacre of of 7 youths in September 2018, the Jolo twin bombings, and corruption and abuses among ranks of security forces,” Palabay added.

For Anakpawis Rep. Ariel Casilao, Duterte “is more terrorist than Maute group” for the gross human rights violations perpetrated against thousands of civilians.

Among the most affected are the Lumad children.

According to Save Our Schools (SOS) Network, martial law had shut down 79 Lumad schools, affecting 2,728 teachers and students. Three Lumad students were killed by state forces and paramilitary groups.

Speaking at the protest action, Lumad student Rorelyn Mandacawan recalled how her cousin Obillo Bay-ao  was killed and how soldiers fired their guns while they were holding their graduation rites in March 2017.

“We miss our home. We could no longer play with our schoolmates. We could not swim in the river,” Mandacawan said in Filipino.

Rius Valle, SOS Network spokesperson, lamented, “Instead of upholding the rights of Lumad people, the state forces in connivance with various government agencies and officials have been systematically attacking Lumad community schools.”

The groups said the presence of state forces in Mindanao only brought intimidation instead of the promised security to the people of Mindanao.

“The red tagging and defamation of progressive personalities, organizations, and partylists instilled fear and a chilling effect among their members, constituents, and supporters,” Amirah Lidasan, a council member of Sandugo Movement of Moro and Indigenous Peoples for Self Determination said.

“Even the presence of armed soldiers inside the polling precincts intimidated voters. How can they comfortably and freely vote when soldiers with high powered rifles are within sight?”Lidasan asked.

Despite the harassment and threats, the Makabayan bloc won six seats at the House of the Representatives.

Lidasan said, “The martial law and the repression only strengthened the people’s resolve to fight and struggle for a more peaceful nation.” (With reports from Ronalyn V. Olea)