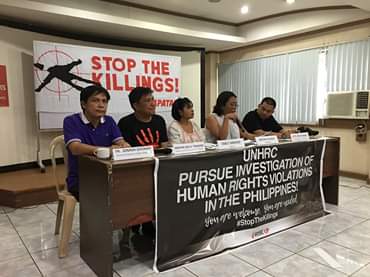 MANILA — Human rights groups said that if the Philippine government would not abide by the resolution calling for investigation of the human rights situation in the country, it should resign as a member of the United Nations Human Rights Council (UNHRC).

In a press conference, July 12, Cristina Palabay, Karapatan secretary general, said the Philippines should resign as a member of the UNHRC if it would not accept and cooperate.

Locsin said in a statement, “[The Philippines], in good conscience, cannot abide by it.”

Palabay criticized both Panelo and Locsin for invoking the “sovereignty” card and for downplaying the resolution.

President Rodrigo Duterte said the UN resolution would not prosper. Asked if he would allow UN investigators in the country, Duterte said in a report, “Let them state their purpose first and I will…”

Mervin Toquero of the National Council of Churches in the Philippines (NCCP) said that barring entry of UN investigators into the country would only prove that “this administration is hiding something.”

Asked to react on Philippine National Police Chief Oscar Albayalde’s claim that the resolution was pushed by the communists, Palabay said it’s a worn-out lie.

In a separate statement sent to the media, the Communist Party of the Philippines said Albayalde’s statement “is extremely laughable and shows the extent to which Duterte’s minions would invent scenarios and act stupid in their desperation to keep the truth from coming out.”

“In their anti-communist delusion, Duterte’s minions have resorted to red-tagging even the UNHRC itself,” the CPP said.

Palabay, meanwhile, credited the victims of human rights violations and other human rights groups and solidarity groups abroad for the pressure exerted in the international community.

For Emily Soriano, whose son was among those killed in Duterte’s “war on drugs,” the UN resolution provides them hope.

Soriano said the families of tokhang victims have turned to international groups and bodies as efforts to achieve justice here have remained futile.

“How could we expect the police to investigate our cases if they themselves are the perpetrators of these crimes?” Soriano told Bulatlat in Filipino.

Amnesty International has pegged the number of victims of war on drugs to 27,000.