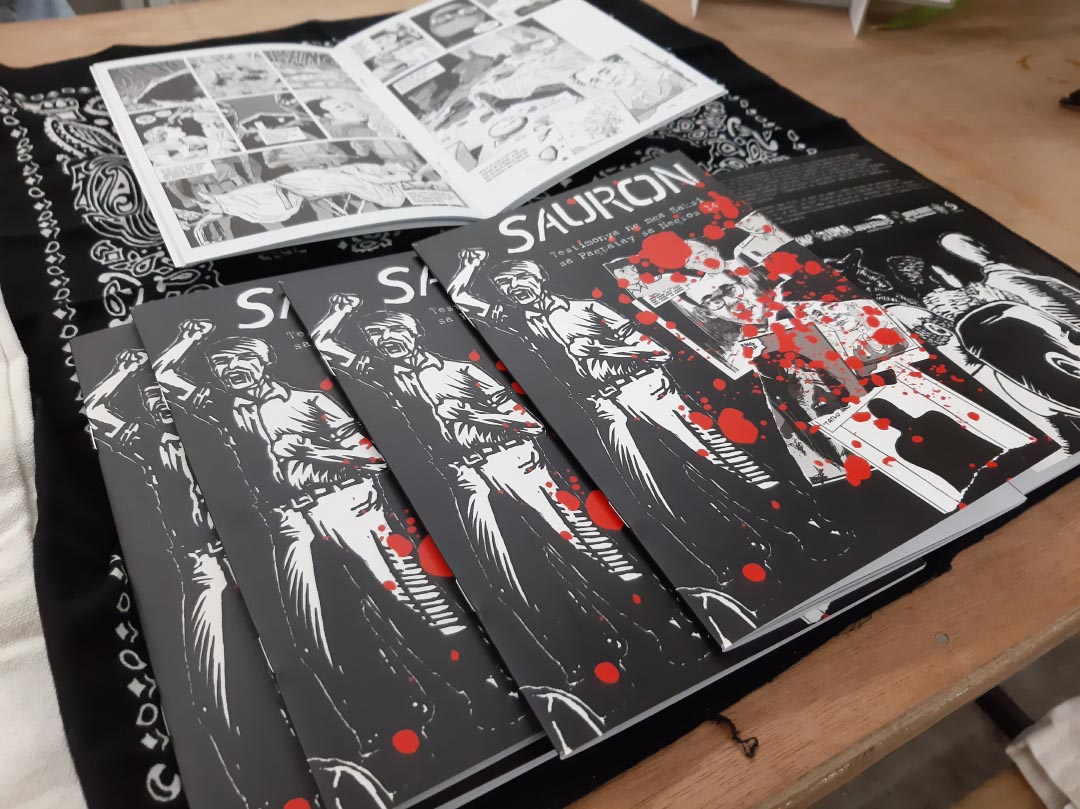 Sauron is filled with stories and illustrations of state forces’ killings, arrests, searches, and torture that took place in three different towns in Negros Oriental on March 30. Gruesome and tragic as they were, one would wish the stories were just fiction. But they were not.

Sauron features five stories from from eyewitness accounts on the killings of Negros 14. The entries were written and illustrated by artists Julius Villanueva, Josel Nicolas, Emiliana Kampilan, Lizette Daluz, and Mervin Malonzo.

The comics was first published in SAKA’s social media accounts and had gone viral ever since its posting. The posts were taken down by Facebook due to massive reporting by suspected trolls.

The title of the comics came from Memorandum Order No. 32 orthe military’s Oplan “Sauron” in Negros island. It was signed by President Rodrigo Duterte November last year as an anti-insurgency policy and supposedly orders the Philippine National Police and Armed Forces of the Philippines to implement “measures to suppress and prevent lawless violence.”

Oplan Sauron was largely condemned by human rights groups and advocates, blaming it for the rampant killings and trumped-up cases against activists.

The documentation of the current attacks to peasant farmers and workers, particularly the killings of Negros 14 last March 30, seeks to spread awareness and urge people to stand against the oppression in rural communities.

“Consistent with SAKA’s pursuit of free land distribution to the country’s peasant majority through genuine agrarian reform, this comics launch renders urgent not only the documentation of state attacks against peasants, but also the building of solidarity among workers in the art, culture, and knowledge industries with the most oppressed sectors to help spread a culture of resistance against feudal abuse carried out through fascist means,” SAKA said in a statement.

In a unity statement, artists vowed to “unmask real offenses and offenders, hold them accountable, file complaints, and maximize all legal processes until they are punished,” and called on AFP to immediately demilitarize Negros island.

“Towards these goals and in pursuit of these principles, we form ourselves into DEFEND NEGROS and call on freedom loving Filipinos to join us… DEFEND NEGROS to win peace and justice necessary for broadly-shared prosperity to flourish in this great island we have grown to love,” they concluded.

The launching of Sauron coincided with SAKA’s second anniversary.