A salary increase, the group said, should adhere to social justice tenet of providing workers with living wages.

MANILA – While today’s pronouncement heeding the call for wage hike was generally welcomed, government workers said it should not be based on the existing Salary Standardization Law, which they find “biased” against rank and file employees.

“It is an overdue response and fulfillment of an electoral promise to organized clamor of government workers for a decent salary increase,” Courage President Santiago Dasmariñas said.

However, Courage, a nationwide umbrella group of government workers union, has long been critical of SSL, which they earlier dubbed as “divisive” and “deceptive.”

Thinktank Ibon Foundation, in a 2015 report, even referred to the SSL as “undemocratic” as the proposed salary increase will only benefit high ranking officials, while those belonging to the lower salary grades will get meager pay hikes. 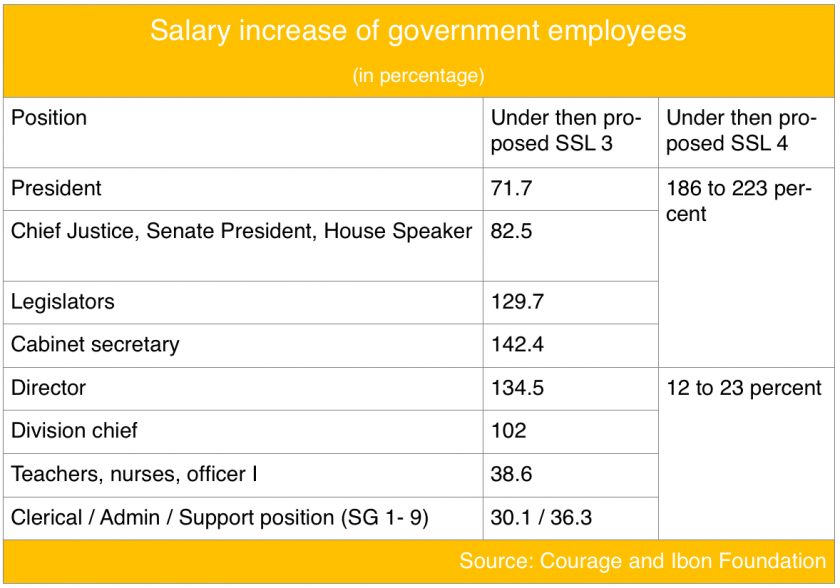 In the weeks leading to Duterte’s fourth State of the Nation Address (SONA), public school teachers and government workers have been drumbeating their call for substantial wage hike. Duterte,in his speech on Monday, said it was time for lawmakers to approve a new version of the Salary Standardization Law (SSL).

Finance Secretary Carlos Dominguez III said in news reports that the government can afford the wage hike, even if it is just “a little bigger” but will “tide you over during these hard times.”

The group argued that following the same SSL scheme is “inequitable” and is “highly biased against lower-ranked employees and lower income earning local government units.”

Dasmariñas, instead, offered a counterproposal, referring to the legislation of a national minimum wage of P16,000 per month for all government workers, per the House Bill 247 filed by Bayan Muna Party-list at the opening of this 18th Congress.

A salary increase, the group said, should adhere to social justice tenet of providing workers with “living wages.”