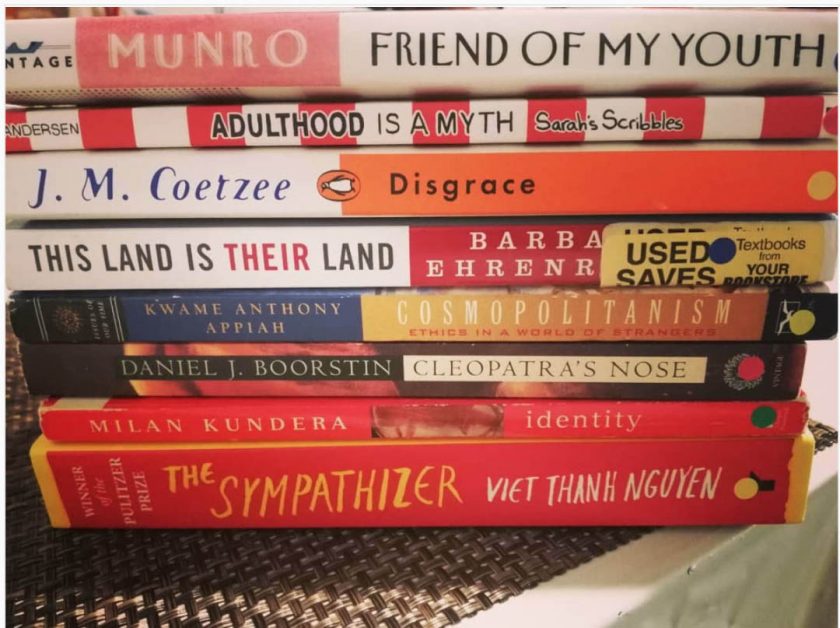 1. Blow-Up and Other Stories by Julio Cortázar, Paul Blackburn (Translator). Unfamiliar, intriguing, but creative narratives and plotlines. Stories about madness, compassion, and complexity of modern living.

2. Smaller and Smaller Circles by F.H. Batacan. The first few pages are surreal, apt description of Payatas. A crime novel, page-turner, and a rare look into the work of NBI and its unacknowledged links with the academe.

3. Salvador by Joan Didion. Reportage of what transpired in El Salvador during a crisis moment. Referencing the United States’ direct and indirect involvement in El Salvador. A backgrounder of the country’s situation which led to the killing of Bishop and now Saint Oscar Romero.

4. History of the Mountain Province by Howard Tyrrell Fry. Historical account of the work of US missionaries in the Cordilleras, the evolution of governance in north Luzon, the story of some wartime guerrillas.

6. Serendipities: Language and Lunacy by Umberto Eco. Fascinating analysis of the work of Dante, bible translations, and the enduring ‘force of falsity’.

7. Big Data: Does Size Matter? by Timandra Harkness. How algorithm affects us all, its mutation into surveillance, its impact on the global and local economies – relevant perspectives about how big data is being applied in the world today and near future.

8. Whose Global Village?: Rethinking How Technology Shapes Our World by Ramesh Srinivasan. Because Global Voices is mentioned in the book. Because it reminds us that people, not technologies, are the driving force in building better societies. 9. Call If You Need Me: The Uncollected Fiction and Other Prose by Raymond Carver. My favorite parts include his meditation about the life of his father, and his decision to pursue the life of a writer.

10. Language and Power by Gary Ives. Textbook reference on how language plays a role in shaping power dynamics.

11. Siddharta by Hermann Hesse. Filled with teachings about the meaning of life, the pursuit of material things, sacrifice, and service to family and community.

12. Warriors, Poets, Friends: My Life in the Mindanao Mountains by Ka Joven Obrero. Grounded perspectives on life as a guerrilla and revolutionary.

13. You Can’t Keep a Good Woman Down: Stories by Alice Walker. Stories of women overcoming hardships and other seemingly insurmountable challenges.

14. The Idea of Communism edited by Costas Douzinas and Slavoj Žižek. Reinterpreting previous reinterpretations of classical tenets of Marxism.

16. The Financial Crisis in Asia and its impact on the Global Economy: a Philippine Perspective by Alejandro Lichauco. A treatise on an alternative model of economics instead of simply subscribing to neoliberal prescriptions.

17. Sisa’s Vengeance: Jose Rizal: A Radical Interpretation by Epifanio San Juan Jr. On why the works of Rizal continue to capture the public imagination and exploring their symbolism in order to understand the present.

18. Haroun and the Sea of Stories by Salman Rushdie. A fable depicting a familiar theme about the battle between good and evil.

19. Breaking the Silence: A War Memoir by Lourdes R. Montinola. A tender recollection of life in Manila from someone who survived the brutality of World War II. 2

0. Portraits: John Berger on Artists. He gave not just valuable insight into the style of artists but also the social conditions that linked the arts to the community.

21. Strengthen the People’s Struggle against Imperialism and Reaction by Jose Maria Sison. I wrote a review about this book which was published by Bulatlat.

22. Fences and Windows: Dispatches from the Front Lines of the Globalization Debate by Naomi Klein. Imagine her finishing the day after attending rallies and sitting down to write her reflections.

23. Natural Causes: An Epidemic of Wellness, the Certainty of Dying, and Killing Ourselves to Live Longer by Barbara Ehrenreich. Sensible critique of the modern health system.

24. Road-side Dog by Czes?aw Mi?osz. Poems and anecdotes on various topics transforming the mundane into something unique and even source of wisdom.

25. On Anarchism by Noam Chomsky. It redirects readers to reconsider Orwell’s socialist leaning; an extended review of the role of anarchism in the Spanish civil war.

26. Liberalism: A Counter-History by Domenico Losurdo. Tour de force review of the shameful past of liberalism as a political philosophy.

27. Friend of My Youth by Alice Munro. Deeply moving stories that inspire nostalgia, imagination, and curiosity about human behavior and our capacity to love and make errors.

29. One Amazing Thing by Chitra Banerjee Divakaruni. Little stories offering lessons that grow on you.

30. Disgrace by J.M. Coetzee. I have little knowledge of post-apartheid South Africa but the novel distills the emotional fabric (or baggage) of that era.

31. Identity by Milan Kundera. Get ready to be immersed into the otherworld inhabited by self-doubting lovers.

32. Brief Answers to the Big Questions by Stephen Hawking. Surprisingly easy to read reflections from a gifted scientist about his work, his collaboration with other scholars, and the future of science.

33. Adulthood Is a Myth by Sarah Andersen. Funny observations of growing up in the 21st century.