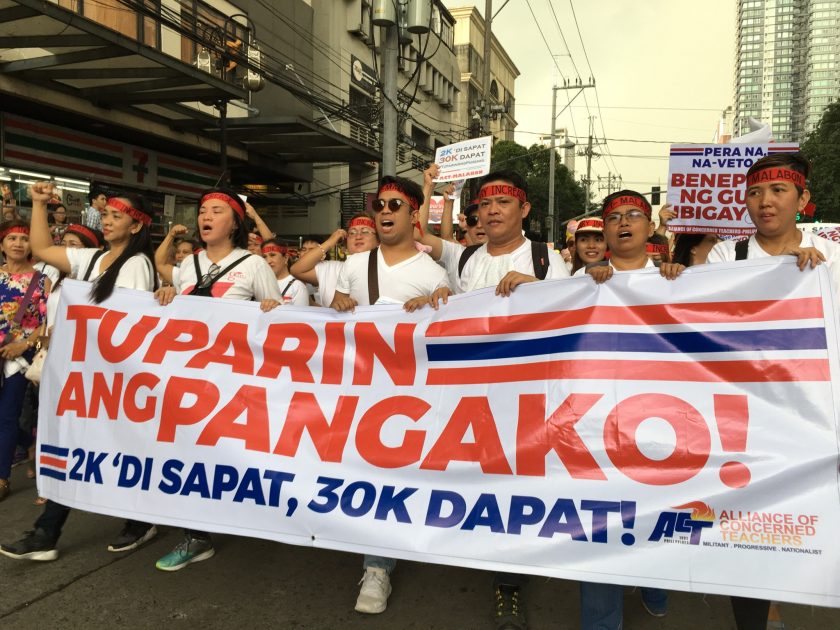 “Even after the full implementation of the Salary Standardization Law V in 2023, the front-liners in education will still be no better off than the police and soldiers in uniform whose salaries were swiftly increased by 50% to 100% by the Duterte administration.”

MANILA – Far from over.

This is how ACT Teachers Rep. France Castro described the struggle for a substantial salary increase for teachers, who, along with thousands of government employees, have been pushing the Duterte administration to look into their take home pay.

“The struggle for a substantial salary increase for teachers that would provide decent lives for them and their families is far from over. Salaries of teachers have been left behind compared to those professions with similar qualifications and workload since the Duterte administration doubled the salaries of its military and uniformed personnel,” Castro said in a statement.

The renewed calls for substantial salary increase for teachers and government employees came in the wake of a Duterte legacy campaign – launched at a day-long forum at the Philippine International Convention Center in Pasay City.

During the presidential campaign, Duterte vowed to increase teachers’ salary. He again reiterated this promise when he asked the House of Representatives to certify as urgent the proposed law to increase the salary of government workers, including public school teachers. As it stands, however, public school teachers will only receive a total increase of P6,000 ($118), which will be spread across four years or about P1,500 ($30) annually.

“This is a far cry from their calls for a substantial increase in salaries since these measly increases given in tranches will only be quickly eaten up away by excise taxes and inflation,” Castro said.

Apart from the salary increase, Castro has also recently filed a proposed law increasing to P5,000 ($98) the personnel economic relief allowance for government employees, currently pegged at P2,000 ($39), saying that it is “high time that government increase this compensation as its last adjustment was 11 years ago and would greatly aid government personnel for a more substantial relief from today’s high cost of living.”

Still, not all in public service were created equal.

Alliance of Concerned Teachers secretary general Raymond Basilio said teachers’ salaries “fall behind those of professionals’ in other fields.” It also does not come close to the doubling of salaries for the police force and soldiers.

“The incessantly rising costs of living amplifies this injustice, forcing teachers deeper into debt and substandard living. We deserve better, our profession deserves to be dignified,” he said.

In a joint resolution approved on Jan. 1, 2018, the base pay of military and uniformed personnel was increased to “take into account prevailing economic realities and create professionalism, exemplary performance and commitment to service.” This, the resolution added, recognizes their “critical role in maintaining national security and peace and order” as they are exposed to “high risk environments.”

As such, the modified base pay schedule, which will be implemented in two years, has significantly increased the salary of military and uniformed personnel. 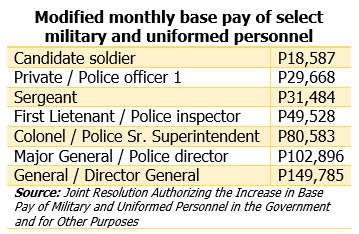 The Department of Budget and Management said in a statement that the salary adjustments for military and uniformed personnel will have an overall average increase of 58.7 percent – with plantilla position “Police Officer 1” enjoying a 100-percent pay hike.

“Even after the full implementation of the Salary Standardization Law V in 2023, the front-liners in education will still be no better off than the police and soldiers in uniform whose salaries were swiftly increased by 50% to 100% by the Duterte administration,” Castro said.

Lawmaker and former public school teacher Castro, for her part, stressed that increasing the salary of government employees and public school teachers is not a priority in the 2020 budget, where massive funds were allotted to wage a war against its own people, “prioritizing the military over social services.”

She added the Salary Standardization Law V, just like its predecessors, does not address inequality, where rank and file employees “continue to be at the losing end.”

To retain the best workers in the public sector, the Alliance of Health Workers urged the government to instead base salaries on “actual economic and family living wage” and to “set the most humane, reasonable and just standard.”

Basilio said, “as we hold President Duterte accountable for his failed promises and continued neglect of the Filipino people’s welfare, so should we fervently carry on our fight for decent pay.”