“Duterte ignored the calls of farmers to put a stop to the rice liberalization law, when its dreadful impacts on our livelihoods is very much evident, affecting consumers, government workers, small rice traders, and workers.”

MANILA – This year’s global action on violence against women and children here in Manila focused on the impact of the lifting of tariffs on imported rice on the lives of farmers, worsening their already impoverished conditions and the dire situation of agriculture sector in the Philippines.

“One devastating year for our farmers and the local rice industry is enough for us to unite and demand an end to this law,” said Cathy Estavillo, Bantay Bigas spokesperson.

Members of the network Bantay Bigas, along with farmers and other rice stakeholders, were among those who joined women activists and progressives in their march to the foot of the Mendiola bridge to hold the annual gathering and to “rise” against various forms of violence against women yesterday, Feb. 14.

Participants danced “Bangon” and “Break the Chain” in between fiery speeches, decrying how decades of subservience to the dictates of the World Trade Organization and the General Agreement on Tariffs and Trade has killed the country’s agriculture sector.

Read: WTO at 10: A Decade of Burden for Poor Countries

Among this is the lifting of the importation tariffs on rice under the Duterte administration. This despite the strong public outcry against it.

“Duterte ignored the calls of farmers to put a stop to the rice liberalization law, when its dreadful impacts on our livelihoods is very much evident, affecting consumers, government workers, small rice traders, and workers,” added Estavillo, who is also Amihan secretary-general.

Apart from the Philippines, One Billion Rising global director and theater actress Monique Wilson said over 180 countries participated, most of them experiencing creeping authoritarianism as well.

Last year, the Philippine government enacted Republic Act No. 11203 or the Rice Liberalization Law. This removed restrictions on rice importation in an agricultural country like the Philippines as President Rodrigo Duterte’s cornerstone solution to the then increasing rice prices.

The over 3.2 million metric tons of imported rice in 2019, which is 40 percent higher than the country’s rice importation back in 2008, resulted to the plummeting of palay farmgate prices, according to Ibon Foundation.

In a statement, Bantay Bigas said Central Luzon farmers have lost at least P25,000 per hectare last year, as palay prices have dropped to P7 per kilo.

In the provinces of Cagayan and Sorsogon, the farmgate price of rice remains at P10 and P11 per kilo, respectively. Farmers in South Cotabato, as noted by a consultation with group Masipag, suffered a 75- to 85-percent loss on their income. In Lake Sebu, for one, their income has been reduced from P12,000 to a measly P2,000.

During the One Billion Rising rally, Southern Tagalog peasant leader Orly Mercado said palay prices in their region have plummeted to a new low of P9 to P11 per kilo.

Farmers’ condition, he added, worsened with the havoc wreaked by the Taal Volcano eruption, destroying not only their livelihoods but also their homes. Mercado said farmers have returned to their homes empty-handed after grueling days at the evacuation site.

Overall, the drop in palay farmgate prices resulted to a total income loss of P84.8 million or about an average income loss of some Php35,328 per rice farmer in 2019. 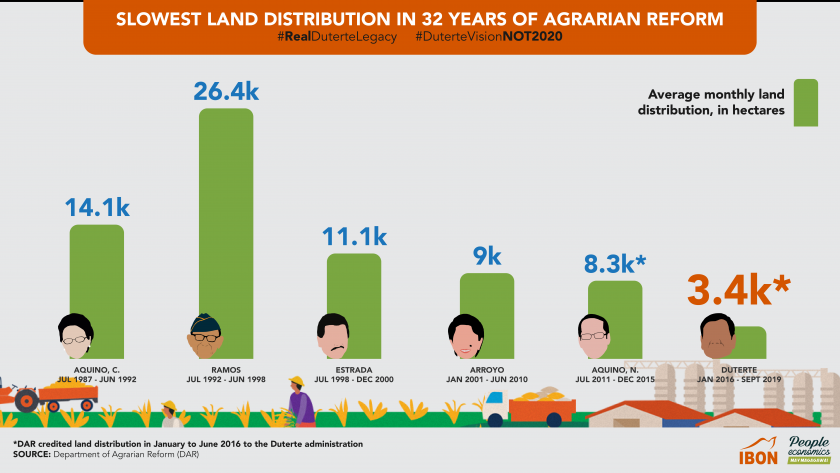 Bantay Bigas also noted that the rice liberalization law threatened the jobs of at least 1,800 employees of the National Food Authority, whose important functions have been virtually stricken out.

Meanwhile, Silver Bonto, head of the National Confederation of Irrigators Association, said the government, too, has no support for irrigators.

While they have at least 1.2 million members, Bonto said, they do not have representation in the National Irrigation Authority after he was axed for being so-called “dilawan.”

He said 65 percent of rice produce here in the Philippines come from their members. But they are deprived of due services and subsidies, needed to bring down the cost of rice production.

Ibon Foundation said the rice liberalization policy is yet another indication of the government’s “long-time neglect and disregard of local rice production and agriculture in general.”

They also decried that rice producers and consumers should not be pitted against each other.

The group added, “farmers and consumers have a common interest in the protection and strengthening of the domestic rice industry towards rice self-sufficiency.”