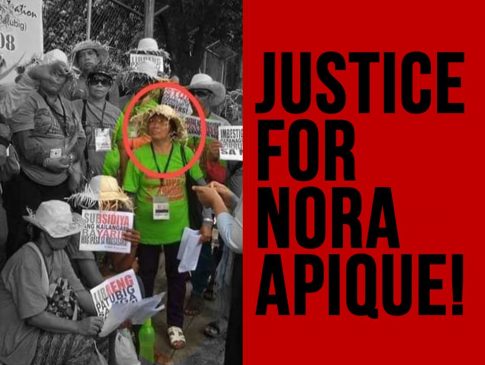 “Apique’s killing show that military operations continue despite the crisis the country is facing and the ‘preventive community quarantine’ being implemented in the province.”

Nora Apique, 66, who was shot by unidentified assailants at 7:00 p.m. yesterday. She was reportedly on her way home when gunmen fired at her in barangay Patong, according to Amihan National Federation of Peasant Women.

Apique was a leader of Kahugpungan sa mga Mag-uuma sa Surigao del Sur. She was also a member of Barangay Agrarian Reform Committee (BARC), and became the chairperson of the Municipal ARC.

She was also a member of the Provincial ARC since 2016. She joined in the 20017 caravan to Manila demanding free irrigation services for farmers.

In a statement, Zenaida Soriano, chairperson of Amihan, said, “Apique’s killing show that military operations continue despite the crisis the country is facing and the ‘preventive community quarantine’ being implemented in the province.”

Bayan Muna Rep. Eufemia Cullamat also condemned the killing of Apique. She said while the country is facing the crisis brought about the pandemic, members of the military in the provinces continue to commit abuses and rights violations.

Cullamat also cited the harassment against her family in Lianga, Surigao del Sur, by the members of the military.

She said after the arrest of her sister, Gloria Campos Tumalon, on March 19, soldiers went to her children and asked about her personal information.

“For what will they use the information about me? Why not ask me personally”, she said.

She said trolls also circulate fake news about her, labeling her as a member of the New People’s Army.

“Authorities have been warning the public about spreading fake news, but they are the ones who are leading it. They should be the one who should be punished,” she added.

She called on the government especially the Philippine National Police and the AFP to stop the attacks on national minorities, respect indigenous people’s right to self-determination.