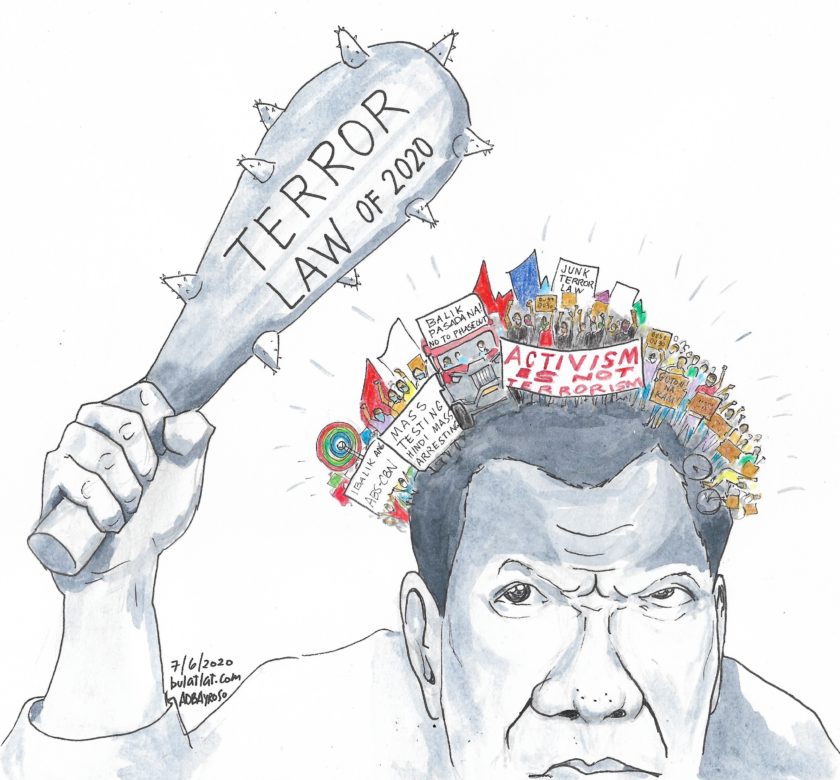 Presidential Spokesperson Harry Roque claimed that the denial to renew the franchise of ABS-CBN is not a “dictator move.”

A few days later, Duterte said, “Without declaring martial law, I destroyed the people controlling the economy and the people, and who don’t pay. They take advantage of their political power.”

Put on the defensive, Roque would later clarify that the President was not referring to the Lopezes but to Lucio Tan, as well as water concessionaires Ayala and Pangilinan groups.

The irony is that Duterte is himself an oligarch. He takes advantage of his political power for economic gains. A 2019 series by the Philippine Center for Investigative Journalism revealed that Duterte, daughter Sara and son Paolo grew richer over the years despite their modest salaries as public officials.

While Duterte claimed to have dismantled oligarchs, he favors other oligarchs surrounding him.

For instance, CLTG Builders, owned by the father of presidential aide and elected senator Christopher Lawrence Go, cornered P2.7 billion in contracts from Department of Public Works and Highways since Duterte became president in 2016.

Duterte’s campaign donor Dennis Uy, meanwhile, got the third license for telecommunications. His influence and money skyrocketed under this administration, that by 2019, Dow Jones research shows that he is CEO, chair or director at 27 firms.

What we’re witnessing is creeping cronyism, not to mention authoritarianism. Essential in consolidating such power is controlling the other branches of government. The House of Representatives has been acting like Duterte’s rubber stamp with the closure of ABS-CBN as the most glaring proof. The fraudulent midterm elections in 2019 sent Duterte’s closest allies to the Senate, and the most vocal critics have been charged with inciting to sedition and other crimes. Supreme Court Chief Justice Ma. Lourdes Sereno was removed from her post and now, 11 of 15 SC justices were appointed by Duterte.

The shutdown of the largest media company in the Philippines is just the latest in Duterte’s recipe for dictatorship. Truth-tellers are criminalized and harassed. Community journalist Frenchie Mae Cumpio remains in prison over trumped-up charges of illegal possession of firearms and explosives.

To ensure that all forms of dissent would be suppressed, Duterte signed Republic Act 11497 which violates constitutionally-guaranteed rights. Without declaring martial law, Duterte can now wield another weapon against those who oppose his pro-oligarch, anti-poor policies amid the raging pandemic.

Under the pretext of fighting COVID-19, Duterte’s Cabinet members now want to invade homes, tokhang-style. For Duterte, the enemy is not COVID-19 but the Filipino people who are speaking out against government’s criminal neglect.

Behind his macho posture and ashen face, Duterte is afraid to the core. He is fighting against the prospect of him being made to account for all his crimes. He is doing everything to stop us, the Filipino people, from exercising our right to have better governance and better society.

We are called upon to resist, and show to the dictator the power of a united people. We owe it to ourselves and to the future generations not to be overcome by evil.